Template:Infobox officeholder Nitin Nohria (born February 9, 1962) is an Indian-American academic. He served as the tenth dean of Harvard Business School. He is also the George F. Baker Professor of Administration. He is also a former non-executive director of Tata Sons.

Nitin Nohria was born in Nohar Rajasthan in baniya (traders) family, India. His father, Kewal Nohria, was the former chairman of Crompton Greaves in India, and was an influence upon Nohria's decision to embark upon a career in business.[1] 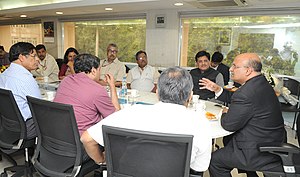 Nitin Nohria with senior civil servants of Government of India in New Delhi with Piyush Goyal.

Nohria served as co-chair of the HBS Leadership Initiative and sat on the executive committee of the University's interfaculty initiative on advanced leadership. Nohria is working with fellow HBS professor Rakesh Khurana, the World Economic Forum and the Aspen Institute to create a business oath, like the MBA Oath, [1] that might be used globally.[3] In a Harvard Business Review piece published in October 2008, Khurana and Nohria linked the connection between professionalism of a profession and the profession's ability to deliver value to society:[4]

On May 4, 2010, Drew Gilpin Faust, President of Harvard University, appointed him Dean of Harvard Business School, effective July 1, 2010.[5] He is the second HBS Dean, after John H. McArthur, born outside the United States and the first Dean since Dean Fouraker in the 1970s to live in the Dean's House on the HBS campus.[6] In January 2014, he tendered an apology on behalf of Harvard Business School for the perceived sexism at the school.[7]

In August 2017, Nohria argued that President Donald Trump's support for "isolationism" was detrimental to American economic prosperity, as it discouraged successful foreigners from immigrating to the United States.[8]

In 2013, a lengthy front-page article in The New York Times described HBS efforts to deal with gender inequality.[10] In 2014, Nohria apologized for HBS on how it had sometimes treated its female students and professors offensively.[11]

Under Nohria as dean for 10 years at Harvard Business School, there was a low percentage of African Americans as enrolled MBA students and in its faculty only had just nine out of 270 faculty members who were black.[12] A faculty member Steven S. Rogers stepped down from teaching at the business school because it had long given short shrift to the black experience[12] and had maintained anti-African practices.[13]

In June 2020, Nohria publicly apologized for failing to mount a more successful fight against racism and pledged to move urgently forward with what he called an “anti-racism action plan.”[14][15]