Navotas, officially the City of Navotas (Tagalog: Lungsod ng Navotas), is a 1st class highly urbanized city in Metropolitan Manila, Philippines. According to the 2015 census, it has a population of 249,463 people.

It is known as the Commercial Fishing Hub of the Philippines, for the city has the third largest fish port in Asia and the largest in Southeast Asia. Although it was established on December 20, 1827, Navotas celebrates its foundation day every January 16. Navotas became a highly urbanized city on June 24, 2007.[1]

The entire region of Navotas was once part of Malabon. According to one legend, the long and narrow delta extended unbroken from north to south along the seashore. The strip of land between the former district of Tondo, Manila and this town was eaten away by the sea until an opening was made. Water began to flow through the opening. The geographical change prompted the people to refer to the place as "butas", "nayon ng butas", or "nabutas", a Tagalog word that means breached or pierced through. What began as a natural channel developed into a regular waterway, now known as the Navotas River. In later years, the place came to be known as "Nabotas", then "Navotas".

It was also known as Hacienda de Navotas; it was once owned by the Dominican friars until it was sold to the Pascual family during the early days of the American regime and developed into a residential estate.

San Jose de Navotas was the name given to the locality after its patron saint, Saint Joseph. On June 11, 1859, a "Superior Decreto" established a new parish and municipality under the supervision of Friar Matias Navoa. The populace was divided into two distinct groups, the naturales (locals) and the mestizos. Mariano Estrellas was the gobernadorcillo (petty governor) of the naturales and Mariano Israel, of the mestizos. Today, because records are incomplete, recognition is only given to the gobernadorcillos for the mestizos. A school in honor of San Jose was built and known as "San Jose Academy."

Navotas is a coastal town in the northwest part of Metro Manila. It is a narrow strip of land with an aggregated shoreline of approximately 4.5 km. In the north, Navotas shares a common border with the town of Obando, Bulacan, along Sukol Creek which separates it from Balt. Along the eastern border runs the Binuangan River, the Daang Cawayan River, the Dampalit River, the Batasan River, the Navotas River, the Bangculasi Channel, the Malabon Channel and the Estero de Maypajo.

It is bordered on the north by Obando, Bulacan along Sukol Creek; on the south by the city of Manila; on the east by Daang Binuangan River, Bangkulasi Channel, Malabon Channel and Estero de Maypajo; and on the west by Manila Bay. 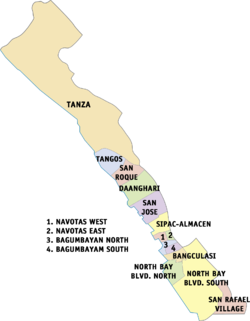 Navotas is politically subdivided into 2 districts, with a total of 18 barangays:

Navotas East is bounded by Barangay Sipac-Almacen to the north, Barangay Tañong of Malabon (via Estrella Bridge over Navotas River) to the east, Barangay Navotas West to the west, and Brgy. Bagumbayan North to the south. Their patron saint is San Ildefonso.Template:Citation needed

The name of Barangay San Jose was derived from San Jose de Navotas Parish, the first place of worship in the town.

Barangay San Roque is bounded by Tangos South to the northwest and north, Tangos North and Tanza, Navotas (via Badeo 5) to the northeast, Brgy. Hulong Duhat, Malabon and Brgy. Flores, Malabon in Malabon City to the east (via Navotas River, Badeo 4), Manila Bay to the west and Brgy. Daanghari to the south. Its name is derived from San Roque de Navotas Parish, the first place of worship in the town.

It is famous for its annual fiesta, every last Saturday and Sunday of the month of January. Every fiesta the whole barangay (including Brgy's Tangos North and Tangos South) is filled with stalls and stores. Also every fiesta of San Roque, A. Dela Cruz St. is full of stalls which sell kalamay, from Batangas.

Barangay Sipac-Almacen is famous for the location of the Navotas City Hall and some points of interest like Navotas National High School, the main high school of Navotas, Navotas Playground, Jollibee, McDonald's and others.

In accordance with Republic Act No. 10933,[4] approved by President Rodrigo Duterte on August 23, 2017 and ratified in a plebiscite on January 5, 2018, Northbay Boulevard South was divided into Barangays NBBS Kaunlaran, NBBS Dagat-dagatan, and NBBS Proper.[5][6]

Pursuant to Republic Act No. 10934,[7] approved by President Rodrigo Duterte on August 23, 2017 and ratified in a plebiscite on January 5, 2018, Tangos was divided into Barangays Tangos North and Tangos South.[5][6]

Barangay Tanza occupied the northernmost portion of the city, including Isla Pulo which is separated from the city proper, and was bounded by Barangay Binuangan and Salambao in Obando, Bulacan to the north, Manila Bay and Barangay San Roque to the west, Barangay Hulong Duhat and Dampalit, Malabon to the east, and Barangay Tangos to the south.

Both Tanza 1 and Tanza 2 are accessible via Badeo 5 in Barangay San Roque, Navotas and the Tanza-Malabon Bridge in Barangay Hulong Duhat in Malabon.

Navotas has been dubbed as the Fishing Capital of the Philippines.[9][10]

In the ship repair sector, the Navotas complex in Metro Manila is expected to accommodate 96 vessels for repair.[11]

With regards to the separation of Navotas from Malabon in 1859 and the organization thereof as a distinct municipality or "pueblo" with its own government and church, this town was headed by the governadorcillos who exercised executive and judicial functions. However, as this locality was composed of two groups the naturales and the mestizos, each of which had its own governadorcillo appointed by the governor-general who was the supreme authority in all local matters, since the inhabitants did not allow choosing their officials. This political system was somehow revoked at the end of the Spanish Regime through the Maura Law of 1883, which guided some of the selected officials to the supervision of an insular authority. During the revolutionary period (from 1898–1902), as the democratic system of local governance was being established via the First Philippines Republic and Malolos Constitution, people of Navotas with high character, social position and honorable conduct gathered in a meeting and elected the chief of the town, the headman of the barrio (barangay) and three officials viz., for police and internal order, justice and civil registry, and taxes and property. In this situation, these elected officials constitute an assembly wherein the chief of the town was the president, the headman, the vice-president, and the justice officer the secretary. In this period, the name of Navotas LGU and its head were changed from "pueblo to municipality" and from "President to Mayor". Philippine Commission, which exercised supervision over local government, appointed the first local official. Gradually, election of officials was allowed.

During the period of the Philippine Commonwealth (from 1935–1945), the 1935 constitution ushered. This provided that the President of the Philippines should exercise general supervision over all local governments. This allowed Navotas to have three leaders. This trend from 1946 to 1972 (during the second Philippine Republic) was toward decentralization. Congress passed laws giving more autonomy to Local Government Units through the grant of additional powers and lessening of national control affairs. This created four (4) Mayors of Navotas. During the Martial Law Period, President Marcos had changed the structure and functions of LGU's, thus decentralization suffered the set back with the concentration of power on his hands. After December 31, 1975 (expiration of tenure of office of the local elective officials), the President assumed the power of appointment of the officials as authorized by the people in a referendum held on February 27, 1975. During the Marcos Regime, Navotas had two Mayors.

The Main Building of the Navotas Polytechnic College.

Navotas has 15 public elementary schools and 6 public secondary schools including Navotas National High School and Kaunlara High School.[13] The Navotas Polytechnic College located at the North Bay Boulevard South in Kaunlaran Village is owned and operated by the city.

Transportation in Navotas are composed of different vehicles.