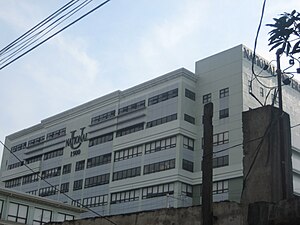 The National University (NU), colloquially National-U, is a private non–sectarian coeducational university located in Sampaloc, Manila, Philippines. The founder of the University, Mariano F. Jhocson Sr., established the institution on August 1, 1900 as Colegio Filipino in Quiapo, Manila. It is considered as the first private nonsectarian and coeducational institution in the Philippines and also, the first university to use English as its medium of instruction, replacing Spanish language.[1]

With its main campus in Sampaloc, Manila, the university has been expanding by setting secondary campuses. Other campuses of NU includes: NU Laguna (Sports Academy), NU Fairview, NU Mall of Asia (College of Dentistry), NU Baliwag, and NU Dasmariñas.

Mariano F. Jhocson Sr. founded Colegio Filipino on August 1, 1900, Jhocson Residence in Palma street, Quiapo, Manila.[2] Only a handful of students at that time were enrolled in the fledgling school and they were in the elementary and secondary levels. Mariano Sr. served as the college director, instructor, and janitor. He began business courses in bookkeeping and accounting. This prompted a name change as it became known as Colegio Mercantil, awarding the diploma of Perito Mercantil.[2] A short time later, Jhocson Sr. collaborated with attorneys Simeon C. Lacson and Ricardo C. Lacson and established the Philippine Law School.[2] From Colegio Mercantil, the Board of Trustees changed the name of the institution to National Academy in 1916. Due to continuous growth of the Academy, liberal arts courses were offered.

After 21 years of service in the field of education, the Board of Trustees applied for university status to the Department of Public Instruction. Thus the school became known as National University on June 17, 1921. The university installed, on that same day, Senator Camilo Osías, a Filipino educator, as the first President of the university.[2] The Colleges of Education and Commerce were opened in the same year. During the following years, the Colleges of Pharmacy and Dentistry were opened in 1922. The College of Engineering, initially offering Civil Engineering opened in 1925, and the Normal School in 1930. Sanitary Engineering was offered in 1930.[2] Bachelor's degrees in Chemical, Electrical, Industrial, Mechanical Engineering and Architecture and Arts were opened. Master in Sanitary Engineering was also organized.[2] Computer Science was opened in 1990, Marine Engineering, Computer Engineering and Electronics and Communications Engineering in 1994. College of Nursing was offered in 2004, Hotel and Restaurant Management in 2008 and Information Technology in 2009.[2]

A fire broke out on January 1, 1998 and razed four buildings of the university which are the old Main Building, Law and Commerce Building, Elementary Building, and Graduate School Building. The university was able to re-open its doors after three weeks of restoration work and used Mariano F. Jhocson Memorial Building[2] The College of Dentistry Building, built in the 1920s, was the only building in the NU campus that remained unscathed in the fire.[3]

In 2008, the SM Group of Companies acquired majority ownership of the National University.[4]

A new logo of the National University was unveiled on October 17, 2017. The new brand features the school's colors and a shield which was inspired from the old university logo.[5]