National Shrine of Our Lady of Lourdes

The National Shrine of Our Lady of Lourdes, ((Filipino: Pambansáng Dambana ng Mahal na Birhen ng Lourdes) better known as Lourdes Church, is a Roman Catholic national shrine in Quezon City, Philippines. The church is administered by the Order of Friars Minor Capuchin of the Philippine Ecclesiastical Province and under the Vicariate of San Pedro Bautista of the Diocese of Cubao.[1]

The original church was located in Intramuros until it was destroyed during the Second World War.[2] The altar image of Our Lady of Lourdes dating from 1894 was hidden and spared during the bombing.[3] The present church was completed and inaugurated in 1951.[3] In 1997, it was declared as a national shrine by the Catholic Bishops' Conference of the Philippines.[1]

Dedicated to Our Lady of Lourdes, the church celebrates its feast on February 11. Pope Francis granted a decree of Canonical coronation towards the image in 22 August 2020. 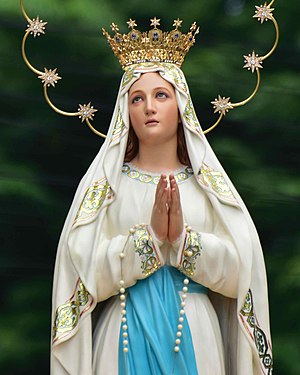 The venerated Marian image crowned by Pope Francis on August 2020.

Eleven missionaries from Spain arrived in Manila on 13 May 1886 and stayed with the Franciscans in Intramuros.[4] Six of the friars left while the remaining five continued to provide the spiritual needs of the area until they built the first Capuchin house in Gen Luna Street in Intramuros, Manila, opening it to the public on 8 May 1892.

Father Berardo de Cieza requested Manuel Flores to sculpt a statue of Our Lady of Lourdes later that year. A second image was sculpted by the same person with the guidance of Father Antonio of Valencia. In September 1897, Architect Federico Soler started the enlargement of the chapel with help from donations from a Mr Moron. The new church dedicated to Our Lady of Lourdes was inaugurated on 3 February 1910.[5]

When the Second World War erupted, the image of Our Lady of Lourdes was kept in the sacristy of San Agustin Church (Manila). It was found intact after the war and was transferred to the chapel of the University of Santo Tomas and later moved to Santa Teresita Chapel in Mayon Street, Quezon City.[4]

The Capuchins were able to obtain official authorization from the government on 9 February 1946 to the restore the church of Lourdes but decided to build a bigger church on an acquired 10,500 square meter lot located in Retiro Street, Quezon City. The construction of the new church started on 30 January 1950 by Engineer Marquez under the supervision of Father Bienvenido of Arbeiza as Custos.[5]

On 10 February 1951, the image of Our Lady of Lourdes was transferred to the new church from the temporary shelter in Mayon Street. The church was inaugurated on 15 August 1951, by the Archbishop of Manila, Monsignor Reyes who officiated at the mass which was attended by many important people including the President of the Philippine Senate, Don Mariano Jesus Cuenco who represented the Spanish Embassy and Miss Gullon, daughter of the Ambassador.[6][5]

On 24 January 1997, the church was declared National Shrine of Our Lady of Lourdes by the Catholic Bishops' Conference of the Philippines.

The church is located on Kanlaon Street at the corner of N.S. Amoranto Street in Sta. Mesa Heights, La Loma, Quezon City. Its boundaries include:[2]

The National Shrine of Our Lady of Lourdes covers six parishes:[2]