National Historical Commission of the Philippines 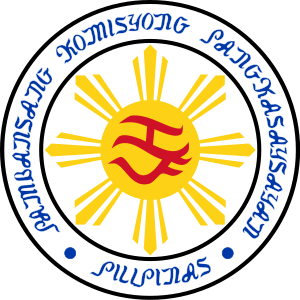 The National Historical Commission of the Philippines (NHCP), formerly the National Historical Institute, was created in 1972 to integrate the diverse functions of various historical agencies. Its aim is to strive toward "a Filipino society with citizens informed of their history, who love their country, and are proud of their cultural heritage."

NHCP is responsible for the promotion of Philippine history. It has the following functions:

The forerunner of NHCP was the Philippine Historical Research and Markers Committee (PHRMC), which was formed in 1933 under the order of American Governor-General Frank Murphy. The directive of PHRMC was to identify, designate, and appropriately mark the many antiquities abounding in the Philippines, so that they may not be lost to posterity. An American journalist named Walter Robb was chosen to head the committee. Other members included Fr. Miguel Selga, S.J, Prof. Otley Beyer, Prof. Jayme C. De Veyra, Prof. Conrado Benitez, Dean Edward Hyde and Eulogio B. Rodriguez.

The PHRMC was abolished once the Commonwealth Government was inaugurated. On 23 January 1937, the Philippine Historical Committee (PHC) was signed into existence. It took on the same responsibilities as its predecessor for about five years, up until the outbreak of World War II. While the country was occupied by Japanese forces, the functions of PHC were absorbed by the Commission of Education, Health, and Public Welfare. PHC was reestablished on 20 January 1947, six months after the inauguration of the Third Philippine Republic. It was placed under the Office of the President, then later transferred to the Department of Education.

During its 28 years of existence, the PHC was able to install about 444 historical markers all over the Philippines. It was also able to acquire historical shrines such as Mabini Shrine in Tanauan, Batangas and its counterpart in Manila and the Juan Luna Memorial Shrine in Badoc, Ilocos Norte. The PHC was also responsible for reconstructing Jose Rizal's home in Calamba, collecting about 600 rare items and taking charge of concerns about naming and renaming of streets, plazas, towns, and other public sites.

Meanwhile, alongside PHC, the Jose Rizal National Centennial Commission (JRNCC) was also created by virtue of Executive Order No. 52 dated 10 August 1954, in order to take charge of the preparations for Rizal’s birth centenary. For about six months, this commission published books on Rizal's works. JRNCC became the Rizal Presidential Committee on 1 July 1962, after then President Diosdado Macapagal issued Executive Order No. 14. Before the end of the year, Macapagal issued Executive Order No. 28 that amended EO No. 14, which paved way for the creation of the National Heroes Commission (NHC), with the additional task of conducting preparations for the centennial birth celebrations of Filipino heroes and luminaries. The NHC was placed under the direct supervision of the Secretary of Education. Meanwhile, the Rizal Shrine in Calamba was placed under the supervision of the Director of the National Museum, while research and publication works were directed by the Director of the National Library.

In 1962, there was a social and political clamor for the creation of a historical body with functions and duties broader than those of the existing PHC and NHC. In 1962 three bills were filed, one from the Congress and two from the Senate. Said bills possessed the same objective—the creation of a historical commission. Then Senators Camilo Osias and Eulogio Balao co-authored Senate Bill No. 18 approved by the Senate on 9 March 1964, while House Bill No. 2241 sponsored by then Representative Salih Ututalum was approved by the Congress on 7 May 1965. To fuse Senate Bill No. 18 and House Bill No. 2241, a conference was held on 18 May 1965, attended by members of both houses. Then Senator Francisco Rodrigo amended the title of the proposed historical body from Heroes Commission to Historical Commission. The fused bill was finally approved on 19 June 1965 as Republic Act No. 4368.

From 1 July 1965, the NHC and the PHC were merged and named the National Historical Commission, which started to function as a separate bureau under the Department of Education and Culture. Its functions were divided into research, administration of shrines, monuments and markers, and general administration. Under the chairmanship of Mrs. Carmen Guerrero-Nakpil, activities were launched in full force, despite limited funds. One of the major projects of NHC was the floating museum dubbed as KASAYSAYAN that brought NHC to the public in various places around the Philippines. This effort was continued by succeeding heads of the agency.

On 24 September 1972, in accordance with Presidential Decree No. 1 otherwise known as an Act Reorganizing the Executive Branch of the Government, the NHI was created. In line with this aim of streamlining government entities performing identical or parallel functions with that of NHI, agencies like the NHC, Intramuros Restoration Committee, Roxas Memorial Commission, Quezon Memorial Committee, Emilio Aguinaldo National Centennial Commission, Gomes-Burgos-Zamora Centennial Commission, and the Pinaglabanan Commemorative Commission were abolished while transferring all of their functions, records, appropriations, records, and properties to the NHI.

On 27 July, 2009, then President Gloria Macapagal-Arroyo approved the Republic Act No. 10086, titled "Strengthening People's Nationalism through Philippine History Act," changing the nomenclature of NHI into NHCP.