sMountain Province is a landlocked province of the Philippines in the Cordillera Administrative Region in Luzon. Its capital is Bontoc.

Mountain Province was formerly referred to as Mountain in some foreign references. The name is usually shortened by locals to Mt. Province. The province was named so for being in the Cordillera Central mountain range found in the upper realms of Luzon island.

Mountain Province was also the name of the historical province that included most of the current Cordillera provinces. This old province was established by the Philippine Commission in 1908,[1][2][3] and was later split in 1966 into Mountain Province, Benguet, Kalinga-Apayao and Ifugao.[4][5][6]

The province is also known for its mummy caves, which contain naturally mummified bodies, and for its hanging coffins.[4]

The area of the Cordillera mountains proved difficult to control by the Spaniards. During the long Spanish rule, not much was done to bring the province under control. From 1566 to 1665, they sent expeditions to conquer the land but the rugged terrain and hostile indigenous population at the time were major obstacles to complete subjugation.[7] The first serious effort to subjugate them was made in 1785 when soldiers were sent from Cagayan to put down a revolt of the Kalingas. A famous Spanish explorer, Guillermo Galvez, conducted more than 40 forays to the mountainous region.[8]

Formerly called La Montañosa by the Spanish colonizers due to its mountainous terrain,[4][9] the area was subdivided into 6 comandancias politico-militar.[10]

On August 19, 1908, during the American rule, the Philippine Commission enacted Act No. 1876, which organized the entire area of the Cordilleras into one large province, named Mountain Province.[1][3][4][11]

The first governor was Samuel Cane, and the town of Bontoc was made the capital. It was originally composed of the sub-provinces of Amburayan, Apayao, Benguet, Lepanto-Bontoc, Ifugao and Kalinga.[3][9] 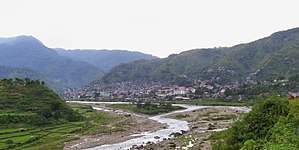 Situated within the Cordillera Central, Mountain Province is 83% mountainous while 17% make up hills and levels. The province has many rivers, waterfalls, mountains, and caves. The central and western areas of the province are characterized by rugged mountains and steep cliffs, while the eastern portion has generally sloping terrain.[4][9]

An Anglican church in Sagada

Anglicanism predominates in the province with approximately 60% adherence with the other religions such as Roman Catholicism, Seventh-Day Adventist Church, Iglesia Filipina Indepiendente, Iglesia ni Cristo and Free Believers in Christ Fellowship.

Mountain Province is the only predominantly Protestant province in the Philippines.

The province has several rice terraces in seven of its different towns:[9]

The mountainous province also offers excellent mountain climbing experiences with two of its mountains among the top 10 highest points in the Philippines: