Mount Hamiguitan is a mountain located in the province of Davao Oriental, Philippines. It has a height of Template:Convert. The mountain and its vicinity has one of the most diverse wildlife populations in the country. Among the wildlife found in the area are Philippine eagles and several species of Nepenthes. Some of the latter, such as the Nepenthes peltata and Nepenthes micramphora, are endemic to the area.[1][2] The mountain has a protected forest area of approximately 2,000 hectares. This woodland is noted for its unique pygmy forest of century old trees in ultramafic soil, with many endangered, endemic and rare species of flora and fauna.[3][4]

The Mount Hamiguitan range, with an area of Template:Convert, was declared a national park and a wildlife sanctuary in 2003.[5] In 2014, the park was inscribed as a UNESCO World Heritage Site, becoming the first in Mindanao and the sixth in the Philippines.[4]

Mount Hamiguitan is part of the Eastern Mindanao Biodiversity Corridor.[6] Conservation of the mountain range is a multisectoral effort done involving the provincial government of Davao Oriental, the Department of Environment and Natural Resources, local communities, and indigenous people.[7][8]

Mount Hamiguitan is located in the province of Davao Oriental in the southeastern part of the island of Mindanao, Philippines. It occupies the land area within the political boundaries of Mati, San Isidro, and Governor Generoso.[5]

Inventory of flora species in the mountain and its vicinity showed that its montane forest has the highest species richness of plants with 462 species, followed by its dipterocarp forest with 338 species, mossy forest with 246 species and agro-system with 246 species. The mountain also harbors 45 species of orchids, 23 of which are endemic to the Philippines.[9] Some of the plants commonly found on Mount Hamiguitan include the following:[4] 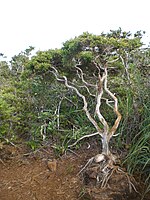 A tree growing in the dwarf forest of Mount Hamiguitan

The International Union for Conservation of Nature (IUCN) Red List has identified at least 11 endangered vertebrate species. The Philippine Council for Agriculture, Forestry and Natural Resources and Development (PCARRD) reported that the mountain is inhabited by five endangered species, 27 rare species, 44 endemic species and 59 economically important species. The following species can be found in the area:[4]

In June 2014, the Mount Hamiguitan Range Wildlife Sanctuary was added to the UNESCO list of World Heritage Sites. Prior to this, the site has already been declared an ASEAN Heritage Park.[13]