Misamis Occidental (Cebuano: Kasadpang Misamis; Subanen: Sindepan Mis'samis; Filipino: Kanlurang Misamis) is a province located in the region of Northern Mindanao in the Philippines. Its capital is the city of Oroquieta. The province borders Zamboanga del Norte and Zamboanga del Sur to the west and is separated from Lanao del Norte by Panguil Bay to the south and Iligan Bay to the east. The province of Misamis was originally inhabited by Subanens who were an easy target by the sea pirates from Lanao.

The province is named after the early settlement of the Spaniards at the entrance to the Panguil Bay. The name Misamis is believed to have been derived from the Subanen word Kuyamis which is a variety of coconut, the staple food of the early settlers. During the years the name persisted as an inference of the geographical location, and upon the advent of the Spanish settlers, the word kuyamis easily gave way to the more convenient pronounceable but corrupted word Misamis.[1]

The area of now Misamis Occidental was first occupied by Subanen and later Visayans settled in the coastal areas. The name Misamis is derived from Subanen word kuyamis which is a variety of coconut. During the 1750s was the time that the coastal villages in Southern Luzon, Visayas and Mindanao suffered attacks from bands of Muslim pirates, who burned houses and crops, and captured people to be sold as slaves in Maguindanao, Sulu, Borneo or the islands now known as Indonesia. In response, the colonial government in Manila created a flotilla and appointed a Spanish Jesuit missionary, José Ducos, as its commander.

After several successful battles against the pirates, when some peace had been restored, it was decided to build a stone fort at the mouth of Panguil Bay, at a place called Misamis, and Ducos was put in charge of the construction. The construction began in 1756. It was officially called “Fuerte de la Concepción y del Triunfo.”[2]

Misamis Occidental is located near the narrow strip of land linking Northwestern Mindanao, to the North-central part of the island. Covering a total area of 2,055.22 square kilometres (793.52 sq mi), the province is bounded on the northeast by the Mindanao Sea, east by the Iligan Bay, southeast by the Panguil Bay, and the west by the Zamboanga del Norte and Sur. Except along the coastal area, hilly and rolling land characterized the provincial terrain. Towards the western border, the terrain is particularly rugged.

Misamis Occidental comprises 14 municipalities and 3 component cities, which are organized into two legislative districts and further subdivided into 490 barangays. 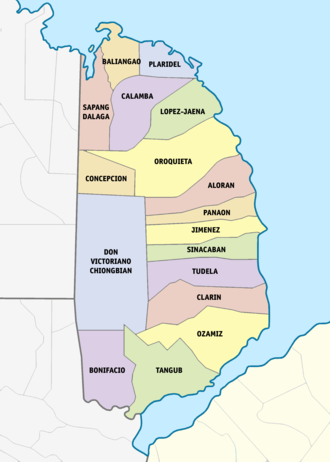 The dense population along the coast consists mainly of ethnic Cebuanos. Thus, Cebuano is the lingua franca of the province. Most of the native Subanens live in the interior uplands.

As of 2013, Roman Catholicism remains the predominant faith of the people of Misamis Occidental having 70 percent affiliation and the second most members are with the Iglesia Filipina Independiente or Aglipayan Church with 20% while several Protestant Churches as well as Islam are the minorities.

The province economy depends firstly on fishing, secondly on coconuts, thirdly on rice. The province has 169 kilometres (105 mi) of coastline fronting the rich fishing grounds of Panguil and Iligan bays. It also has the biggest area of brackish water fishponds in the region. Tangub City is a fishing port on Panguil Bay famous for seafood. Coconut is the chief crop. This is processed into oil, desiccated coconut, and coir, most of which are shipped to Cebu. Coconut processing is the main industry in Oroquieta City. Other crops grown are rice, corn, abaca, coffee, cacao and rubber.

Wood is the major forest product. Predominant species are the lauan group, apitong, tanguige yakal, and Philippine mahogany. There is also an abundant supply of bamboo, rattan and various vines. Forest land in the province has an area of 66,002.46 hectares; 53,262 hectares of which are considered a national park (which has legal implications).

The province has a considerable deposit of clay especially in the municipalities of Lopez Jaena and Concepcion. Plaridel is the largest in rice production, and the longest coastal town in the province.

There are also an abundant sources of sand and gravel.

The province is traditionally a net exporter of various commodities. Historical data from the Ozamiz Port District of the Bureau of Customs show that outgoing commodities, which is mainly of coconut products, far outweigh incoming cargoes.

Locally fabricated agri-industrial machines and equipment are also available in the province.