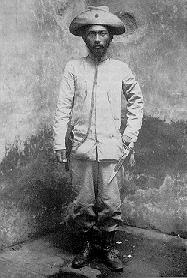 Malvar was born on 27 September 1865 in Santo Tomas, Batangas to Tiburcia Carpio and Maximo Malvar, a sugarcane and rice farmer.

Malvar was elected gobernadorcillo of Santo Tomas in 1980. He gained influence, denouncing the level of control friars had over the lives of Filipinos in their area. During the election campaign, the opposing candidate Friar Garces did everything to gain control over Batangas. Anti-friar sentiment grew in the area and the people became ready for a revolution.

Andres Bonifacio who led a revolution in Manila was not successful, but Emilio Aguinaldo scored significant gains in Cavite and was able to push across the Batangas border in late September 1896. This was the beginning of Malvar’s life in the military. In 1897, he was able to consolidate the leadership in Laguna, Tayabas, and Batangas and strengthen the revolution. He was opposed to negotiating peace with Spain, but other leaders officially ended the fight for independence by signing the Pact of Biak-na-Bato. He traveled around the province of Batangas to make sure the terms of agreement were met and left for Hong Kong as part of the negotiated terms.

Shortly after the Spanish armada was decimated, fighting broke out again in May 1898. With the help of the Americans, Malvar returned in mid-May. By July, he was able to liberate a big portion of Batangas. Local governments had already been set up as the first shots were being fired in Manila to mark the beginning of the Philippine-American War.

In May 1899, Malvar’s brigade in Batangas was ordered to reinforce troops in Muntinlupa to prepare for an assault on American garrisons. The battle started lightly in Batangas but the situation changed when the American command decided to pacify the rest of the Tagalog region. Malvar retreated slowly to Calamba and supervised the defense of Batangas from there. He created a trench defense around Santo Tomas and Tulo, Laguna. In January 1900, the Americans came to assault the defenses in Batangas and Malvar’s force was easily overrun. As Malvar’s army suffered defeats, it started dissolving. Malvar had been mainly hiding in the hills around Makiling when the order was given to conduct guerilla warfare. He understood that it was essential to maintain favorable relations with the civilians because his army’s success depended on their help. He started seeing the benefits of cooperating with their new colonial masters but even if the majority were giving support, it was impossible to get what they needed.

Aguinaldo was captured and shortly after, his successor General Mariano Trias also surrendered. Malvar was then tasked to take over what was left of the resistance. By April 1902, many of Malvar’s former officers had changed sides and had become volunteers for the American force. On 13 April 1902, Malvar and his family surrendered and by the end of that month, most of his troops had also surrendered and the battle for Batangas was over. Malvar retired to a quiet farming life and died on October 1911.