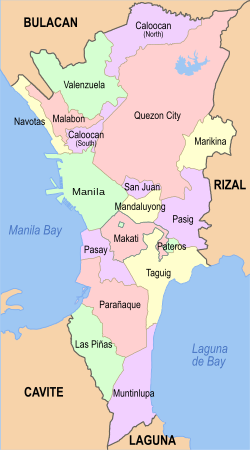 Map of Metro Manila showing the cities and municipalities.

The Metropolitan Manila Development Authority (MMDA; Template:Lang-fil) is an agency of the Republic of the Philippines created embracing the cities of Manila, Quezon City, Caloocan, Pasay, Mandaluyong, Makati, Pasig, Marikina, Muntinlupa, Las Piñas, Parañaque, Valenzuela, Malabon, Taguig, Navotas and San Juan and the municipality of Pateros. Metropolitan Manila, or the National Capital Region, is constituted into a special development and administrative region subject to direct supervision of the Office of the President of the Philippines. The MMDA office is located at Epifanio de los Santos Avenue (EDSA) corner Orense Street, Guadalupe, Makati, Philippines.

The MMDA performs planning, monitoring and coordinative functions, and in the process exercises regulatory and supervisory authority over the delivery of metro-wide services within Metro Manila without diminution of the autonomy of the local government units concerning purely local matters.

The agency is headed by a chairman, who is appointed by, and continues to hold office at the discretion of, the President. The Chairman is vested with the rank, rights, privileges, disqualifications, and prohibitions of a cabinet member.

President Ferdinand Marcos issued Presidential Decree No. 824 creating Metro Manila and its managing public corporation, the Metropolitan Manila Commission (MMC) on November 7, 1975 after the residents of the affected cities and municipalities approved the creation of Metro Manila in a referendum held on February 27, 1975. The move consolidated the Philippine capital Manila and adjacent Quezon City with 2 cities and 12 municipalities of the province of Rizal and 1 municipality of the province of Bulacan into Metro Manila.[1] Marcos appointed his wife, First Lady Imelda Marcos, as governor and Ismael Mathay Jr. as vice governor. The office was located in front of the present-day GMA Network at EDSA corner Timog Avenue, Diliman, Quezon City.Template:Citation needed November 7, thus, is marked as the anniversary of both the region and the government body that supervises it, the MMDA.

The MMC became effectively defunct when on January 9, 1990, President Corazon Aquino issued Executive Order No. 392, in accordance to Article 18, Section 8 of the 1987 Philippine Constitution which replaced the commission with the Metropolitan Manila Authority (MMA).[2] The Metro Manila mayors will choose from themselves as chairman. Jejomar Binay of the municipality of Makati served as its first chairman. The agency transferred to its present office at Guadalupe, Makati. Binay was followed by Ignacio Bunye of municipality of Muntinlupa in 1991, Ismael Mathay Jr. of Quezon City in 1992 then Prospero Oreta of the municipality of Malabon in 1994.Template:Citation needed

Since the elected chairman is one of the mayors of Metro Manila, the role to his constituency gave less attention. Thus, the Congress of the Philippines, composed of the Senate and the House of Representatives, passed Republic Act No. 7924 creating the Metropolitan Manila Development Authority (MMDA) on March 1, 1995. President Fidel V. Ramos appointed Prospero Oreta, who did not run in the Malabon municipal election, as the first Chairman of the MMDA in May 1995 and made him independent of the Metro Manila mayors.Template:Citation needed

In August 2017, the MMDA has adopted the use of a black beret in order to improve its public image.[3] The berets are used by the traffic enforcers under the agency, which alternate these with a black baseball cap.

A meeting of the Metro Manila Council in June 2016.

The governing board and policy making body of the MMDA is the Metro Manila Council, composed of the mayors of the cities and municipalities.

The council is the policy-making body of the MMDA.

To compensate for the closure of these communication mediums, the MMDA turned to social media such as Twitter to broadcast traffic updates to users following them. Live billboards, particularly at EDSA, have been also constructed. The MMDA app for iOS and Android have also been made available for free, broadcasting traffic updates directly.

Template:Further Since 2014, the agency took over the mothballed Pasig River ferry system in anticipation of huge traffic along the metropolis, from the Skyway Stage 3 construction. In reviving the defunct transportation, many of the old ferry stations were reactivated and new vessels purchased. Ridership of the waterway service increased over time, with the offering of discounts to students and senior citizens. The MMDA intends to continue operating the ferry service until a private investor takes over.

Coined by Francis Tolentino, Mabuhay Lanes (formerly called Christmas Lanes, as it was launched during Christmas season of 2014) are roads marked as priority alternative routes that must be cleared of obstruction at all times. This was underscored by strict parking restrictions, where parked vehicles along roads designated as such were towed right away.

Primary and secondary roads, unless with designated parking areas, are considered "No-Parking-Zones".

Starting from Bayani Fernando's term, there has been a large increase in construction of footbridges all over Metro Manila. It has been continued, albeit fewer than before, by succeeding chairmen. It has been hailed due to providing safe passage and crossing for pedestrians in otherwise risky pedestrian lanes.

While already in existence long ago and is not a new concept, it was made popular by Bayani Fernando as a solution to worsening traffic in Metro Manila by closing certain intersections and create U-Turn slots meters away from the former intersection to create continuous traffic, mitigating bottlenecks caused by traffic light signals. This produced mixed results as there were improvements and deterioration in certain areas. During Tolentino's and Carlos' term, some intersections reverted to signalized open intersections only to reimplement U-Turn slots later on.

A short-lived curiosity all around Metro Manila is the pink urinals made popular by Bayani Fernando, which he implemented prominently in Marikina in an effort to curb public urination. They have since been removed, however, with remaining urinal units distributed instead to local government units.

The MMDA operates several pumping stations in strategic areas of Metro Manila, with the aim of mitigating flooding risks, particularly during inclement weather. Old pumping stations that used diesel engines were upgraded in 2015 to use electric motors. Brand new pumping stations were also constructed in flood-prone areas as part of the agency's flood-mitigation program. In addition they also scheduled a regular maintenance of 54 pumping stations across the country with 12 stations being equipped with new pumps.[5]

Starting with Bayani Fernando's tenure, the Estero Blitz (Waterway Blitz) became an annual waterway clearing operation with emphasis on river dredging activities, particularly at flood-prone areas, to reduce the risk and impact of flooding all over the metropolis. The clearing operation is usually conducted during the dry summer season.

Urban renewal, zoning, and land use planning, and shelter services

Template:Main The Gwapotel Inn is a cheap hotel run by the Metropolitan Manila Development Authority.[6] A second Gwapotel was announced in December, 2007.[7]

The Gwapotel along Roxas Boulevard is renamed the MMDA Workers Inn, and operated until 2017. It was closed due to deteriorating structure and will be rehabilitated/transferred at an unspecified date. The Abad Santos Gwapotel has since been converted into their training barracks.

The MMDA are empowered to conduct sidewalk clearing operations in a bid to ease traffic flow and enforcement of sidewalks for people.

The MMDA's sidewalk clearing operations became notorious during Bayani Fernando's tenure for intense clearing activities that became a subject of complaints. These were reduced during the term of Oscar Innocentes and the earlier part of Francis Tolentino's term, but eventually was continued, with the cooperation of the public in submitted reports from SMS, Facebook and Viber.

Aside from the towing team, the SCOG is a prominent group in the MMDA in various operations conducted by a conglomerate of government agencies focused on roadway and vehicle enforcement, the I-ACT.

The Court of Appeals says the MMDA is not among the government agencies deputized to implement RA 9211 or the Tobacco Regulation Act of 2003. The CA added that the MMDA has no police or legislative power to implement the law. It declared invalid MMDA Resolution No. 11-19, which the agency used as basis to implement its anti-smoking campaign.[8]

A first metro-wide earthquake drill was conducted on July 30, 2015 to prepare the public in the event of a magnitude 7.2 earthquake. Various government agencies, educational institutions and the private sector participated in the drill spearheaded by the Metropolitan Manila Development Authority (MMDA). Different scenarios were re-enacted to simulate a destructive earthquake that is expected to happen when the 100-kilometer West Valley Fault moves.[9] Buoyed by its success the MMDA has since hosted annual regional drills for the capital.

In the past, such practices were justified by rhetoric that street children need to be 'rescued' from the street. Advocacy groups contend that in seeking to create a beautiful metropolis, the MMDA often treat Metro Manila's urban poor like 'rubbish' on the street.[10]

A report from PREDA that was funded by UNICEF, claims inhumane proceedings to caught vagrants.[11]