It is located on the south-eastern side of Mindanao.

Mati is politically subdivided into 26 barangays. In 1957, the barrio then known as Cabuaya was renamed to Dawan.[2]

Mati comes from the Mandayan word Maa-ti which refers to the town's creek that easily dries up even after heavy rain. Pioneer settlers were tribes Kalagan, Mandayan, and Maranao which carried strong Arabic and Indo-Malayan influences.

Captain Prudencio Garcia, the pioneer political-military head in 1861, and his comrade Juan Nazareno founded Mati and two other towns in Davao Oriental.

By 1903, Mati was declared a municipality by virtue of Act No. 21. By 1907, Act No. 189 further reaffirmed the establishment of its local government. Francisco Rojas was the first appointed mayor while the first elected mayor was Patricio Cunanan in 1923. Mati became the capital of Davao Oriental in 1967.Template:Citation needed 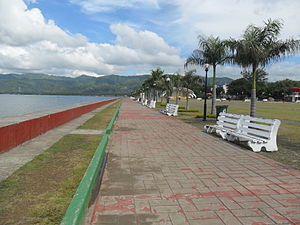 The Baywalk of Mati

On June 20, 2007, the Commission on Elections officially proclaimed the ratification of Republic Act 9408 converting the Municipality of Mati into a component city.

Mati is the fifth largest city/municipality in Davao Region, after Davao City, Tagum, Panabo, and Digos.[4]

Cebuano is the most widely spoken language and the corresponding ethnicity (which includes the Boholano subgroup) accounts for 71.55% of the total household population according to a 2000 census. Mandaya ranks second with 12.74%, followed by Kalagan with 6.87%. Most residents of Mati are descendants of migrants from the Visayas who came for employment opportunities in logging, mining, farming, fishing, trading and teaching.[5]

Roman Catholicism is the major religious group, comprising the 80% of the total population. Islam comes in second with 8 percent, Iglesia Ni Cristo comes in third comprising with 6 percent. A small number of believers of other Christian groups like the United Church of Christ and Seventh Day Adventist are in the city as well.[5]

The Cathedral of San Nicolas de Tolentino is the center of Diocese of Mati under the jurisdiction of Roman Catholic Archdiocese of Davao. Two parishes are in Mati: one in the town center and one in Barangay Dawan.[6]

This region is linked to the markets of Mindanao, Malaysia and Indonesia. Most of the local people rely on agriculture and agro-industries for a living. Exports include bananas, pineapples, coconuts and fish. Because of its tropical nature and beaches, tourism is a rapidly growing business. Mining is also a contributor to the city's economy, due to the large deposits of copper in the city outskirts.[7]

Mati is served by the Davao Oriental Electric Cooperative for its power needs. The Mati City Water District, on the other hand, is the local water provider for the city.

Mati offers beautiful landscapes and a number of beautiful resorts. The Provincial Capitol building and park rises atop the hill commanding a fantastic view of the Pujada Bay. Other locations that offer a bird's-eye view of the city are the Mati Tourism Complex and Badas Viewdeck.

Mati has always been known as a beach destination, with foreigners flocking to the city to enjoy what its beaches have to offer. Dahican is one of the most popular destinations in Mati with its 2-kilometer pure, fine white sand shore. It has recently become a prime destination for surfers and skimboarders. Pujada Bay boasts thousands of species of sea life and has been considered as among the richest bays in Southeast Asia. As such, locals take measures to preserve the diversity of marine life, protecting animals like lobsters, sea cows (locally known as Dugong), bottlenose dolphins, hammerhead sharks, manta rays and different kinds of turtles.

Recently, skimboarding, surfing, and frisbee sports have established a wide fandom among young locals with Dahican being the favorite hub for tournaments in the region.

The Mindanao SAGA Flying Club (MSFC), located at the Mati National Airport in Barangay Dahican, is an Ultralight aircraft flying facility that offers trial flights and flying lessons. Fast becoming the major attraction in Mati, MSFC has introduced a safe, affordable, and an exciting way to see the majestic scenery of the city like no one has seen before. The Quicksilver Sport 2S ultralight is the favorite of visitors owing to its open cockpit that gives the passenger an unrestricted view of the landscape and the feeling of ultimate freedom in the air.

One of the attraction in Mati Park and Baywalk.

Inaugurated in January 2014, Subangan is the provincial museum. It features interactive, state-of-the-art exhibits. The centerpiece is a 53-feet skeleton of a sperm whale, considered the largest on display in the whole country. The museum also features exhibits on UNESCO World Heritage Site Mount Hamiguitan and Davao Oriental's history.[8]

Mati celebrates two annual grand festivals: the Pujada Bay Festival every June, and the Sambuokan Festival every October. Compared to the Kadayawan of Davao and other festivals, both of Mati's are relatively new. The Pujada Bay Festival started in 2004 to promote and protect the Pujada Bay, while the Sambuokan Festival started in 2001 to unite Matinians during the commemoration of the municipality's founding anniversary every October 29. In years, both festivals have become alternative tourist destinations as competitors from various regions in the country start pouring in for competitions like streetdancing, boat racing, skimboarding, and frisbee.

In basic education, seven private schools, sixteen public high schools, and a number of public elementary schools are located in the city.[9] The City Schools Division of Mati supervises these schools.

The pedicab or tricycle is the major means of transportation around the city. In recent years, underbone motorcycles have earned quite a popularity among professionals and students, thus easily becoming a public transport alternative to commuters who prefer more speed. Jeepneys are available for travels from Mati to its neighboring towns while vans and buses are still the only means of transportation from Mati to other cities.

There is also a seaport in Mati. The Mati Seaport in Pujada Bay is one of only three seaports in the whole province of Davao Oriental.