in Bacolod, Philippines. The most recent festival was held from 8 to 27 October 2019. The festival sites include the Bacolod Public Plaza, the Lacson Tourism Strip, and the Bacolod Government Center.

The word "Masskara" is a portmanteau, coined by the late artist Ely Santiago from mass (a multitude of people) and the Spanish word cara (face), thus forming MassKara (a multitude of faces). The word is also a pun on maskara, Filipino for "mask" (itself from Spanish máscara), since it is a prominent feature of the festival and is always adorned with a smiling face, giving rise to Bacolod being called the "City of Smiles."

The Festival first began in 1980 during a period of crisis. The province relied on sugar cane as its primary agricultural crop and the price of sugar was at an all-time low due to the introduction of sugar substitutes like high fructose corn syrup in the United States.

The first Masskara Festival was also a time of tragedy. On 22 April 1980, the inter-island vessel MV Don Juan carrying many Negrenses, including those belonging to prominent families in Bacolod City, collided with the tanker Tacloban City and sank in Tablas Strait off Mindoro while en route from Manila to Bacolod, which resulted in 18 lives lost and 115 missing.

In the midst of these events, the local government then headed by the late Mayor Jose "Digoy" Montalvo appropriated a seed fund and enjoined the city's artistic community, civic, and business groups to hold a "festival of smiles", to live up to the City's moniker as the "City of Smiles." They reasoned that a festival was also a good opportunity to pull the residents out of the pervasive gloomy atmosphere brought by the Don Juan Tragedy.[3] The initial festival was held during the City's Charter Day celebration on 19 October 1980 and was steered by an organizing committee created by the city hall which was headed by the late councilor Romeo Geocadin and then city tourism officer Evelio Leonardia. It was a declaration by the people of the city that no matter how tough and bad the times were, Bacolod City was going to pull through, survive, and in the end, triumph.

The festival has evolved into one of the major annual tourism attractions of the Philippines over the next four decades. Held in typical Oktoberfest and Mardi Gras fashion, the MassKara Festival served as a catalyst for far-reaching growth and development of the city's tourism, hospitality, culinary, crafts and souvenirs, and services sectors. In later years, the Electric Masskara was added as another attraction of the Festival. For several nights leading to the highlight weekend, tribes of MassKara dancers garbed in colorful neon and LED lights on illuminated floats make their way up and down the Lacson Strip, a one kilometer stretch of merrymaking dotted with band stages, souvenir stands, exotic car displays, and roadside bars and food set-ups put out by restaurant and hotels along the strip. It is said that beer consumption during the festival is so high that at one time during the first few stagings of the festival, it bled dry the Mandaue brewery of San Miguel Corporation on nearby Cebu island. The company eventually built its Bacolod brewery to serve the city and Negros Island.

The celebration in 2019 marked the 40th celebration of the festival, aptly called Ruby Masskara.[4]

The mask motif of the festival has changed from masks influenced by native Filipinos to those influenced by the Carnival of Venice and the Rio Carnival. Earlier masks were hand-painted and adorned with feathers, flowers, and native beads, while contemporary masks feature plastic beads and sequins. 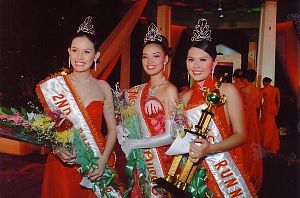 Winners of the MassKara Queen pageant in 2005

The festival features a street dance competition where people from all walks of life troop to the streets to see masked dancers gyrating to the rhythm of Latin musical beats in a display of mastery, gaiety, coordination and stamina. Major activities include the MassKara Queen beauty pageant, carnivals, drum, bugle corps competitions, food festivals, sports events, musical concerts, agriculture-trade fairs, garden shows, and other special events organized every year. 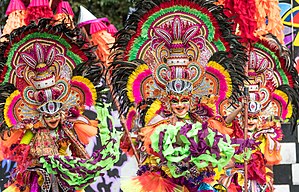 Electric MassKara is a parade with music, lights, and floats.