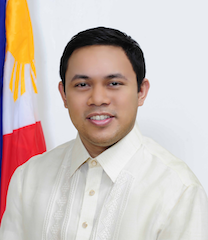 Mark Aguilar Villar (born 14 August 1978) is a businessman and government official. He is currently the secretary of the Department of Public Works and Highways (DPWH) under the administration of President Rodrigo Duterte. He is a former representative of Las Piñas in the House of Representatives.[1][2]

On 4 October 2021, Villar announced his resignation from his post as secretary of the DPWH. On 8 October, he filed his certificate of candidacy for the 2022 senatorial election.[3] He is running under the Nacionalista Party, of which his father is the president. He is part of the senatorial slate of the Partido Demokratiko Pilipino-Lakas ng Bayan (PDP-Laban).

Mark Villar was born on 14 August 1987. His parents are businesspersons and politicians Manny Villar and Cynthia Villar. He has an older brother, Manuel Paolo Villar, and a younger sister, Camille Lydia Villar, who is currently the representative of Las Piñas in the House of Representatives. Villar attended the International School Manila in Makati, Metro Manila. He earned a bachelor’s degree in economics, political science and philosophy from the Wharton School of the University of Pennsylvania and a master’s degree in business administration from the University of Chicago Booth School of Business.[1]

Upon finishing his studies abroad, Villar worked in his family’s real estate businesses in the Philippines for 10 years. He first served as the president of Crown Asia Corporation and then became the managing director of Vista Land & Lifescapes.[4]

Villar entered politics in 2010, when he was elected congressman of the lone district of Las Piñas. He succeeded his mother, Cynthia Villar, in the position; she was a representative for three consecutive terms and was then elected senator. In the House of Representatives, Mark Villar was the chairman of the house committee on trade and industry and vice chairman of the house committees on overseas workers’ affairs, labor and employment, and science and technology.[1]

Villar authored bills on livelihood, health and education. He successfully ran for a third term in 2016. However, president-elect Rodrigo Duterte offered him the post of secretary of the Department of Public Works and Highways on 17 May 2016. He resigned from his position as representative of Las Piñas and joined Duterte’s cabinet on 1 August 2016. A special election was supposed to be held to elect his replacement in the House of Representatives.[5] However, it never took place and the position remained vacant until the end of the 17th Congress. Villar’s sister, Camille Villar, was elected to the position in 2019.

Villar is married to Emmeline Yan Aglipay, a lawyer and former representative of the DIWA party-list. She is currently an undersecretary of the Department of Justice.[6]