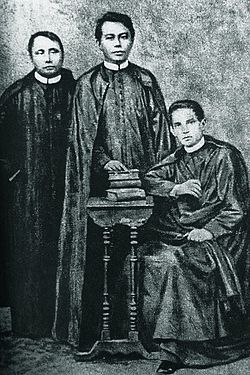 Fr. Gomes as the central figure, with him were Fr. Zamora on the left, and Fr. Burgos on the right.

Mariano Gómes de los Ángeles (Spanish: [ˈmaˈɾjano ˈɣomes]), often referred to by his original birth name Mariano Gómez de los Ángeles, (b. August 2, 1799 – d. February 17, 1872) was a Filipino priest and martyr, and an advocate of the secularization movement in the Philippines.

Mariano was born in Sta. Cruz, Manila from a wealthy Filipino-Chinese family. He was first tutored by his father before his primary education at the San Jose College. At the age of 16, he earned a degree in philosophy then studied law at the University of Sto. Tomas. His parents were surprised by his sudden to be a priest. Eventually, he obtained his degree in theology with high honors.

Life as a clergyman

Gomes officiated his first mass on May 28, 1824 and was appointed parish priest of Bacood, Cavite. As a Filipino priest, he was among those who believed that parishes should be secularized. He became instrumental in the surrender of Luis Parang to Spanish authorities.

Mariano founded the newspaper, La Verdad that exposed the abuses of the Spanish government and religious institutions. He also helped finance the Madrid publication of compatriot Fr. Jose Burgos defending the Filipino clergy.

Because of his principles and high regards to parishioners, Gomes was defended by the people of Bacood when he was about to be arrested by the Spaniards as a result of his implication in the Cavite Mutiny on January 20, 1872. Together with Burgos and Zamora, he was falsely accused of participating in the said mutiny.

Gomes, Burgos and Zamora (collectively known the Gomburza) was executed by means of garrote (strangulation) on February 17, 1872 at Bagumbayan (Luneta Park)

Fr. Mariano Gomes never signed his name with the Spanish letter “z” but with the Tagalog “s” as an act of resistance to Spaniards.