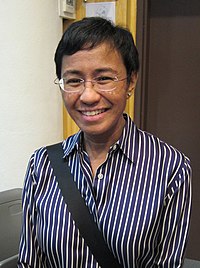 Maria Ressa at the launching of Ambition, Destiny, Victory: Stories from a Presidential Election in 2011.

To read this article in Filipino, see Maria Ressa

Maria Angelita Ressa (born October 2, 1963) is a Filipino-American journalist and author, the co-founder and CEO of Rappler, and the first Filipino (individually) to win a Nobel Peace Prize. She previously spent nearly two decades working as a lead investigative reporter in Southeast Asia for CNN.

Ressa was included in Time Magazine's "Person of the Year 2018" as one of a collection of journalists from around the world combating fake news. She is one of the 25 leading figures on the Information and Democracy Commission launched by Reporters Without Borders.

An outspoken critic of President Rodrigo Duterte, Ressa was convicted of cyberlibel under the controversial Philippine Anti-Cybercrime law for publishing a story concerning businessman Wilfredo Keng, who is believed to have ties with the president. The move was condemned by human rights groups and journalists as an attack on press freedom and a politically motivated act by Duterte's government.

Ressa was born in Manila in 1963 when her mother was 18 years old. Ressa's father died when she was one. Her mother then moved to the United States of America, leaving her daughter and her sister with their father's family, and would visit her children frequently. Subsequently, her mother married an Italian-American man and went back to the Philippines and took both her children to the United States when Ressa was ten years old. Ressa was adopted by her stepfather and took his last name. Her parents relocated to Toms River, New Jersey where she went to Toms River High School North, a public school nearby. 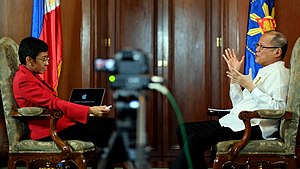 Ressa conducts an interview with former Philippine President Benigno Aquino III at the Music Room of the Malacañang Palace, June 7, 2016

Ressa's first job was at government station PTV 4. She then co-founded independent production company Probe in 1987, and simultaneously served as CNN's bureau chief in Manila until 1995. She then ran CNN's Jakarta bureau from 1995 to 2005. As CNN's lead investigative reporter in Asia, she specialized in investigating terrorist networks. She became an author-in-residence at the International Center for Political Violence and Terrorism Research (ICPVTR) of Nanyang Technological University's S. Rajaratnam School of International Studies in Singapore.

From 2004, Ressa headed the news division of ABS-CBN, while also writing for CNN and The Wall Street Journal. In September 2010, she wrote a piece for The Wall Street Journal criticising the then president Beningno Aquino III handling of the bus hostage crisis. This piece was published two weeks before the president's official visit to the United States of America. Speculations were rife this among other reasons finally led to Ressa leaving the company in 2010, after deciding not to renew her contract.

She is the author of two books concerning the rise of terrorism in Southeast Asia—Seeds of Terror: An Eyewitness Account of Al-Qaeda's Newest Center (2003) and From Bin Laden to Facebook: 10 Days of Abduction, 10 Years of Terrorism (2013).

Ressa has also taught courses in politics and the press in Southeast Asia for Princeton University, and broadcast journalism for the University of the Philippines Diliman.

Ressa established the online news site Rappler in 2012 along with three other female founders and with a small team of 12 journalists and developers. It initially started as a Facebook page named MovePH in August 2011, evolving into a complete website on January 1, 2012. The site became one of the first multimedia news websites in the Philippines and a major news portal in the Philippines, receiving numerous local and international awards. It currently is the fourth largest website in the country employing about 100 journalists. She serves as the Executive Editor and Chief Executive Officer of the news website.

On 25 September 2020, Ressa was named as one of the 25 members of the "Real Facebook Oversight Board", an independent monitoring group over Facebook.

Ressa first interviewed Rodrigo Duterte the 16th president of Philippines in the 1980s when he was a mayor of Davao. She again interviewed him in 2015 during his presidential election campaign where he confessed to killing three people when he was a mayor. Under her leadership, Rappler has been consistently critical of Duterte's policies, especially his policies on the war on drugs with their stories demonstrating that the abuses were being carried out by the police with Duterte's approval. The website under her stewardship also wrote about the alleged pro-Duterte online "troll army" which according to their article, were pushing out fake news stories and manipulating the narrative around his presidency.

In July 2017, in his State of Union speech, Duterte declared Rappler to be "fully owned" by the Americans and hence in violation of the constitution. He also said, "Not only is Rappler's news fake, it being Filipino is also fake." Subsequently, in August 2017, the Philippine securities and exchange commission (SEC) initiated an investigation against Rappler and demanded to check its documents. In January 2018, it revoked Rappler's license to do business. The case went to the court of appeals, where it was remanded back to the SEC for having no basis. Duterte told a Rappler reporter in 2018: "If you are trying to throw garbage at us, then the least that we can do is explain – how about you? Are you also clean?" The government under his leadership revoked the site's operating license.

On January 22, 2018, Ressa appeared before the Philippines' National Bureau of Investigation (NBI), to comply with a subpoena over an online libel complaint under the Cybercrime Prevention Act of 2012, which the administration of Rodrigo Duterte has wielded to punish criticism of the President and his allies. The subpoena was issued on January 10 to Ressa, together with former Rappler reporter Reynaldo Santos, and businessman Benjamin Bitanga. The subpoena was filed in October 2017 by a Filipino–Chinese national, Wilfredo Keng, after Rappler published a story on Keng's alleged lending of his sports utility vehicle to now-deceased Chief Justice Renato Corona as a bribed form of favor. Though the article was written in 2012 before the act criminalizing cyberlibel was signed into law by Benigno Aquino III, the Department of Justice considered it republished after a typographical error was corrected in 2014. In 2019, prominent international human rights lawyers Amal Clooney, Caoilfhionn Gallagher, and Can Yeginsu joined the legal team (consisting of international and Filipino lawyers) defending Ressa.

In November 2018, the Philippine government announced that it would charge Ressa and Rappler's parent company, Rappler Holdings Corporation, with tax evasion and failure to file tax returns. The charge concerns the investment in Rappler by the Omidyar Network in 2015. Ressa has denied wrongdoing, originally stating that the foreign money was "donated" to its managers, later stating the investments were in the form of securities. Rappler issued a statement denying any wrongdoing. The Philippines' Bureau of Internal Revenue, after a study of Ressa's explanation, ruled that Rappler's issuance of securities-generated capital gains was taxable. It concluded that Rappler evaded payment amounting to ₱133 million in taxes.

On February 13, 2019, Philippine judge Rainelda Estacio-Montesa of the Manila Regional Trial Court Branch #46 issued the arrest warrant for "cyber libel" against Ressa for an article published on Rappler. The officials of the Philippines National Bureau of Investigation fulfilled this warrant filed under the charge of cyber libel. The "cyber libel" law was passed after the article was originally published, so the charge was based on the technicality that fixing a typo might be considered "republishing". The arrest was live-streamed by many of Rappler's senior reporters on Facebook.

Due to time constraints, Ressa was unable to post bail amounting to ₱60,000 ($1,150) resulting in her arrest and confinement within the (holding) board room office of the NBI building. A total of six lawyers, two pro bono, were assigned to work on her case.On February 14, 2019, at the executor proceeding of Manila city Judge Maria Teresa Abadilla, Ressa gained freedom by posting bail at ₱100,000 ($1,900).

Ressa's arrest was criticized by the international community. As Ressa is an outspoken critic of President Rodrigo Duterte, many viewed the arrest as being politically motivated. In contrast, the official spokesperson for the Malacañang Palace denied any government involvement in the arrest, asserting that the lawsuit against Ressa was set forth by a private individual, the plaintiff Wilfredo Keng.

Madeleine Albright, a former U.S. Secretary of State, issued an opinion stating that the arrest "must be condemned by all democratic nations". Similarly, the National Union of Journalists of the Philippines called it "a shameless act of persecution by a bully government".

The National Press Club, an organization accused of having close ties to the Duterte regime and with a long history of criticising the Rappler organization, has stated that the arrest was not harassment, and that Ressa should not be relegated to "the altar of press freedom for martyrdom". It also warned against politicizing the issue.

Ressa's trial on charges of cyberlibel began in July 2019. In a statement she made on the first day of her trial, Ressa said: "This case of cyberlibel stretches the rule of law until it breaks."

Ressa was found guilty on June 15, 2020. In her ruling, Judge Rainelda Estacio-Montesa argued that Rappler "did not offer a scintilla of proof that they verified the imputations of various crimes in the disputed article... They just simply published them as news in their online publication in reckless disregard of whether they are false or not." Judge Rainelda Estacio-Montesa also quoted Nelson Mandela, saying, "To be free is not merely to cast off one's chains but to live in a way that respects and enhances the freedom of others." Sheila Coronel, director of the Stabile Center for Investigative Journalism at Columbia University, argued that the conviction is representative of "how democracy dies in the 21st century.">

Ressa faces between six months and six years in prison and a fine of ₱400,000 ($8,000). Ressa warned that her conviction could augur the end of freedom of the press in the Philippines. Presidential Spokesperson Harry Roque asked the media to "respect the decision" and affirmed the commitment of President Rodrigo Duterte to free speech, while opposition leader Leni Robredo described it as a "chilling development" and the National Union of Journalists of the Philippines said it "basically kills freedom of speech and of the press. Internationally the ruling has been criticized by Human Rights Watch, Amnesty International and Reporters Without Borders. In its statement condemning the release, Reporters Without Borders termed the legal proceedings against Ressa "Kafkaesque".

Maria Ressa, together with Russian journalist Dmitry Muratov, received the 2021 Nobel Peace Prize "for their efforts to safeguard freedom of expression, which is a precondition for democracy and lasting peace." They were selected out of 329 candidates. The Norwegian News Agency reported earlier in 2021 that Ressa had been nominated by Jonas Gahr Støre, the designated Prime Minister following the 2021 election.