The Maranao people (Maranao: ['mәranaw]; Filipino: Maranaw[1]), also spelled Meranao, Maranaw, and Mëranaw, is the term used by the Philippine government to refer to the southern indigenous people who are the "people of the lake", a predominantly-Muslim Lanao province region of the Philippine island of Mindanao. They are known for their artwork, weaving, wood, plastic and metal crafts and epic literature, the Darangen. They are ethnically and culturally closely related to the Iranun, and Maguindanao, all three groups being denoted as speaking Danao languages and giving name to the island of Mindanao.

A satellite image of Lake Lanao.

The name "Maranao" (also spelled "Meranao", "Meranaw", or "Maranaw") means "people of the lake" (lanaw or ranaw, archaic danaw, means "lake" in the Maranao language). This is in reference to Lake Lanao, the ancestral homelands of the Maranao people.[2]

The original endonym of the ancestral Maranao is believed to be "Iranaoan".[3][4] This group later diverged, resulting in the modern Maguindanao and the Iranun people (whose names can also be translated to "people of the lake"),[5] while the ancestral Iranaoan who stayed in Lake Lanao became known as the Maranao. These three ethnic groups are still related to each other, share similar cultures and speak languages belonging to the Danao language family.[3][4] 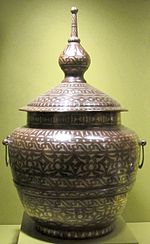 A food jar (gadur) made of brass with silver inlay.

Maranao culture can be characterized by:

The culture of the Maranaos is centered on Lake Lanao, the largest in Mindanao, and the second-largest and deepest lake in the Philippines. This lake is the subject of various myths and legends. It supports a major fishery, and powers the hydroelectric plant installed on it; the Agus River system generates 70% of the electricity used by the people of Mindanao. A commanding view of the lake is offered by Marawi City, the provincial capital.

Maranao is an Austronesian language spoken by the Maranao people in the provinces of Lanao del Norte and Lanao del Sur.[7] Because of the mass influx of Cebuano migrants to Mindanao, many Maranaos are also fluent in Cebuano.

Arabic, a Central Semitic language, is spoken by a minority of the Moro people, as it is the liturgical language of Islam. Most Maranaos, however, do not know Arabic beyond its religious use.

Sarimanok, Papanoka "Mra" or "Mara patik" is a legendary bird of the Maranao that is a ubiquitous symbol of their art. It is depicted as a Hoodhud (Arabic) with colorful wings and feathered tail, holding a fish on its beak or talons. The head of Sarimanok is like the head of a Hoopoe (Balalatoc in maranaw) and is profusely decorated with scroll, leaf and spiral motifs (okir). It is a symbol of good fortune.[8][9]

The Maranao have also developed their own adaptation of the Ramayana epic, the Maharadia Lawana. They also have a traditional dance, the Singkil, which was based on another local Ramayana adaptation, the Darangen.

A Kulintang ensemble at the National Museum of Ethnology in Osaka.

Maranao kulintang music is a type of a gong music. Sarunaayfis also found among both Muslim and non-Muslim groups of the Southern Philippines. Kobbing is a Maranao instrument and Biyula is another popular Instrument. Biyula is a string instrument. In 2005, the Darangen Epic of the Maranao people of Lake Lanao was selected by UNESCO as a Masterpiece of the Oral and Intangible Heritage of Humanity.

Maranao cuisine is quite spicy, with spices mixed up. Traditionally cultivated spices, locally known as palapa (Bontang, native product in Gandamatu) are a common condiment.[10] It is made of stewed scallion bulbs or “sakurab” in Maranao. Thinly sliced scallion bulbs and ginger are caramelized by slow cooking and mixed with chilies and coconut oil.[11]

Dishes are intertwined with important cultural rituals across all aspects of Maranao culture: from birth to death.![12]

Traditionally, the Maranao society is divided into two strata. Namely, Mapiyatao (Pure) and Kasilidan (Mixed blood). Kasilidan is further subdivided into categories which are as follows; Sarowang (Non-Maranao), Balbal (Beast), Dagamot (Sorcerer/Sorceress) and Bisaya (Slave). The Mapiyatao are those natives who are entitled to ascend to thrones and has a pure royal bloodline. On the other hand, the Kasilidan are those natives who are suspected of mixed bloodline. However, due to the changes brought by time, these social strata are beginning to decline due to the rise of wealth of each and every Maranao families. 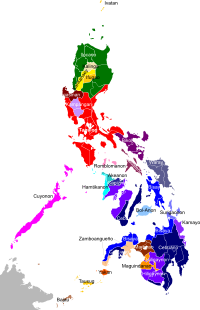 The Maranao people are shown in chocolate brown in this map.

Maranaos number 1,354,542 in 2010, representing 1.47% of the population.[13] Along with the Iranun and Maguindanao, the Maranao are one of three, related, indigenous groups native to Mindanao. These groups share genes, linguistic and cultural ties to non-Muslim Lumad groups such as the Tiruray or Subanon. Maranao royals have varied infusions of Arab, Indian, Malay, and Chinese ancestry.

As with other Indigenous and Mindanao Lumads, during the nominal occupation of the Philippines by the Spanish, and later the American and the Japanese, the Maranaos had tribal leaders whom they called Datu. In the 14th century, upon the arrival of Islam, they developed into a kingdom with a Sultan due to the influence of Muslim missionaries.