Citizens of Manila run for safety from suburbs burned by Japanese soldiers, 10 February 1945 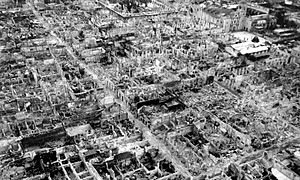 Destruction of the Walled City (Intramuros), 1945

The Manila massacre (Filipino: Pagpatay sa Maynila or Masaker sa Maynila), also called the Rape of Manila (Filipino: Paggahasa sa Maynila), involved atrocities committed against Filipino civilians in the City of Manila, the capital of the Philippines, by Japanese troops during the Battle of Manila (3 February 1945 – 3 March 1945) which occurred during World War II. The total number of civilians who were killed was at least 100,000.

The Manila massacre was one of several major war crimes committed by the Imperial Japanese Army, as judged by the postwar military tribunal. The Japanese commanding general, Tomoyuki Yamashita, and his chief of staff Akira Mutō, were held responsible for the massacre and other war crimes in a trial which started in October 1945. Yamashita was executed on 23 February 1946 and Mutō on 23 December 1948, despite extensive evidence showing he neither knew nor approved such killings.

Before the battle, deciding that he would be unable to defend Manila with the forces available to him, and to preserve as large a force as possible in the rural mountain Luzon region of the Philippines, General Tomoyuki Yamashita had insisted on a complete withdrawal of Japanese troops from Manila in January 1945. However, Yamashita's order was ignored by about 10,000 Japanese marines under Rear Admiral Sanji Iwabuchi who chose to remain in Manila. About 4,000 Japanese army personnel were unable to leave the city due to the advance of the American and Filipino forces.

In the Battle of Manila from February to March 1945, the United States Army advanced into the city of Manila in order to drive the Japanese out. During lulls in the battle for control of the city, Japanese troops took their anger and frustration out on the civilians in the city. Violent mutilations, rapes, and massacres occurred in schools, hospitals and convents, including San Juan de Dios Hospital, Santa Rosa College, Santo Domingo Church, Manila Cathedral, Paco Church, St. Paul's Convent, and St. Vincent de Paul Church.[1]

Dr Antonio Gisbert told of the murder of his father and brother at the Palacio del Gobernador, saying, "I am one of those few survivors, not more than 50 in all out of more than 3000 men herded into Fort Santiago and, two days later, massacred.[1]

The Japanese forced Filipino women and children to be used as human shields into the front lines to protect Japanese positions. Those who survived were then murdered by the Japanese.[2]

The Japanese conducted mop-up operations to clear north Manila of guerrillas, executing more than 54,000 Filipinos, including children, as they passed through towns.[3]

Pregnant Filipino women were killed by having their bellies ripped open while the Japanese executed Filipino civilians trying to flee.[3]

The Bayview Hotel was used as a designated "rape center".[4] According to testimony at the Yamashita war crimes trial, 400 women and girls were rounded up from Manila's wealthy Ermita district, and submitted to a selection board that picked out the 25 women who were considered most beautiful. These women and girls, many of them 12 to 14 years old, were then taken to the hotel, where Japanese enlisted men and officers took turns raping them.[5]

Despite many allied Germans held refuge in a German club, Japanese soldiers entered in and bayoneted infants and children of mothers pleading mercy and raped women seeking refuge. At least 20 Japanese soldiers raped a young girl before slicing her breasts off after which a Japanese soldier placed her mutilated breasts on his chest to mimic a woman while the other Japanese soldiers laughed. The Japanese then doused the young girl and two other women who were raped to death in gasoline and set them all on fire.[6]

The Japanese went on setting the entire club on fire killing many of its inhabitants. Women who were escaping out the building from the fire were caught and raped by the Japanese. 28-year-old Julia Lopez had her breasts sliced off, was raped by Japanese soldiers and had her hair set on fire. Another woman was partially decapitated after attempting to defend herself and raped by a Japanese soldier.[7]

The combined death toll of civilians for the battle of Manila was about 100,000, most of which was attributed to massacres by Japanese forces. Some historians, citing a higher civilian casualty rate for the entire battle, suggest that 100,000 to 500,000 died as a result of the Manila massacre on its own, exclusive of other causes.[1][8][9][10][11][12][13]

General Yamashita's role in the massacre

Even though it was Admiral Iwabuchi whose marines committed the atrocities, and even though General Yamashita had earlier ordered him to evacuate Manila as he had, it was Yamashita who was convicted as a war criminal for the Manila massacre. Former war-crimes prosecutor and author Allan Ryan argues that there was no evidence that Yamashita committed crimes there, ordered others to do so, was in a position to prevent them, or even suspected they were about to happen. General MacArthur, five other generals, and the Supreme Court of the United States ultimately held Yamashita responsible simply because he was in command of all Japanese troops in the Philippines at the time.[14] A group of American military lawyers attempted to defend General Yamashita by appealing to the U.S. Supreme Court, but the appeal failed, 5 votes to 2. As a result, Yamashita was sentenced to death by hanging. He was hanged on 23 February 1946 in Manila.[15] The two dissenting Supreme Court Justices called the entire trial a miscarriage of justice, an exercise in vengeance, and a denial of human rights.[14]