The City of Manila should be the first in the list of priority destinations of any tourist of the Philippines. Just like any world capital, it has the amenities of urban living, but made more interesting by its rich heritage and eccentric east-meets-west culture.

It's easy enough to tour, as the more compelling places are concentrated around Manila Bay. You can travel around Intramuros, Chinatown, Rizal Park, and Malate in a day, all without spending more than a thousand pesos. But first you have to secure decent accommodations, preferably in one of the hotels at Ermita, which is accessible to all the major tourist destinations in Manila (See our Manila Hotel Guide). After this, you're all set.

Wake up early, have your nice hotel breakfast, call a cab, then direct the cabbie to drop you off at Intramuros' Plaza de Roma. Three major structures front the plaza: the Manila Cathedral, the Ayuntamiento, and the Palacio del Gobernador, a modern structure that houses the Intramuros Administration.

The Manila Cathedral is the first parochial church of Manila, though the present structure is the church's sixth incarnation, the last five having been destroyed by earthquakes and battle. The Cathedral serves as a venue for significant religious events, such as the Exhibit of the Shroud of Turin, among others.

To the right of the Cathedral is the Ayuntamiento, once the grandest building in the entire Intramuros district. Boasting of marble halls, wood-paneled rooms and lavish furnishings, it housed several government institutions, the mayor's residence, and even a prison. It also witnessed the transfer of colonial power, and was used as the office of the American military general until the change to civil rule in 1903. The building however was ruined during Manila's carpet bombing in 1945, and its restoration is one of the principal projects of the Intramuros Administration.

Now if you walk further along General Luna street, you will see the San Agustin Church and Museum. Built in 1587, the San Agustin is the oldest church in the Philippines, yet still in demand for weddings and other ceremonies. Though the facade looks simple and devoid of intricacies, the church's pride lies on its interiors, which features intricate trompe l'oeil frescoes on the ceiling, the pineapple-inspired yet baroque pulpit, and the classic Parisian chandeliers.

The San Agustin Museum, located in the church's adjacent monastery, is an exhibit of old Manila's antiquities. It boasts of the fact that most of Intramuros was destroyed during World War II – except the San Agustin – thus it remained to be the only repository of Manila's treasures.

Another good place to visit is the Bahay Tsinoy, located on the corner of Anda and Cabildo streets. The Bahay Tsinoy is a unique museum featuring dioramas and photographs which detail the role of Chinese in the growth of Manila.

Then cap your Intramuros journey with a walk over its walls. Most of the gates, walls, and bulwarks are accessible to anyone, and provide one with a view of Manila mostly unseen, even by its citizens.

You may stay in Intramuros and have your lunch at one of the posh Spanish-themed restaurants inside the walls. However we suggest that you troop to Chinatown and have a hearty lunch at one of the place's great restaurants. After all, it only takes a ten-minute cab ride from Intramuros to Binondo (This time tell the driver to take you to Ongpin). On the way you will see the Goodwill Arch, erected to commemorate Filipino-Chinese friendship. Once inside Ongpin Street you will see a lot of good places to dine in. Just tell the driver to let you off once you see a restaurant you think is worth exploring.

After a satisfying meal, explore a bit of Chinatown, which is the oldest Chinese settlement in the world. There are herbal shops, goldsmiths, teahouses, bakeries, pawnshops – everything that any Chinese enclave in the world has, and more. Make sure you have enough time, though, as exploring the place, with its little streets and alleys, may take hours. (You may want to contact Ivan Man Dy, a Tsinoy tour guide, if you want a comprehensive tour of Chinatown.) 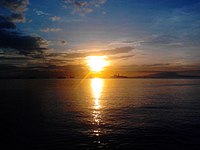 After traversing the entirety of Chinatown, hunger may again strike, and we suggest that while satisfying your craving, you still do a bit of exploring. Hail a cab in front of Santa Cruz Church (a church built for the Chinese Christian converts), and direct the driver to take you to Remedios Circle in Malate. On the way you'll get a glimpse of the beautiful Manila Post Office immediately after crossing the Pasig River, and a few meters on you'll see the Manila City Hall, the majestic city office standing in Liwasang Bonifacio. And if you can instruct your cabbie to drive by Roxas Boulevard through Burgos Street try to do so, in order to get a glimpse of the Rizal Monument, the national hero's memorial situated on Rizal Park. Malate should not be far from there, and once in Remedios Circle you'll find yourself looking at an array of restaurants. The only hard part will be choosing where to dine (Check out our Manila Restaurant Guide).

After your meal you may want to let your hair down and try one of the area's clubs and bars. These spots are already tourist-friendly, so you will feel just fine mingling with the local clubbers (and bouncers). But if you still are in the mood for a bit of sightseeing just walk a short distance to Malate Church, now fronted by a magnificent fountain. Lastly, cross Roxas Boulevard and get cozy with a nighttime view of Manila Bay. Then call it a day and rest well.