The Manila Peninsula siege occurred on November 29, 2007, at The Peninsula Manila hotel in Makati, Philippines. Senator Antonio Trillanes IV, Brigadier General Danilo Lim, and 25 other Magdalo (mutineers) officers walked out of their trial and marched through the streets of Makati. The mutineers called for the ousting of President Gloria Macapagal-Arroyo, and seized the Rizal function room on the second floor of the Manila Peninsula Hotel along Ayala Avenue. Former Vice-President Teofisto Guingona, Jr. as well as some of the soldiers from the Armed Forces of the Philippines joined the march to the hotel.

After several hours, Trillanes and Lim surrendered to government forces after a military armored personnel carrier barged into the glass door of the hotel lobby and the hotel walls and windows sustained weapons damage. Trillanes and the mutineers were arrested while several journalists covering the event were detained. The journalists were subsequently released. 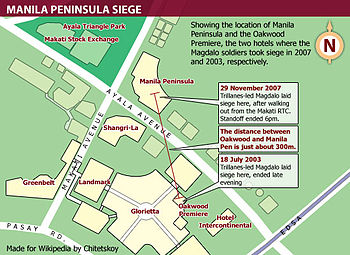 Location of Oakwood Premiere and The Peninsula Manila in Makati. These hotels had become the location of the Magdalo mutiny of 2003 and 2007, respectively.

Led by Sen. Antonio Trillanes IV and Army Brig. Gen. Danilo Lim, thirty soldiers with armed guards, on trial for the 2003 Oakwood Mutiny, walked out of court and marched towards the luxury Peninsula Manila Hotel. They were joined by former vice-president Teofisto Guingona, Jr., who called the gathering "New EDSA". They were also joined by other military personnel and civilians carrying M-16 or M-14 rifles. The soldiers, some of whom were carrying and wearing Magdalo (mutineers) flags and pins, marched along Makati Avenue and occupied The Peninsula Manila Hotel's second floor. Sen. Trillanes and Brig. Gen. Lim stayed in the Rizal function room negotiating most of the time.Template:Citation needed

"Senator Antonio Trillanes, Brig. Gen. Danilo Lim, Magdalo soldiers, their guards and the people have started marching towards Makati triangle. [...] We presently find in existence a dangerous concept where the armed forces now owe their primary allegiance and loyalty to those who temporarily exercise the authority of the executive branch of the government rather than to the country and the Constitution they have sworn to protect. That is a concept we defy and struggle to eradicate. If you believe you are a man of will and courage with unselfish motives and brave enough to fight against such tyranny, rise up and be counted!"[2]

The Philippine National Police declared a red alert status in Metro Manila as a result of the incident.Template:Citation needed

At 2:46 pm PST, Police Director Geary Barias, chief of the National Capital Region Police Office, ordered everyone inside the Manila Peninsula to vacate, according to reports on radio and television.

"I am asking all guests of the hotel to leave so that we can do our jobs," Barias said in a live interview.[3]

The Philippine military rushed at least three battalions of infantry, consisting of roughly 1,500 troops, to Metro Manila's Makati business district to crush the mutiny. The Philippine Marines on Thursday said it would be loyal to the chain of command and would help crush the rebellion led by Sen. Antonio Trillanes IV and Brig. Gen. Danilo Lim. The Marines sent three armored personnel carriers and two trucks of troops to Makati to support government police and military units in the area.[4]

Judge Oscar Pimentel, Makati Regional Trial Court, issued an arrest warrant and Director Geary Barias, National Capital Region Police Office director, stated "Arrests will be made at 3 p.m."[5] The Philippine National Police (PNP) gave Sen. Antonio Trillanes IV and Brig. Gen. Danilo Lim until this time to surrender, as it evacuated guests and personnel inside The Peninsula Manila Hotel.[6] Lim stated: "We make this fateful step of removing Mrs. Macapagal Arroyo from the presidency and undertake the formation of a new government."[7]

The planned assault was held off until 3:58 p.m. At 3:58 p.m., 50 Special Action Force[8] commandos lined up outside The Peninsula Manila Hotel to enforce the arrest of rebel soldiers. The commandos, who were carrying gas masks, went into formation after rebel soldiers refused to accept warrants for their arrest. There were indications that the armed rebel soldiers inside the hotel were ready for battle.[9]

Armored personnel carriers and Armoured fighting vehicles (AFV) of the police and the military were also dispatched around the building. The movement intensified after 4 p.m., when policemen in full-battle gear fired warning shots as they prepared to storm the hotel.[10] Footage taken by ABS-CBN Sky Patrol showed Special Action Force commandos moving in battle formation towards the hotel.[11]

Glass on the windows was broken to allow the dispersal of tear gas to those held up inside the hotel. Afterwards, an exchange of fire was heard between the military and the Magdalo Group. Firing stopped at 4:30 p.m.[12][13] Bishop Julio Labayen appealed: "Please do not storm the place.. so nobody gets hurt." (4:37 p.m.) Various TV and radio crews, as well as other media personnel, were trapped in the hotel, while the Palace appealed to media and the public to stay away from Makati.

The AFV broke into hotel lobby at 5:10 p.m.,[14][15] with soldiers pouring into the hotel. Sen. Antonio Trillanes IV and Brig. Gen. Danilo Lim decided to surrender to the arresting authorities to avoid loss of lives as several journalists and other civilians were with them.[16] Director Geary Barias declared that the standoff at the Manila Peninsula Hotel was over as the mutinous soldiers agreed to leave the hotel and surrender to Barias after the 6 hour siege (5:30 p.m.).[17]

Trillanes, Lim, and their cohorts, and Guingona were arrested by the Philippine National Police and were sent to National Capital Region Police Office headquarters in Camp Bagong Diwa, Taguig. ABS-CBN News and Current Affairs, Bloomberg News, NHK, DWIZ, Manila Bulletin and Malaya journalists who were covering the event were also arrested. All of them were asked to leave their belongings and to not bring anything with them. They were advised by a lawyer not to talk as what the police were doing was against the law and violated their rights. Roman Catholic priest Fr. Robert Reyes and Bishop Julio Labayen were also seen boarding the same bus where the arrested press correspondents were transported in.[18][19] The Special Action Force was involved in arresting Brigadier General Danilo Lim.[20]

Trillanes said he was ready to face whatever charges the government will give him.

In a TV interview with ABS-CBN, National Defense Secretary Gilberto Teodoro defended the arrests of media reporters as the arresting officers "didn't know the journalists and may have mistook them as renegade soldiers," although several of these journalists were hosting several prominent TV programs. Several journalists, mostly from TV and radio, were released at the NCRPO HQ.[21]

It was announced that a curfew from midnight to 5 am will be implemented in the regions of Metro Manila, Central Luzon, and Calabarzon for the night of November 29–30.[22]

The Philippine National Police ordered a manhunt for the soldiers who escaped from the hotel, including Marine Captain Nicanor Faeldon; meanwhile, several persons of interest were detained at Camp Bagong Diwa in Taguig.[23] Several journalists were also "processed" at Camp Bagong Diwa and were subsequently released. On December 1, fifty individuals, including Trillanes, were charged of rebellion at inquest proceedings.[24]

On December 3, the Peninsula Manila became fully operational with an estimated damage at US$1.2 million. The next day, Armed Forces chief-of-staff Hermogenes Esperon announced the arrest of Communist New People’s Army operative Myrna Hombrebueno in connection with the rebellion, proving the connection between the Communists and rebels. Had Trillanes succeeded, according to Esperon, a National Transition Council (NTC), allegedly would replace the Arroyo administration, and the Philippines put under a "lean and mean" military and police force (per 5-page document – "Proposed Program").[25] Razon himself revealed that a "female press reporter" provided Faeldon a fake press I.D. card that caused his escape and that he is still inside Metro Manila. Razon also sacked the Makati City police chief for failure to prevent the walk-out.[26]

The Makati City Regional Trial Court (RTC), upon receiving the cases on December 6, dismissed the cases against Guingona, Reyes, and other civilians, on December 13.