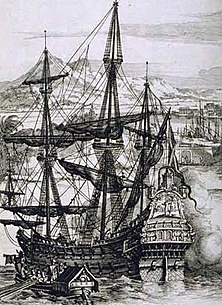 Galleons were large, multi-decked sailing ships used by European states as armed cargo carriers from the 16th to 18th centuries.

The Manila Galleon Trade is an annual round trip trade carried in a Spanish sailing vessel across the Pacific between the ports of Manila and Acapulco, a coastal city in present-day Mexico. The trade, which took place during 1565-1815, became the sole means of communication between Spain and the Philippines. The trade was noted for the length and duration of its voyages. It took over 6,000 miles and six to nine months to sail from Manila to Acapulco. The galleon, which was usually enormous in size (up to 2,000 tons), made Asian luxuries such as spices and porcelain available to the West.

In 1571, Miguel López De Legazpi sent two ships back to Mexico which contained Chinese silks and porcelain to be exchanged for needed provisions. Spain was well prepared to conduct this trade because of the convenient geographical location of Manila and the large supply of silver of America.

History/Origins of the Galleon Trade

The origins of the Galleon Trade can be traced back in 1492 when Christopher Columbus discovered America when the Spanish crown was searching for a sea passage to China and India. In 1513, Spanish explorer Núñez de Balboa crossed the Isthmus of Panama and discovered the Pacific Ocean. King Charles I (Emperor Charles V) dispatched Portuguese sailor Ferdinand Magellan to reach Asia and the Spice Islands avoiding the East Route, which was under the Ottoman rule. Magellan’s expedition left Seville in August 1519 and sailed southwards. They reached a passage that connects the Atlantic and Pacific Oceans through a Strait which was subsequently named after him. He discovered the Philippines in his voyage westwards, but he was killed in a skirmish with local natives.

Spanish sailor Juan Sebastián de Elcano took command and led the remaining ships back home and arrived at Sanlúcar de Barrameda in September 1522. In search of return routes, other voyages followed. Among them were the ones led by García Jofre de Loaysa in 1525, Álvaro de Saavedra in 1542, and Miguel López de Legazpi with the pilot and cosmographer Andrés de Urdaneta in 1564. Urdaneta discovered and plotted a path across the Pacific Ocean known as Urdaneta’s Route.

In November 1564, Legazpi and Urdaneta sailed from the west coast of New Spain (Mexico) and arrived at the Philippines in February 1565. In June 1565, Urdaneta-led galleon San Pedro set sail and found the Kuroshio Current, which obtained favorable winds. These led the ship towards the Californian coast, then to the port of Acapulco in Mexico, where they arrived on 1 October 1565.

In Manila, the ships loaded local products: spices from Ceylon, Moluccas, and Java; silk, ivory, chinaware, lacquer, mother of pearl from Xiamen and Japan; and carpet, tapestries, and cotton garments from India. At the west coast of New Spain, the ships unloaded the goods and transported overland to the port of Veracruz in the east coast. They were again loaded onto the vessels headed towards Seville and Cadiz.

Officers, soldiers, missionaries, as well as silver, animals, and plants were transported to Acapulco. Thus, the so-called route of the Manila Galleon was officially established in 1565. It linked Asia, America, and Europe through Manila, in the Philippines, and Acapulco in Mexico.

Manila became one of the world’s greatest ports during the heyday of the galleon trade as it served as a focus for trade between China and Europe. The cargo, which unloads at Acapulco, normally yielded a profit of 100-300 percent. On its return voyage, it brought back Mexican silver and church personnel to share communications from Spain.

Chinese silk was the most important cargo that was transshipped via the galleon. Chinese merchants also carried to Manila damasks and other fabrics, gemstones, gold jewelry, and porcelain. Other products were from India (cottons and other fabrics); Japan (lacquerware and screens); the islands of the Indonesian archipelago (aromatic substances, pepper, cloves, nutmegs, mace); Indochina (gemstones and hard woods); and the Philippine Islands themselves (cinnamon, coconut products, beeswax, and fabrics).

When the news about the arrival of the galleons to Acapulco in January or February reached the populace, plans were made for a festive fair trade. The ships were met by officials from Mexico who examined the cargo. Upon arrivals, the sick were disembarked and the merchandise were unloaded to be sold at the fair. Residents bought and adorned themselves and their homes with Oriental goods.

The trade helped fashion Philippine society, which relied upon its income, merchandise, and the services of its participants. The infusion of Chinese goods and art forms into Hispanic and Native American material culture remains visible in Mexico today. Mexico’s Plaza Mayor (Zocalo) became a place of stalls and shops that sell Asian imports. They called it the Parian, after the Chinese district of Manila which was known as such. Manila’s Chinatown, on the other hand, is considered the oldest in the world.

The westbound galleons could reach Manila in three months. The eastbound galleons faced the harder challenge, as they would take a month to clear the Philippine archipelago before sailing out into the open water of the Pacific. This needed to be completed before the onset of the typhoon season or by the end of June. However, this was rarely achieved, and many galleons were wrecked in fierce typhoons. A successful voyage from Manila to Acapulco lasted from six to nine months–which made the problems of provisions and health daunting.

Even if the sought-after Chinese products were acquired, the Philippines and its commerce were liabilities. The galleons cost enormous sums to maintain but succeeded in directing vast quantities of American silver away from the imperial treasury.

The trade also served as an economic lifeline for Spaniards in Manila. They came to depend on the annual vessel so much that when a ship went down at sea or was captured by English pirates, they plunged into economic depression. It also affected the economic development in the Philippines, as virtually all Spanish capital was devoted to trading with Chinese goods.

Because of the galleon trade, Mexico became a multi-cultural, cosmopolitan nation. It became one of the richest cities in the world with leading cultural and intellectual aspects. Aside from being able to introduce chocolate and other crops to the world, its advancements also included having a printing press as early as 1535, having the first universities in the American continent, and a city of books, writers, and students with influences from Asian cultures. Also, Mexico and the rest of Spanish America grew rich from trading and silver mines. Antonio de Morga’s Sucesos de las Islas Filipinas – a firsthand account of the early Spanish colonial venture into Asia but also its relations with China, Japan, and Southeast Asia–was published in Mexico in 1609.

Manila, which ranked below Mexico in terms of urbanization and sophistication, was more of a regional trading hub where Southeast Asian nations sent their goods to be consolidated for shipping.

The Chinese brought goods which competed in price, quality, and innovation with the rest of the world. Serving as part of the galleon crews, they were considered best at putting more merchandise in limited spaces and chests on the galleon. Because of hard work, they became very wealthy. Due to huge migration of Chinese through the galleon trade, Manila was almost a Chinese city. Threatened, the Spaniards taxed them. They were restricted to the Parian, an area outside Intramuros to keep them within range of the cannons pointed in their direction. Differences in culture and several deadly Chinese revolts complicated further the uneasy relationship between the Spanish and the Chinese.

Domingo de Salazar, the first bishop of Manila recommended opening China for evangelization. He admired how the Chinese were able to turn Tondo into one of the best parts of the city–a hive for commerce through establishments that grew out of a silk market. While he ratted on abusive Spaniards who mistreated the Chinese, he tried to understand and minister to them, later entrusting them to the care of the Dominicans.

Manila also attracted predators who dreamed of the riches it had. The Dutch East India Company, for example, believed that to maintain trade, it needed war. It led the way to take Manila in 1762. But it was not able to project much force. Despite problems with the Chinese in Manila and that both sides were breaking rules along the way, Spain was able to run the galleon trade for years. There was an equilibrium in their relationship that brought on trade understanding and diplomatic relations.

Merchants in Spain found that the merchandise from Asia competed too successfully with Spanish exports to America. They argued for sever restrictions on the volume of the trade. Although contraband trading was common throughout the Spanish empire, having it in the Pacific galleons was deemed notorious. Precise estimates of the extent of the illegal trade were elusive but research suggest that as much as ten times the permitted amount of cargo was shipped.

Forty years after 1785, the well-defined system of the galleon trade lost its distinctive simplicity in structure. Rival lines to alternative ports dispersed Manila’s trade partners. Ships from Spain cut across the whole system until they were bypassing Manila to directly trade at Indian and Chinese ports. Manila’s trading potential was also reduced because of the Napoleonic wars and the Spanish-American revolts. By mid-seventies, the Philippines was able to develop a plantation economy which brought self-sufficiency and undermined the galleons. The trade was officially abandoned in 1813. There was a brief revival between 1815 and 1820 but the sailings to Spanish America ceased and by 1826, the flow of bullion to Manila stopped. As the trade system disintegrated, Manila lost its pre-eminence in the Southeast Asian trade structure. New routes replaced the old system and ships from India began sailing directly for Spanish America. Soon, those from China followed suit. Other traditional lines of trade inherited the remaining portions of the Manila system and by 1826, the decline of Manila was complete. This was considered a symptom of the collapse of the Spanish empire.