Mandaue City is located on the central-eastern coastal region of Cebu. Its southwest coast borders Mactan Island where Lapu-Lapu City is located and is connected to the island via two bridges: the Mactan-Mandaue Bridge and Marcelo Fernan Bridge. Mandaue City is bounded on the north by the town of Consolacion, to the east by the Camotes Sea, and to the west and south by Cebu City.

It is one of three highly urbanized cities on Cebu island and forms a part of the Cebu Metropolitan area[1] and is part of the Sixth District Cebu joined with the municipalities of Consolacion and Cordova. Although qualified for a lone district since 1991, this was neglected by lawmakers. However, as of 5 April 2019, President Rodrigo Duterte recently signed a law declaring this city as a lone legislative district.[2]

A community was established in Mandaue by a flourishing group of Austronesian people. The Venetian chronicler Antonio Pigafetta wrote of a settlement called misspelled the place Mandani which existed in the area with a chieftain named Apanoaan[3] some called him Lambuzzan in other accounts.[4]

Mandaue natives were forced into a town as decreed by the Spanish authorities. This may have started off as a mission village (which included present day Consolacion, Liloan and Poro) serving as a bulwark for the church in the northern Cebu and was managed by the Jesuit in 1638 then a century later by the Recollects.[5]

The Philippine Revolution of 1898 gave the town a new form of administration in accordance with the organic decree of the Central Revolutionary Government. The short-lived revolution was overthrown by the American troops and a battle nearly destroyed the town in 1901, killing Presidente Benito Ceniza.Template:Sfn

Mandaue became independent from being an American Commonwealth and a Japanese garrison on July 4, 1946 along with the entire nation. Mandaue became a chartered city on August 30, 1969 and decades later it was recognized as an HUC (Highly Urbanized City) on February 15, 1991.[7] In early-April 2019, Duterte signed a law that declared Mandaue City as a lone legislative district, which means that it will be separated from the sixth district, and will have its own representative of the lone district.[8][9] Template:Clear left

It is one of the two (the other one being the municipality of Consolacion) local government units located within the mainland Metro Cebu where the elevation of land is less than Template:Convert.

Many of the areas of the city are extremely flat. About 77.37% is within the 0-8% slope category. Barangays belonging to this region are Centro, Looc, South Special Administrative Zone, Cambaro, Opao, Umapad, Paknaan, Alang-alang, Tipolo, Ibabao, Guizo, Subangdaku, Mantuyong, Maguikay and Tabok. The greater portion of the city, comprising about 70%, is dominated by the Mandaue Clay Loam soil series. This is found in the 0-2% and 2-5% slope ranges. Faraon clay loam characterizes the rest of the land with slope range from 5-8% and up to 25-40%.[10]

Aerial photo of the Mactan Channel looking south. Mandaue is on the right side while Lapu-Lapu City is on the left

About 40 percent of Cebu's export companies are found in Mandaue. The city is dubbed as the industrial hub of Region VII and hosts about 10,000 industrial and commercial businesses, making it a “little rich city” in the country. It is home to some of the world's biggest companies such as San Miguel Corp., Coca-Cola Bottling Corp. and Shemberg, the number one exporter of carrageenan. Mandaue City also accounts for 75 percent of the country's total exports in the furniture sector, making the city the furniture capital of the country.[13]

Mandaue Fiesta: Celebrated on May 8 in honor of the patron St. Joseph. Activities that are typically held during this feast are the inter-barangay sports competition, Miss Mandaue ( the longest-running beauty competition in the province), rodeos, street festival, bailes, fairs, and many more.Template:Citation needed

Panagtagbo sa Mandaue: This is Mandaue's current major festival in honor of the Holy Family. This is celebrated every 2nd week of January on the eve of theTraslacion (Transfer of Relic), of one of the significant religious events of the Sinulog Festival which commemorates the union of the Holy Family. In the Translacion, the Santo Niño and Birhen sa Guadelupe come and stay over at the shrine of Saint Joseph in Mandaue for an overnight vigil. This happens on a Friday, and on the early morning of the following Saturday, a fluvial procession is held on Cebu Strait going back to the Minor Basilica. In the festival, there are singing and dancing competitions with a street dancing during the Bibingkahan in honor of Santo Niño. At night, there is a ritual showdown performance which is the highlight of the cultural-religious events.Template:Citation needed

Kabayo Festival: The Kabayo (Horse) festival also known as Governor's Cup is a horse racing and different equestrian sports with the western way of riding event held annually in the second week of February.Template:Citation needed

Pasigarbo sa Sugbo: It is a festival showcasing Cebu's culture, faith, history, products, and festivals from each individual town. It is held annually around the 6th of August which is the Charter day of the Province of Cebu. It was formerly held in Mandaue City at the Cebu International Convention Center(CICC), but was transferred to the Cebu City Sports Complex in Cebu City in 2019 due to the abandoned and disrepaired state of the convention center.Template:Citation needed

Many famous Cebuano meals like the lechon[16] or inasal, eaten with achara or pickled vegetables. The sugba or barbecue of either isda (fish), baboy (pork), manok (chicken) or baka (beef) is found all over Mandaue eaten with puso, a diamond-shaped hanged rice covered in coco leaves. Kinilaw[17] is raw meat usually pork or fish drenched in vinegar and salt. The buwad or dried seafood, either fish or squid, can be pungent with a crunchy and chewy texture. There are some exotic meals that can be found like dinuguan or pig's blood which is eaten like a soup. Barbecued chicken feet are liked by many locals.

Original cuisine in Mandaue includes bibingka which is steamed rice cakes mixed with coconut and sometimes egg. Binangos paired with rice is made of ground up corn with Bolinao fish. This dish is found only in Mandaue; other delicacies includes the tagaktak, the seasonal buriring fish (stewed with iba) and the famous masareal.

Mandaue City's road network is composed of a national highway which connects the city to its neighboring cities and municipalities, and a national secondary road which traverses the city's metropolitan area. The total length of the city road network (paved and unpaved) and the four bridges, is about Template:Convert, broken down into:

Land transportation is being served by PUJ, utility vehicles, mini-buses, multi-cabs, tricycles, trisikads and for cargoes, trailers and vans. Sea transport of Mandaue is highly dependent on Port of Cebu and Cebu International Port, because of the city's proximity to these facilities. 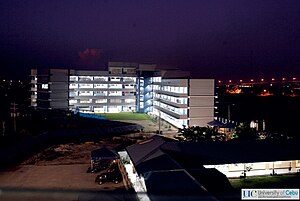 Lapu-Lapu–Mandaue campus of the University of Cebu.

Mandaue houses two universities, the Cebu Doctors' University and the Lapu-Lapu–Mandaue campus of the University of Cebu. There are also technical schools like TESDA in barangays Banilad and Looc and other private institutions that provide certificate degrees. Associate degree, Baccalaureate Degrees, Master's and Doctoral programs.

Mandaue has institutionalized learning with the Cabahug Medal which was started on 1923 by Sotero Cabahug as a medal of academic excellence annually. The Mandaue Fraternal Society was also created in the early part of the 19th century to provide a community for the professionals during the time when Mandaue was still a sleepy town.

Television stations based in Mandaue City: