To read this article in Filipino, see Kongreso ng Malolos.

The Malolos Congress, also known as the Revolutionary Congress and formally known as the National Assembly, was the legislative body of the Revolutionary Government of the Philippines during the Spanish-American War. Members were chosen during the Malolos Congress elections held from 23 June to 10 September 1898. The assembly consisted of elected delegates who were chosen by balloting in provincial assemblies, as well as appointed delegates chosen by President Emilio Aguinaldo to represent regions under unstable military and civilian conditions.

Regular session for the newly established Revolutionary Congress began on 15 September 1898 at Barasoain Church in Malolos, Bulacan. President Aguinaldo presided over the opening session of the assembly. The first significant act of the Congress was the ratification on 29 September of the independence proclaimed at Kawit on 12 June 1898.

Soldiers of the Philippine Revolutionary Army during a session of the congress. 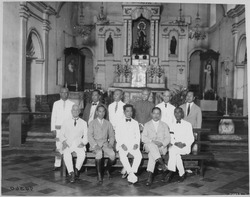 Emilio Aguinaldo (seated, center) and ten of the delegates to the first Assembly of Representatives.

In 2006, the president of the Bulacan Historical Society, engineer Marcial Aniag, asserted that among the 85 delegates who convened in Malolos, there were 43 lawyers, 17 doctors, five pharmacists, three educators, seven businessmen, four painters, three military men, a priest, and four farmers.[3] Five of the 85 delegates did not have a college degree.[3]

Ratification of the declaration of independence

One of the first acts of the Revolutionary Congress was the ratification on September 29, 1898 of the Philippine Declaration of Independence against Spain, which had been proclaimed on June 12, 1898.[4]

Mabini had planned for the Revolutionary Congress to act only as an advisory body to the president and submitted a draft of the Constitutional Program of the Philippine Republic. A committee was created to draft the constitution, with Felipe G. Calderon as its most prominent member. Paterno, on the other hand, submitted a constitutional draft based on Spanish Constitution of 1869. The Congress, however, began work to draft a constitution that drew inspirations from the those of Mexico, Belgium, Guatemala, Costa Rica, Brazil, and France.[5] The resulting document, the Malolos Constitution, was promulgated on 21 January 1899.[6] Its proclamation resulted in the creation of the First Philippine Republic, which replaced the Revolutionary Government.