Maguindanao (Tagalog: [maˈɡindɐnaʊ], Maguindanaon: Prubinsya nu Magindanaw; Iranun: Perobinsia a Magindanao; Filipino: Lalawigan ng Maguindanao) is a province in the Philippines located in the Bangsamoro Autonomous Region in Muslim Mindanao (BARMM). Since 2014 the provincial capital is Buluan[1] but the legislative branch of the provincial government, the Sangguniang Panlalawigan, convenes in the old provincial capitol in the town of Sultan Kudarat.[2] It borders Lanao del Sur to the north, Cotabato to the east, Sultan Kudarat to the south, and the Illana Bay to the west. 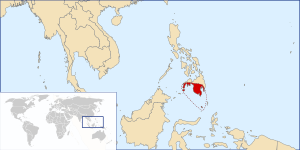 The Sultanate of Maguindanao at its greatest extent in the 17th century.

Shariff Mohammed Kabungsuwan of Johore introduced Islam in the area at the end of the 15th century. He subsequently married a local princess from the Maranao Tribe of Malabang and Maguindanao Province, and established the Sultanate of Maguindanao. The Cotabato Valley formed the sultanate's heartland but its influence extended from the Zamboanga Peninsula to Sarangani Bay and Davao.

The Spaniards launched expeditions to subdue the area throughout the colonial era but they never gained control of the region until the middle of the 19th century after the Spaniards established a military post at what is now Barangay Tamontaka, one of the earliest Christian settlements founded south of the Philippines, in present-day Cotabato City.

The historical province of Cotabato covered the present area of Maguindanao. In 1903, the American colonial government established the Moro Province and made Cotabato as one of its districts. Upon the conversion of the Moro Province into the Department of Mindanao and Sulu in 1914, the districts were made into provinces.[3][4]

In 1942, the Japanese Imperial forces entered what is now Maguindanao.

In 1945, Maguindanao was liberated by allied Philippine Commonwealth troops and Maguindanaoan guerrilla units after defeating the Japanese Imperial forces in the Battle of Maguindanao during the Second World War.

Creation as a province

The territory of the old province of Cotabato was reduced in 1966 when several of its municipalities were separated from it and constituted into the newly created province of South Cotabato.[5] In 1973, Cotabato was dissolved when it was split to create three new provinces: Maguindanao, (North) Cotabato and Sultan Kudarat.[6]

Maguindanao is the only Muslim-majority province of the four created out of the original Cotabato Province. In 1989, majority of its voters opted to join the Autonomous Region in Muslim Mindanao but Cotabato City did not, which, ironically, has since served as the provisional capital of the Autonomous Region in Muslim Mindanao (ARMM) and hosted line agency offices for the province.

On October 31, 2006, Maguindanao voters approved the creation of a new province to be composed of 10 towns from the province.[7] Of more than 500,000 voters registered, 285,372 favored the creation of the province, and 8,802 voted against it. The new province, Shariff Kabunsuan, established through Muslim Mindanao Autonomy Act No. 201 by the ARMM Regional Legislative Assembly, became the country's 80th province and the 6th in the ARMM. It was composed of the towns of Datu Odin Sinsuat, Kabuntalan, Upi, Sultan Kudarat, Datu Blah T. Sinsuat, Sultan Mastura, Parang, Buldon, Matanog and Barira.[8] However, in July 2008, the Supreme Court, in an 8–6 vote, nullified the province's creation, restoring its municipalities to Maguindanao, ruling that "Only Congress can create provinces and cities because the creation of provinces and cities necessarily includes the creation of legislative districts".[9] 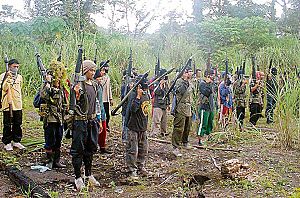 On November 23, 2009, a 2010 gubernatorial election caravan supporting Esmael Mangudadatu, vice mayor of Buluan, was attacked.[10] Fifty-seven people were killed, including Mangudadatu's wife and sisters, supporters, local journalists, and bystanders.[11] On December 4, 2009, a number of homes belonging to the Ampatuan political family were raided in connection with the massacre.[12]

The declaration of martial law led to the "arrests without warrants" of other members of the Ampatuan clan who have been linked to the November 23 massacre of 58 civilians.[15]

The 44 police officers who perished during the clash

On August 15, 2011, Mangudadatu and his convoy were ambushed as they were on their way to his birthday celebration.

On January 25, 2015, 44 members of the Special Action Force were killed after they killed the Jemaah Islamiyah terrorist Zulkifli Abdhir aka Marwan, by allegedly Moro Islamic Liberation Front and Bangsamoro Islamic Freedom Fighters in Mamasapano, Maguindanao.[16][17]

On February 2016, Maguindanao experienced the effects of the 2014–16 El Niño, causing destruction on rice and corn fields due to drought.[18] The province declared a state of calamity in response to the damages caused.[18]

Maguindanao is situated in the central section of Mindanao, bordered by Lanao del Sur to the north, Cotabato to the east, Sultan Kudarat to the south, and the Illana Bay to the west.

Maguindanao comprises 36 municipalities, further subdivided into 508 barangays. Cotabato City, although geographically grouped with Maguindanao, is administratively independent from the province.

The province has seen recent establishments of new municipalities, especially during the 2000s. Then ARMM Regional Legislative Assembly (RLA) secretary Dick Mali said such establishments would help in "decentralizing functions and resources" and provide the people "more efficient public service and governance from their public officials." However, Benedicto Bacani of the Institute of Autonomy and Governance in the Notre Dame University said such acts are methods to prevent potential conflicts between political families by having their own local government units where they can have governmental positions.[19]

House Bill No. 5185 was introduced in the House of Representatives on March 2, 2017 by former Representative Bai Sandra Sema who is barred by law to run for another term in her current district in 2019. It seeks to establish a new province called Maguindanao North, consisting of 11 municipalities and 2 legislative districts, of which Datu Odin Sinsuat will be the designated capital.[20] Her successor, Congressman Datu Roonie Sinsuat, Sr. recently filed a new bill seeking for the same division – only this time, it shall be named Western Maguindanao.

The population of Maguindanao in the 2015 census was 1,173,933 people. When Cotabato City is included for geographical purposes, the province's population is 1,473,371 people.

The majority (64.5 percent) of the people in Maguindanao are Maguindanaoans. The Iranuns which dominate the northern towns of Parang, Barira, Buldon and Matanog make up the second largest group with 18.4 percent. The Tedurays, which are the lumads of the southwestern highlands of the province make up 8.4 percent of the entire population, while Hiligaynons and Cebuanos constitute the remaining significant groups in the province with each making up 3.2 percent of the population.

The main native languages are Maguindanao and Iranun, while Tagalog has emerged as the primary language among younger generations and is the primary medium of education.[21] Cebuano, Hiligaynon, and Chavacano are also spoken by both Christians and Muslims, with the Chavacano dialect native to Cotabato City being called Cotabateño, which evolved from the Zamboangueño dialect. Teduray, also native to the province, is spoken in the municipalities of Upi, South Upi, and Datu Blah T. Sinsuat. English, the country's other official language is also spoken, while Arabic is taught in Islamic schools.

Maguindanao inhabitants are predominantly practitioners of Islam which comprises 82.99% of the population,[22] majority of which are Sunnites. A minority are Christians (mostly Roman Catholics), who are mostly Cebuanos, Ilonggos and Chavacanos.Template:Citation needed Roman Catholics of Maguindanao fall under the jurisdiction of the Roman Catholic Diocese of Kidapawan, a suffragan of the Archdiocese of Cotabato. Iglesia ni Cristo (INC) has several locales in Maguindanao.

Maguindanao is divided into two congressional districts, which elect members to the House of Representatives. For the brief period that the province of Shariff Kabunsuan existed, Maguindanao became a lone-district province. Since the appointment of a new set of provincial officials for the reunified province of Maguindanao by the ARMM Governor in January 2009, the provincial government has reverted to the Sangguniang Panlalawigan district configuration from before Shariff Kabunsuan was created.

When the province was established in 1973, the designated seat of government was the municipality of Maganoy.[6] The first appointed governor, Simeon Datumanong, held office in Limpongo,[23] a former barangay in Maganoy which is now part of the municipality of Datu Hoffer Ampatuan.

Datumanong's successor Zacaria Candao, on the other hand, held office at P.C. Hill,[23] the site of the former headquarters of the Philippine Constabulary[24] in Cotabato City, an autonomous chartered city not under Maguindanao's provincial jurisdiction.

In 1977 following the resignation of Candao, President Ferdinand Marcos moved the province's seat of government to the municipality of Sultan Kudarat (hometown of the newly-appointed governor Sanggacala Baraguir) by virtue of Presidential Decree No. 1170.[25] During his term Baraguir held office at the then-newly-constructed provincial capitol in that municipality's Barangay Simuay Crossing.[23]

The next governor, Sandiale Sambolawan, held office in his hometown of Maganoy following his election to the governorship in 1980.[23] In an attempt to legitimize the restoration of Maganoy's status as the seat of provincial government, Batas Pambansa Blg. 211 was enacted in 1982, but with the explicit provision that the change will only take effect after a plebiscite affirms the transfer.[26] A plebiscite was scheduled for December 18, 1982,[27] but was never administered,[28] thus making the municipality of Sultan Kudarat still capital of Maguindanao by law (de jure), but Maganoy being the capital in practice (de facto). Following the end of the Marcos Regime, the next two governors – Zacaria Candao (1986–1992; 1995–2001) and Norodin Matalam (1992–1995) – both held office in the existing capitol at Sultan Kudarat thereby restoring the municipality's status as both de jure and de facto provincial capital from 1986 to 2001.

Despite the lack of legal justification in the form of a law amending P.D. No. 1170 of 1977 or the passage of a supporting Sangguaniang Panlalawigan (SP) resolution, the next governor, Andal Ampatuan Sr. (governor from 2001 to 2008), and his successor, son Sajid Ampatuan (2008–2009), held office in the Ampatuan clan stronghold of Shariff Aguak (renamed from Maganoy in 1996[29]), citing security concerns connected to clan rivalry.[2] A new Template:PH peso218-million provincial capitol complex, inaugurated in 2009 in the presence of President Gloria Macapagal-Arroyo,[30] was located adjacent to the homes of the Ampatuans,[23] and sat on a piece of Amaptuan clan land that had not been legally deeded to the government.[31] The Ampatuans were even known to spend more time within the "satellite offices" they set up within their private properties, despite though the new capitol being located adjacent to their homes.[32]

Esmael Mangudadatu, who took office after defeating Andal Ampatuan Jr. in the 2010 gubernatorial election, cited security concerns when he decided to work from a "satellite office," named the Rajah Buayan Silongan Peace Center, in his hometown of Buluan;[23] this move was supported by Resolution No. 5, series 2010, of the Sangguniang Panlalawigan (SP) of Maguindanao.[33] SP Resolution No. 78, dated May 3, 2011, further allowed the transfer of the legislative branch of the provincial government (Sangguniang Panlalawigan) to the rehabilitated old capitol site in Barangay Simuay Crossing, Sultan Kudarat.[2] This effectively made both Buluan and Sultan Kudarat – located 120 kilometers apart by road – the seats of the executive and legislative branches of provincial government respectively.[32]

On April 3, 2012, the SP of Maguindanao issued Resolution No. 132, reiterating that the town of Sultan Kudarat was the capital of Maguindanao.[2] However this was superseded by a new resolution passed in 2014 naming Buluan the new capital of Maguindanao.[1] Buluan's Rajah Buayan Silongan Peace Center now serves as the provisional capitol building, pending the completion of the executive building in the new capitol complex.[23] However, the legislative branch of provincial government, the Sangguniang Panlalawigan of Maguindanao, continues to hold sessions in the rehabilitated buildings of the old provincial capitol in Simuay, Sultan Kudarat.[2]

The Ampatuan-built former provincial capitol complex in Shariff Aguak, initially planned to be converted for public school use,[34] has been planned to become the new headquarters of the ARMM's Bureau of Fire Protection and eventually became an infantry brigade of the Philippine Army.[35] However, incumbent governor Bai Mariam Mangudadatu holds her office in the Shariff Aguak Provincial Capitol and plans to convert the Buluan provincial capitol as district hospital.[36]

Brass gongs used as a main melodic instrument in the Kulintang ensemble.

The native Maguindanaon culture revolves around Kulintang music, a specific type of gong music, found among both Muslim and non-Muslim groups of the Southern Philippines.