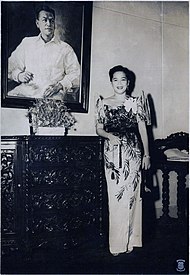 7th First Lady in the Philippines

Luz Banzon Magsaysay (June 25, 1914 – August 17, 2004) was the wife of Philippine President Ramon Magsaysay and the seventh First Lady of the Philippines.

As the President's consort, Magsaysay was active in many socio-civic programs especially with the Philippine National Red Cross, of which she was honorary Chairwoman for several years. She is remembered as one of the most admired First Ladies and distinguished herself for her warmth and simplicity.

Magsaysay was widowed at 43 years old when President Magsaysay died in an airplane crash in 1957, three years and two months into his rule, making it was one of the shortest presidential terms in Philippine history. She dedicated herself to the preservation of her husband's memory and led a simple life that was true to her husband's legacy.[1] Magsaysay herself died on August 17, 2004. In commemoration of her memory, a Barangay in Cebu City, near the Former Airport in Lahug (near the Present Waterfront Hotel and Casino), was named as Barangay Luz in the late 1960s and Barangay Luz Banzon in Jasaan, Misamis Oriental.