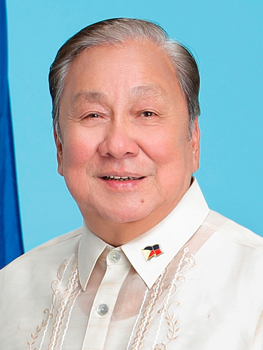 Official Portrait of Representative Lito Atienza, Jr. of the BUHAY Party List in the 18th Congress of the Philippines

Jose “Lito” Livioko Atienza Jr. (born 10 August 1941) is a Filipino politician who served as Party-list Representative for Buhay since 2013, House Deputy Speaker since November 2020, Secretary of the Department of Environment and Natural Resources (DENR) from 2007 to 2009, and Mayor of Manila City from 1998 to 2007. He is the host of the television series Maynila.

Atienza is running for vice president in the 2022 presidential elections. He is the running mate of Manny Pacquiao. He filed for his certificate of candidacy on 1 October 2021. Pacquiao said that he chose Atienza as his running mate for the latter’s track record in public service. Like him, Atienza is opposed to the divorce and anti-discrimination bills.

Atienza was born in San Andres Bukid, Manila to Jose J. Atienza, Sr., a distinguished public servant to three Philippine presidents. He was born four months before the outbreak of World War II. His uncle, Hermenegildo Atienza, was a World War II guerilla leader who was appointed Military Mayor of Manila by General Douglas MacArthur after the war. Hermenegildo was also one of the founders of the Liberal Party in 1946. Lito’s uncle, Rigoberto Atienza, was also a World War II veteran, a victim of the Bataan Death March, and a former Philippine Army commanding general. Rigoberto served as Chief of Staff of the Armed Forces in the 1960s. Lito’s third uncle, Arturo, was a renowned lawyer. The four brothers were members of the Hunters resistance against the Japanese occupation during World War II.

Lito took up his primary and secondary education at the Ateneo de Manila University (ADMU) and completed his Bachelor’s Degree in Architecture from the University of Santo Tomas (UST). He utilized his interest and degree in architecture in rehabilitating and renewing the City of Manila.

Atienza organized the Democratic Youth Movement in 1968. He was one of those who survived the Plaza Miranda Bombing in 1971. After the 1971 elections, he was given a job by then Manila Mayor Ramon Bagatsing as his chief information officer. He worked closely with Bagatsing for almost ten years.

During Martial Law, Atienza was arrested twice for exposing human rights violations under the dictatorship regime of then President Ferdinand Marcos. He remained with the opposition even if he was on constant threat of incarceration for opposing Marcos.

Atienza was elected as Member of the Parliament in the At-large Congressional District of Manila (which encompassed the districts of Paco, Pandacan, San Andres Bukid, Sta. Ana, and Sta. Mesa districts) under the Batasang Pambansa in 1984 and served until Marcos was ousted during the People Power Revolution of 1986.

During President Corazon C. Aquino’s term, Atienza was appointed General Manager of the National Housing Authority (NHA) in 1988. He promoted low-cost housing for teachers and policemen.

He ran as Vice Mayor of former Manila police general Alfredo Lim who ran as Mayor. They defeated the incumbent slate of then-Mayor Gemiliano Lopez Jr. Lim and Atienza won a second term in 1995. Lim ran for President in 1998 and Atienza was elected Mayor and took his oath of office on 24 June 1998. He was reelected in 2001 and in 2004. During his term, numerous heritage buildings in Manila were demolished, including the Jai Alai Building, which used to be the best Art Deco building in Asia before its demolition.

Atienza’s son, Ali, ran for Mayor in Manila in 2007 but lost the race to Alfredo Lim.

On 18 July 2007, Atienza was named DENR Secretary, with his appointment enraging environmental groups who dubbed him as the “butcher of Arroceros.” While he was Manila City Mayor, Atienza ordered the closure of the Arroceros Forest Park to give way to the building of an education office and a teacher’s dormitory. The Kalikasan People’s Network said that Atienza had no moral authority to be at the helm of the DENR as he had no qualifications and a clean track record of protecting the environment.

In 2013, Atienza was named representative of the Buhay Party in the House of Representatives. He opposed the divorce bill, the anti-discrimination bill, the Department of Culture bill, and the civil union bill. On the other hand, he pushed for the Philippine Drug War, the Php 1k budget for the Commission on Human Rights (CHR), and the reimposition of the death penalty. He also expressed his intent to campaign for the withdrawal of the Reproductive Health Law or the minimizing of the funding of the law’s programs. He also disapproved the appointment of Gina Lopez as DENR Secretary. Atienza, an investor in the mining industry of the Philippines, has been blocking the national land use bill.

Atienza’s leadership style can be summed up into three aspects:

Among his advocacies and the issues he faced as a government official include: