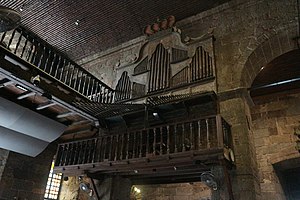 The Las Piñas Bamboo Organ is a 19th-century church organ that is known for its organ pipes that are almost made entirely of bamboo. Housed in the Parish Church of St Joseph in Las Piñas City, it was completed by Father Diego Cera de la Virgen del Carmen, who was also the architect of the stone church and its first resident priest. The organ and the church itself is a popular tourist destination among local and foreign visitors of Las Piñas City. The organ was declared a National Cultural Treasure of the Philippines in 2003.

It was Fr. Diego Cera de la Virgen del Carmen, a Catholic priest under the Augustinian Recollects, who designed and led the construction of both the church and the organ. A native of Spain, Fr. Cera served as parish priest in Las Piñas through many endeavors. Historians considered him as a learned man—a natural scientist, chemist, architect, community leader, organist, and organ builder.

Having previously built organs in the Manila area with some organ stops made of bamboo, he chose bamboo for most of this organ, and only the trumpet stops are made of metal. The choice of bamboo was probably both practical and aesthetic; bamboo was abundant and used to build different products both of practical and artistic nature.

Fr. Cera began work on the organ in 1816, while the church was still under construction; the organ was completed in 1824. During Fr. Cera's lifetime, disasters such as earthquakes and typhoons damaged both the church and the organ, and Fr. Cera himself was the organ's first restorer. Through the years, natural disasters continued to take their toll; the organ was unplayable for years. Somewhat unexpectedly reassembled early in the 20th century, partial restoration took place from time to time up through World War II.

In recent years, several concerted attempts were made to save the instrument. In 1972, a contract for total restoration was awarded to Johannes Klais Orgelbau KG in Bonn, Germany, and it was shipped there in 1973. While the restoration of the organ was taking place in Germany, a massive project was completed at the church. Through Architect Francisco "Bobby" Mañosa and associate Ludwig Alvarez, and with the help of the community of Las Piñas and Manila, the church grounds were restored to their original state.

The restored organ returned home in March 1975, to a joyous welcome by the people of the Philippines. The joint restoration of church and the organ was a triumph of local and international cooperation. Since then the scene of many concerts and festivals, the Bamboo Organ is described by many international organ masters as one of the finest old organs in the world. Its construction of bamboo is noted as being one of the major factors that give it a truly unique and lively sound.

At present, the Las Piñas Bamboo Organ is being maintained by Diego Cera Organ Builders, Inc, regarded as the first Filipino pipe organ building company. It was founded by former members of Las Piñas Boys Choir.

Being the only the only known oldest and largest bamboo organ existing in the world today with a unique and distinct sound as compared to other pipe organs, the National Museum of the Philippines officially declared the Las Piñas Bamboo Organ a National Cultural Treasure on November 24, 2003. A panel of experts evaluated the instrument and were unanimous in their decision, since it is the only 19th century bamboo organ in the Philippines that has survived and still functioning.