Las Piñas, officially the City of Las Piñas (Tagalog: Lungsod ng Las Piñas), is a 1st class highly urbanized city in Metropolitan Manila, Philippines. According to the 2015 census, it has a population of 588,894 people. [3]

Las Piñas was one of the earliest fishing settlements on the shores of Manila Bay. It was proclaimed as a province of Manila either in 1762 or 1797. Agustin,[2] a Spanish historian, and Fr. Juan de Medina[3] placed it at 1762. Las Piñas was formerly called "Las Pilas" due to its separation from Parañaque due to tribal conflicts. On the other hand, Manuel Buzeta recorded the date at 1797.[4] Felix Timbang was the first gobernadorcillo in 1762 while Mariano Ortiz was the first municipal president of the town of Las Piñas.[5]

Las Piňas is famous for its Bamboo Organ, which was built by Fr. Diego Cera and completed in 1824. In 1880, the city experienced an outbreak of cholera and smallpox leading to the loss of many lives. Years later, Las Piňas also became a central battleground between Spanish and Philippine forces during the Philippine Revolution.[6]

In 1901, the municipality of Las Piñas was separated from Manila and incorporated to the newly created province of Rizal pursuant to the Philippine Commission Act No. 137. Two years later, in accordance with Act No. 942, it was combined with the town of Parañaque, with the latter as the seat of a new municipal government.

It was separated from Parañaque to become an independent municipality again on 27 March 1907 by virtue of Philippine Commission Act No. 1625. On 7 November 1975, through Presidential Decree No. 824, Las Piñas was excised from the province of Rizal to form Metro Manila. Las Piñas became one of the municipalities making up the region.

The story about the true origin of the city's name, "Las Piñas", varies. One version mentioned, that traders from the province of Cavite and Batangas shipped their first piñas (Spanish for pineapples) for sale to this town before they were distributed to nearby markets. Another version related that it was "Las Peñas" (the rocks), evident by the quarrying of stones and adobe which were used to construct buildings and bridges. The old church bell from St. Joseph Parish Church founded by Diego Cera has been preserved inside the church museum. An inscription on the bell states, "Siendo cura del pueblo de Laspeñas el M.R.P. Padre Diego Cera se fundió este equilón año de 1820," showing that even during the time of Diego Cera, the town's first parish priest, the town was called "Las Peñas", for some time and eventually was renamed "Las Piñas".[7]

In the 1980s, economic growth erupted due to the advent of the construction of Coastal Road. Las Piñas currently serves as the proper gateway to Calabarzon.[6]

On 12 February 1997, President Fidel V. Ramos signed the bill which elevated Las Piñas from municipality into a city. A plebiscite held a month after approved the city status by its residents, and Las Piñas became the 10th city of Metro Manila on 26 March 1997.[8] The current mayor of Las Piñas is Imelda Aguilar, wife of previous city's mayor, Vergel "Nene" Aguilar.

In 2020, the city and the entire metropolitan Manila was placed under community quarantine for one month starting 15 March due to the 2020 coronavirus pandemic.

Las Pinas is bounded to the northeast by Parañaque; to the southeast by Muntinlupa; to the west and southwest by Bacoor; and to the northwest by Manila Bay. Half of its land area is residential and the remaining half is used for commercial, industrial and institutional purposes. The present physiography of Las Piñas consists of three zones: Manila Bay, coastal margin and the Guadalupe Plateau.

The native language of Las Piñas is Tagalog, but the majority of the residents can understand and speak English.

Las Piñas, like other cities of the Philippines, is a local government unit whose powers and functions are specified by the Local Government Code of the Philippines. In general, as a city, Las Piñas is headed by a mayor who heads the city's executive function and the vice mayor who heads the city's legislative function, which is composed of twelve councilors, six each from the city's two city council districts.[9] For representation, the city is considered as one district, and therefore one representative, in the country's House of Representatives.

Additionally, like other cities and municipalities, Las Piñas is subdivided into barangays.

Las Piñas is divided into 20 barangays. These barangays are grouped into two legislative districts, each with its own set of representatives in the city council. District 1 comprises the northwestern half of the city while District 2, the remaining half. 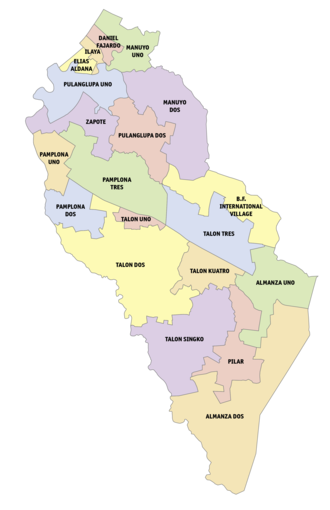 Twelve public high schools and 22 elementary schools were constructed to accommodate the growing number of the enrollees every year.

To date, there are 77 day care centers with feeding programs in 20 barangays within Las Piñas.

Las Piñas is part of the route of the extension of the LRT Line 1, the South Extension Project.[12] The actual construction officially started on Tuesday, 7 May 2019[13] because the Right-of-way is "free and clear" from obstructions. Once it is fully operational, Las Piñas will be served by the LRT Line 1 through the Las Piñas station and Zapote station.[12] Partial operation of the project will be in the end of 2021 and full operation will be in first quarter of 2024.[14] 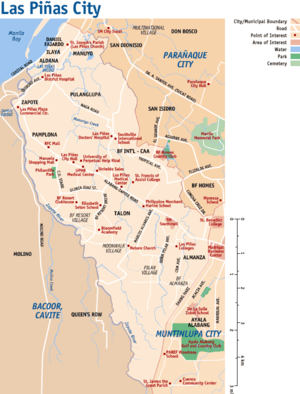 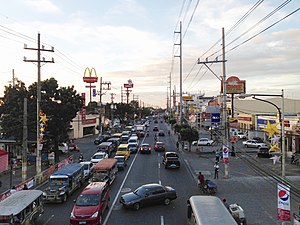 The road network of Las Piñas are radial in nature, and primarily relies on the Alabang–Zapote Road (N411), which serves as the city's road network backbone. The Manila-Cavite Expressway (formerly Coastal Road, and numbered E3), a toll expressway serves as the major traffic route towards Manila. Daang Hari, which hugs near the boundary with Muntinlupa, and the Aguinaldo Highway (N62) are the major traffic routes toward Cavite. The Muntinlupa-Cavite Expressway (MCX), that leads to South Luzon Expressway, supplements Daang Hari as an alternate to the congested Alabang-Zapote Road over Alabang and Ayala Alabang in Muntinlupa.

The Las Piñas Friendship Route network serves as the alternate routes on the congested routes, but motorists have to obtain and display a sticker on their vehicle to use these routes, as most roads of the network are located in privately owned subdivisions (gated communities), like BF Homes, Pilar Village, and BF Resort.

Jeepneys and buses form the major public transport system, and most of their routes follow the Alabang-Zapote Road. Most jeepneys through Las Piñas travel between Alabang and Zapote, within the city, or Baclaran, in Parañaque. Buses usually form routes between Alabang or SM Southmall and destinations in Manila. Buses and jeepneys are blamed for the worsening congestion on Alabang-Zapote Road.

Las Piñas is famous for its Bamboo Organ located inside the St. Joseph Parish Church in the old district of the city. Built in 1824 by a Catholic priest, Fr. Diego Cera, it is the only organ of its kind in the world with organ pipes mostly made out of bamboo.

The Las Piñas Historical Corridor Project was a program laid to restore the Old Town of Las Piñas. It was launched at the Malacañan Heroes' Hall on 13 November 1997. The project aims to educate the people of Las Piñas along the tourist corridor.[15] 19 structures were included along the historical corridor:

Las Piñas is also home to unique festivals such as: