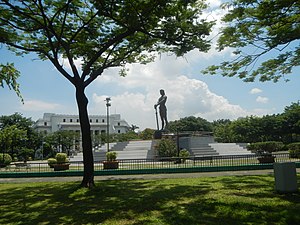 Lapulapu[1] is regarded as the first national hero of the Philippines. He was a datu or chieftain of Mactan in Cebu when the European explorers arrived in the Philippines in 1521. He was known for resisting the Spanish forces led by Portuguese Ferdinand Magellan, igniting the Battle of Mactan on 27 April 1521 and resulting in a 40-year delay of the Spanish colonization in the country.[2]

There are limited references about Lapulapu’s life, name, and origin, making the hero a major topic for research among historians. The primary source of information about Lapulapu is from the account of Antonio Pigafetta. According to Filipino historian Resil B. Mojares, there are no historical documents describing Lapulapu— on how he talked or how he looked like. There are also no accounts that tell if he even fought in the Battle of Mactan, which made him a prominent figure in Philippine history.[3]

Lapulapu’s origin is often linked to legends and folktales. In the book Glimpses in History of Early Cebu by Lina Quimat, Lapulapu was one of the sons of King Mangal, the ruler of Mat-an (or also spelled by the Spaniards Matan, Mattan, and Mauthan), and Hara Bauga. Lapulapu then married Bulacna, the daughter of Cusgan, who was the chieftain of Olanggoh Island. They had three children named Cimangtas, Savilic, and Catahuman.

Lapulapu was said to have died at the age of 80, one year before the Spanish conqueror Miguel Lopez de Legazpi arrived in the Philippines. With that, it can be estimated that Lapulapu was born in 1484.[4]

A dance-epic titled Aginid Bayok Sa Atong Tawarik (Glide On, Odes to our History) written by Jovito Abellana in 1952, narrates the origin of Lapulapu. According to the folktale, Lapulapu hailed from Borneo. He asked Humabon for a place to stay. The latter offered him Opong Island, the old name of Mactan, but Lapulapu decided to settle in Mandawili or the present-day Mandaue because it was difficult to cultivate the rocky terrain of Opong. Lapulapu flourished the trade in this place; however, according to the tale, he became a “mangatang” or pirate. He asked his men to loot those who will pass Opong Island. The trade slowed down, which caused the tension between the two chieftains.[5] [6]

One of the main discussions about Lapulapu’s history is the correct spelling of his name. “Lapulapu”, without hyphen, is the proper spelling of the hero’s name, according to the National Quincentennial Committee (NQC). The committee used Pigafetta’s account as its main reference, in which the name “Çilapulapu” or “Cilapulapu” was mentioned. According to scholars, “Ci” could pertain to the honorific of noblemen “Si.” Moreover, according to E. P. Patanñe in his book The Philippines in the 6th to 16th Centuries, it could be the natives’ version of the Hindu honorific “Sri” which also means a nobleman.[7]

Jose Rizal also mentioned the hero in his annotation of Antonio de Morga’s Sucesos de las islas Filipinas in 1890. He wrote “Si Lapulapu.”[8] In the story Aginid, the hero even had a surname and was named “Lapulapu Dimantag.”[9]

The Battle of Mactan, which happened at the dawn of 27 April 1521, is an important event in the history of the early Philippine. From Limasawa, the Portugese navigator Ferdinand Magellan went to Cebu where he met Rajah Humabon, the chieftain of Cebu island. Thereafter, Humabon and his wife were baptized to Christian names Carlos and Juana.[10] [11]

More chieftains in the island were introduced to the captain, including the ruler of Matan or Mactan, Zula. Zula ordered his son to offer two goats to Magellan and tell the captain about his promise to pay tribute. However, Datu Lapulapu opposed Magellan’s demand. Magellan then ordered his men to rush to Mactan, which flared up the skirmish between the natives and the explorers.

Despite having modern weapons, Magellan’s troops struggled to combat the warriors of Mactan. The heavy artillery of Magellan’s fleet became useless when their boats could not reach the shore because of the rocks underwater. Thus, both forces exchanged lances, spears, and arrows until Magellan fell and succumbed.[12]

Pigafetta clearly stated the details of the battle, but there was no solid evidence where exactly the battle happened. There were also no accounts if Lapulapu killed Magellan, or if the chieftain fought in the battle.[13] However, the historical documents tell us that Lapulapu stood against the threat of conquest and foreign rule.

Lapulapu’s image and name are used and depicted in monuments, banknotes and coins, and emblems. There is also a national holiday, celebrated every 27th of April, to commemorate the chieftain.

One of the major attractions in Lapu-Lapu City is the Mactan Shrine or Liberty Shrine. In this landmark stands a monument of the young warrior Lapulapu, which was erected in 1969.[14] A 30-foot bronze statue of the chieftain can also be found in Rizal Park, which was designed by the Filipino sculptor Juan Sajid Imao.[15] To celebrate the 500th anniversary of the Victory at Mactan, the National Quincentennial Committee announced the construction of Lapulapu Shrine and Museum in Lapu-Lapu City. The committee also organized a contest to design the shrine.[16] [17]

The city was also named after the chieftain by Republic Act No. 3134 in 1961, converting the municipality of Opon in Cebu Province to Lapu-Lapu City.[18] President Rodrigo Duterte signed Republic Act No. 11040 on 29 June 2018, which declares 27 April as Lapulapu Day, to honor the national hero. It is a special non-working holiday in Lapu-Lapu City in Cebu, and a special working holiday for the rest of the country.[19]

On Currency and Emblems

Lapulapu was featured in the obverse of the one-centavo coin that circulated in the 1980s. After 40 years, the country’s central bank Bangko Sentral ng Pilipinas (BSP) released a 5000-peso commemorative banknote to celebrate the victory of Filipinos in the Battle of Mactan. On its obverse depicts a portrait of the young chieftain, a scene in the Battle of Mactan, the logo of the Quincentennial Commemorations in the Philippines (QCP), and an image of Karaoka, the large outrigger warship used by native Filipinos. The reverse shows the Philippine eagle, also known as the "Manaol," which symbolizes clear vision, freedom, and strength; and also embodies the ancient Visayan belief that all living creatures originated from an eagle. This banknote also features coconut, which the native Filipinos offered to Magellan and his men; and Mount Apo in Mindanao, that guided the European explorers to locate Maluku or Spice Island.

A commemorative medal was also released along the special banknote. The obverse shows the monument of Lapulapu in Mactan Shrine, his name, and the logos of QCP and BSP. The reverse visualizes a scene in the historic battle, the marking “Battle of Mactan,” and the date “27 April 1521.” [20][21]

The Philippine National Police (PNP) also immortalizes Lapulapu in their seal and badge, which embodies leadership, courage, nationalism, self-reliance, and a people-based and people-powered community defense.[22] The Bureau of Fire Protection (BFP) also honors the chieftain through their logo, which represents bravery, leadership, and heroism.[23]

Lapu-lapu, the red grouper fish (Plectropomus leopardus), is a popular seafood served in Filipino cuisine. Cebu Representative Paz Radaza advocates to rename the fish “Pugapu” because she believes that it disrespects the name of the Mactan hero. She filed House Bill (HB) 2233 or an “Act rectifying the dishonorable use of a great Filipino name Lapu-Lapu to a fish species ‘Plectropomus Leopardus’” to support the information dissemination about this advocacy. [24]