Situated within Lanao del Norte is the highly urbanized city of Iligan, which is governed independently from the province.

The province of Lanao existed from 1914 until 1959. In 1959, Republic Act No. 222 was passed by the Philippine Congress, partitioning Lanao into two provinces: Lanao del Norte and Lanao del Sur.[1] The new province was inaugurated on July 4, with Iligan City as its capital.

The province then consisted of the municipalities of Baloi, Kauswagan, Bacolod, Maigo, Kolambugan, Tubod, Baroy, Lala, Kapatagan, Karomatan and the following municipal districts that got converted into regular municipalities of Matungao, Pantao Ragat, Munai, Tangcal, and Nunungan.

In 1977, President Ferdinand E. Marcos signed Resolution No. 805, s. 1977 of the Sangguniang Panlalawigan (Parliamentary Bill No. 586) sponsored by Assemblyman Abdullah D. Dimaporo, into Presidential Decree 181 transferring the province's capital from Iligan City to the municipality of Tubod.

In October 1984, inaugural ceremonies were held to celebrate the occasion of the transfer of the Provincial Capitol from Poblacion, Tubod to the Don Mariano Marcos Government Center (now Governor Arsenio A. Quibranza Provincial Government Center) at Pigcarangan, in Tubod.

Lanao del Norte is a rugged province that ranges from the coastal shorelines in the north to the high plateaus and mountains in the south. It has also diverse flora and fauna. 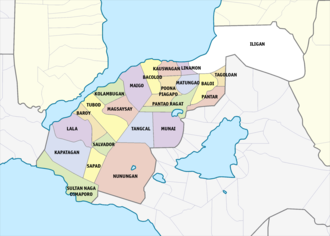 The people in Lanao del Norte are a mixture of Maranaos and Cebuanos, with some Zamboangueños, Tausugs, Yakan, and Sama-Bajau. Historically, immigrants who came from the Christian provinces of Mindanao, Visayas and Luzon tended to settle in the northern part of Lanao while the Maranaos inhabited the south. There are also a minority of Higaonons settling in the hinterlands of Iligan.

The Maranao had settled in the area long before the arrival of the Spaniards in the Philippines. Like other groups, they possess their own culture which makes them quite unique. Their language, customs, traditions, religion, social system, costumes, music, and other features are factors that make Lanao peculiar and distinct from other Philippine provinces.

The main languages are Maranao and Cebuano, with the latter being the native language of majority of the citizens of the province. Aside from this, Filipino (Tagalog) and English are understood and spoken.

According to the Philippine Statistics Authority (PSA) report in 2015, 44.19% of the population of Lanao del Norte were adherents of Islam [7](predominantly Sunnites). Other sizeable Islamic sects are Ahmadiya, Sufism, Shia etc. Other religions include different sects of Christianity, Buddhism and other beliefs.

Salvador T. Lluch was the first Governor of Lanao del Norte. Second was Mohammad Ali Dimaporo, from January 1960 to September 1965 when Governor Dimaporo ran and won the congressional seat of the province. By operation of the law of succession, Vice Governor Arsenio A. Quibranza became the third Provincial Chief Executive of the province. By the mandate of the inhabitants, Governor Quibranza was elected Governor in 1967 and almost unanimously re-elected in 1971 and again in 1980.[10][11]

By virtue of the power and impact of the People Power Revolution at EDSA, Manila on February 25, 1986, local government all over the Philippines changed the political atmosphere overnight. Lanao del Norte became one among the many provinces affected by the sudden changes brought by the "Snap Election" in February 1986. Local heads of offices and employees particularly those holding political positions were destabilized but with the installation of President Corazon Aquino as president, OIC Atty. Francisco L. Abalos became the appointed governor of the province on March 3, 1986. On February 2, 1988, Atty. Abalos was elected as governor of the province.

In the Synchronized National Election of May 11, 1992, Congressman Abdullah D. Dimaporo, a legislator and economist, was elected Provincial Governor. The Provincial government embarked on a comprehensive planning and set the groundwork for the development of the province.

In the 1998 national and local elections, Imelda Quibranza-Dimaporo, wife of Governor Abdullah. D. Dimaporo was elected as Provincial Governor until 2007.