The city is bounded on the east by the municipality of Tuburan, on the south by Tipo-Tipo, on the west by Isabela and on the north by Basilan Strait.

On July 2016, the Basilan provincial government broke ground for the construction of the new provincial capitol inside the defunct 4,000-hectare University of the Philippines (UP) Land Grant in Barangay Santa Clara.[1]

Template:Stack The terrain is relatively plain along the coastal areas and hilly in some areas. The urban area is Template:Convert above sea level and gently sloping to Template:Convert toward the hinterlands.

Lamitan is politically subdivided into 45 barangays.

The climatic condition is the same with other areas in the entire Basilan Island. It has a "D" type of climate and rainfall is evenly distributed throughout the year. 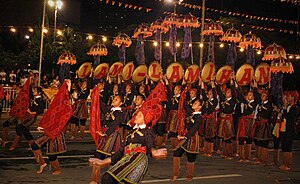 Datu Kalun Shrine – Built as a tribute to a famous Yakan leader and founder of Lamitan. His descendants are the Antonio-Cuevas-Pamaran clan.

Museum of Lamitan – Showcases the color and highlights of the Lami-lamihan festival. It also serves as the information center for the development of this town.

Lamitan is home to one (1) state college and three (3) private colleges. The Basilan State College is an extension college of the main SUC in Isabela. The three HEIs are the Mindanao Autonomous College, the Mariam School of Nursing and Furigay Colleges, Inc. (FCI).

The Mariam School of Nursing was established in 2004 as part of its Chairwoman's educational outreach program and was named Mariam or Mother Mary - a unifying and guiding figure among the Christians and Muslims. Also offers 11 Tesda Qualifications for National Certificates.