La Solidaridad was the name of the all-Filipino organization established by the illustrados of Barcelona on 13 December 1888, which sought to create Filipino representation in the Spanish Cortes. It was also the name of the official publication of the organisation.

Galicano Apacible was the first president of the La Solidaridad. With him were Graciano Lopez Jaena as vice-president, Mariano Ponce as treasurer, and José Rizal, who was then in London, as Honorary President. Apacible did not remain long enough as president since could not hold the bickering reformists together anymore. What the organisation needed were people like Rizal and Marcelo H. del Pilar who could reunite the sentiments of the Filipinos in Spain.

La Solidaridad was viewed as a rival organization for Miguel Morayta's Spanish Orient Lodge of Freemasonry. Later, the two organizations collaborated in their petition to the Minister of Colonies. Their petition were as follows:

The usage of Spanish language in their articles and columns that was unfamiliar to the Filipino people was one of the factors that limited their influence, plus the controlled flow of the reading material endangered the very existence of the publication.

But La Solidaridad reached local ilustrados and lead revolutionary forces nevertheless. The attempts of Spanish rule for La Solidaridad gave more emphasis to the lack of freedom the propagandists were campaigning for. Since the propagandists wrote accurate issues about the society, empathy was given by the readers. The oppression felt by the people ignited and set forth the continuity of reformation by any means possible during those dark times. 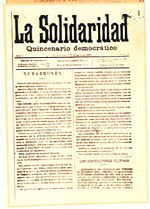 Soon enough, on 15 February 1889, through Jaena, the La Solidaridad newspaper was created. It served as the principal organ of the Propaganda Movement for over five years, with its last issue released on 15 November 1895. To quote the editorial in the the first issue of La Solidaridad:

The Solidaridad became successful through the contributions of Filipino writers in Barcelona, namely:

Some friends of the Propaganda Movement also contributed, notably

Due to insufficiency of funds, La Solidaridad stopped its circulation on 15 November 1895. In del Pilar's farewell editorial, he said :

We are persuaded that no sacrifices are too little to win the rights and the liberty of a nation that is oppressed by slavery.