It is the capital of the province of South Cotabato and regional administrative center of Soccsksargen (Region XII).[1]

Koronadal City is one of the Planned Cities of the Philippines that were signed by congress on 1965. It became a component city of South Cotabato by virtue of Republic Act 8803 dated October 8, 2000.[2]

Koronadal City is one of the two cities in Mindanao where majority of the citizens are ethnic Hiligaynons, who comprise 95% of the city's population, the other being Tacurong City, Sultan Kudarat.[2] In 2003 and 2005 the city was recognized as "Most Competitive City" in the small-city category, and in 2005 and 2006 as the most business friendly city in Mindanao.[2]

The settlement of Koronadal and its creation as a municipality by virtue of Executive Order No. #82 dated August 18, 1947 was marked by a rapid initial development, so that when the province of South Cotabato was created under Republic Act No. 4849 on July 18, 1966, it easily became the capital town. In the past, the place was populated by Blaan people and Maguindanaos. The word Koronadal is believed to have been derived from two Blaan words- kalon meaning cogon grass, and nadal or datal meaning plain, which aptly described the place to the natives.[3] On the other hand, Marbel, which is another name for the poblacion, is a Blaan term marb el which means "murky waters" referring to a river, now called the Marbel River.

It was on August 18, 1947 when President Manuel Roxas signed the Executive Order creating the municipalities in the entire province of Cotabato, one of which was Marbel (now Koronadal). The same executive order likewise mandated the official function of the municipal government which began after the qualification and election of the first set of municipal officials.

The municipal government of Koronadal began its official function on January 1, 1948 with an approved Annual Estimated Budget of P30,000.00. The land area of the municipality by then was comparable with the Province of Bata-an embracing the present municipalities of Tampakan, Tupi, Banga, Lake Sebu, Surallah, T'boli, South Cotabato, Santo Niño, Norala, and Isulan.

Municipal Council Resolution No. 32, Series of 1948 mandated and proclaimed January 10 of each year as the Municipal Town Fiesta commemorating the foundation of Marbel Settlement District of the National Land Settlement.

Koronadal was converted into a component city of South Cotabato, now officially known as the City of Koronadal by virtue of Republic Act 8803 on October 8, 2000. At present, Koronadal City is a fast-developing growth center composed of twenty-seven barangays including the four zones in the poblacion. Being the capital city of South Cotabato, it is the center of the province in terms of political, cultural and socio-economic activities.

By virtue of Executive Order No. 304 signed by then President Gloria Macapagal-Arroyo, Koronadal City was named as the Regional political and socio-economic center of Soccsksargen on March 30, 2004. Regional departments, bureaus and offices were ordered to move from Cotabato City, the former Regional Center of the Region.[1]

Koronadal is located in the central part of southern Mindanao, in a gently sloping plain surrounded by low mountains.[4]

Koronadal City is politically subdivided into twenty-seven Barangays with four zones in the Poblacion area. Eight of which are on the Urban area while the remaining nineteen are located on the Rural area.

The climate of Koronadal is mild and sub-tropical, belonging to climate Type IV. The place is typhoon free. Rainy months are from June to October.[4]

The main language of the city is Hiligaynon. Tagalog, Ilocano and Cebuano are also widely spoken. While Maranao, English, and Arabic are also heard in the city.[5]

Churches and Mosques in Koronadal: Template:Columns-list 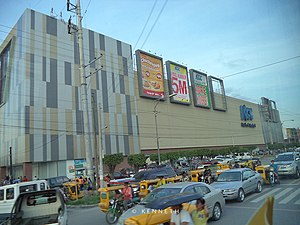 Home for many shopping malls in South Cotabato, it serves as one of the tourism economic activity of the city. Koronadal is considered as the main shopping hub for nearby municipalities and provinces.

Koronadal became a city on October 8, 2000. Since then the City Government of Koronadal has been in charge of the political, socio-cultural and economic development of the city.

The B'laan people are one of the indigenous peoples of the Southern Philippine island of Mindanao. Another tribe called the Maguindanao also inhabits the same area. The two tribes consider themselves to be brothers and sisters. Long ago, an Arab male (ancestral brother) married a B'laan female (ancestral sister) and through this marriage union, Islam infiltrated Southern Mindanao so that when the Spaniards arrived, their attempts to establish Catholicism were unsuccessful in the south. Eventually the B'laan and the Maguindanao became trade partners with the B'laan settling in the mountains and the Maguindanao settling along the coastal areas. From that time until now, the B'laans have been producing rice, vegetables, livestock, and rainforest products. The original religion of the Blaan is Animist. Presently, only 5% of the 8,000 B'laan tribal people are considered to be evangelical.

The Catholic Filipinos make up the great majority (over 70%) of the Southern Philippine population. They are relatively newcomers to the area; the first wave of Christian migrants came in the seventeenth century when the Spaniards sought to populate Zamboanga, Jolo, Dapitan and other areas by encouraging people from Luzon and the Visayas to settle there. In the nineteenth century Spanish policy found considerable success in encouraging migrations to Iligan and Cotabato.

The Americans continued this pattern during their colonial administration. In 1913 the American colonial government provided resources for the establishment of agricultural colonies in Mindanao. By the time the Philippine Commonwealth was established, Mindanao had become a veritable frontier. Wave upon wave of migrants poured into the region, chiefly among them the Hiligaynons, Cebuanos, Ilocanos, and Kapampangans. These people did much to clear the virgin areas of Mindanao and open them to extensive agriculture and industry.

The cultural diversity of the region is the result of a large influx of migrants from the north over a long period of the region's history. Found here are three main cultural groups: the early Filipinos who belong to various indigenous tribes living in the highlands and remote areas of Mindanao, the Muslim Filipinos who were early converts to Islam and who regard the region as their traditional homeland, and the Catholic Filipinos who founded settlements and communities in the course of their migrations from other parts of the country.

Koronadal also hosted an international activity called Pyesta Kalon Datal: Koronadal International Folkloric Festival in coordination with Conseil international des organisations de festivals de folklore et d'arts traditionnels or the International Council of Organizations of Folklore Festivals and Folk Art (CIOFF) last August 10 to 18, 2015[6] and August 11 to 18, 2018[7] and several national activities such as the Palarong Pambansa in 1996 with General Santos and solo in 2007, Mindanao Business Forum, and National Schools Press Conference. On June 12, 2009, President Gloria Macapagal-Arroyo together with Defense Secretary Gibo Teodoro celebrated the 111th Independence Day in the city, which marks a significant and historic event in the history of Koronadal.

Health Facilities in Koronadal are also widely distributed to all Marbeleños.

Hospitals in the City of Koronadal:

There are two universities in the city:

While other colleges are also vibrant in the education business. The list below shows the tertiary level schools present in the city: Template:Columns-list

The list below shows some prominent secondary and elementary schools present in the city: Template:Columns-list

Koronadal is also home to one seminary, the Our Lady of Perpetual Help Seminary or locally known as OLPHS.