The Kapampangan people (Template:Lang-pam), Pampangueños or Pampangos, are the sixth largest ethnolinguistic group in the Philippines, numbering about 2,784,526 in 2010.[1] They live mainly in the provinces of Pampanga, Bataan and Tarlac, as well as Bulacan, Nueva Ecija and Zambales. 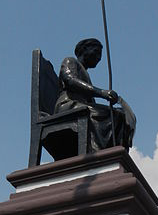 Tarik Sulayman, a prominent Kapampangan leader from Macabebe who fought against the Spanish in the Battle of Bangkusay Channel in June 1571.

The Kapampangans have produced many Rajahs, Datus, four Philippine presidents, three chief justices, a senate president, the first Filipino cardinal, one Huk Supremo, many Huk Commanders and NPA cadres and many notable figures in public service, education, diplomacy, journalism, the arts and sciences, entertainment and business. 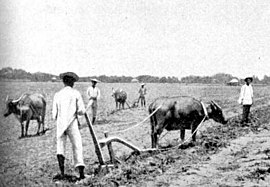 The oldest artifact ever found in the Province of Pampanga is a 5000-year-old stone adze found in Candaba. It is said to be a tool used in building boats. Earthenware and tradeware dating back to 1500 BC have also been found in Candaba and Porac.[5] Farming and fishing were the main industries of the Kapampangan people.

Kapampangans have played a dynamic yet conflicting role in Philippine history. It was the Kapampangans of Macabebe who were formerly Muslim were the first to defend the Luzon Empire from Spanish domination in 1571.[6] Yet it was the Kapampangans that the Spaniards relied on to defend their new colony from the Dutch. It was at this time that "one Castillan plus three Kapampangans" were considered as "four Castillans" as long they gallantly served in the colonial armed forces. Such behaviour earned them the stereotype of being quislings in exchange for personal wealth and self-aggrandisement all throughout the archipelago.[6] After their successful battle against the Dutch in 1640, only Kapampangans were allowed to study side by side with the Spaniards in exclusive Spanish academies and universities in Manila, by order of Governor-General Sebastián Hurtado de Corcuera.[3] In 1896, Kapampangans were one of the principal ethnic groups to push and fuel the Philippine revolution against Spain. Yet it was also the Kapampangans of Macabebe that fiercely defended the last Spanish garrison against the revolutionaries.

Many Kapampangans joined a group of stronghold soldiers that survived the invasion and officially trained under the 31st Infantry Division, Philippine Commonwealth Army. USAFFE was stationed in Pampanga on July 26, 1941 before the surrender by the Japanese to April 9, 1942. After the Battle of Bataan in 1942, some Kapampangan soldiers of the USAFFE 31st Infantry Division fought four years of battles against Japanese troops. After the fall of Bataan on April 9, 1942, many Kapampangan soldiers of the USAFFE 31st Division surrendered to the Japanese and then participated in the Bataan Death March from Mariveles, Bataan to Capas, Tarlac.

Many Kapampangans joined the guerrilla resistance fighters of the Hukbalahap Communist resistance. Many Kapampangan guerrillas and Hukbalahap communist groups fought for more than three years of insurgency during the Japanese Occupation and also fought side by side with allied forces in the main province of Pampanga, helping local troops of the Philippine Commonwealth Army and incoming Philippine Constabulary 3rd Constabulary Regiments stationed at the general headquarters in Pampanga in operations in Central Luzon from 1942 to 1945 against the Imperial Japanese troops. 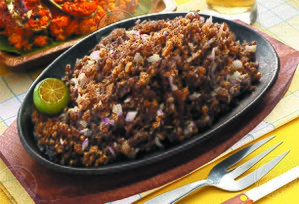 Many Kapampangan festivals display an indigenous flavor unique only to the Kapampangan people. Consider the Curaldal or "street dancing" that accompanies the Feast of Santa Lucia in Sasmuan or the Aguman Sanduk were men cross-dress as women to welcome the New Year in Minalin or the Batalla Festival to re-enact the battle between the native Muslim Moor and the new colonist Native Capampangan Christians, the historical battle between the two religious native Kapampangans. They start the battle in Ugtung-aldo or afternoon and they end it in Sisilim or sunset with the tune of what Macabebeanons and Masantuleñios called BATTALA Masantol, Macabebe and Lubao.

The Pistang Danum of the barrios of Pansinao, Mandasig, Lanang and Pasig in Candaba, where food is served on floating banana rafts on the waters of the Pampanga River was originally a non-Christian holiday that is now made to coincide with the baptism of Christ. The Kapampangan New Year or Bayung Banwa that welcomes the coming of the monsoons and the start of the planting season is made to coincide with the feast of John the Baptist. The colourful Apung Iru fluvial procession of Apalit, once a thanksgiving celebration in honour of the river, has become the feast of Saint Peter.

The most dramatic festivals can be witnessed during the Mal ay Aldo, which is the Kapampangan expression of the Holy Week. These include the erection of a temporary shrine known as the puni where the pasion or the story of Christ's suffering is chanted in archaic Kapampangan. The melody of the Kapampangan pasion was said to have been taken from their traditional epic, whose original words were lost and replaced by the story of Christ. The highlight of the Mal ay Aldo celebration is the procession of the magdarame or sasalibatbat penitents covered in blood from self-flagellation. Some of them even have themselves crucified every Good Friday at the dried up swamp of barrio Cutud in San Fernando.

Kapampangan cuisine, or Lutung Kapampangan, has gained a favourable reputation among other Philippine ethnic groups, which hailed Pampanga as the "Culinary Capital of the Philippines". Some popular Kapampangan dishes that have become mainstays across the country include sisig, kare-kare, tocino or pindang and their native version of the longaniza.

The Kapampangan people have a complex, distinct religion filled with various divinities even prior to the introduction of Roman Catholicism. 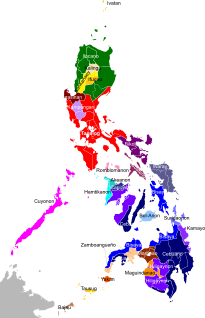 The Kapampangans are shown in lavender in this map.

Kapampangans are mostly Christians, a majority of which are Roman Catholics, Aglipay, Methodists, and The Church of Jesus Christ of Latter-day Saints (LDS Church). A few belong to non-Christian religions. However, traces of native-Austronesian Anitism, Hinduism, Buddhism, and Islam can still be found among their folk practices and traditions, as these were the majority beliefs of the Kapampangan before the coming of Christianity in the 16th century.

For a list of prominent or noteworthy Kapampangans, see Category:Kapampangan people.