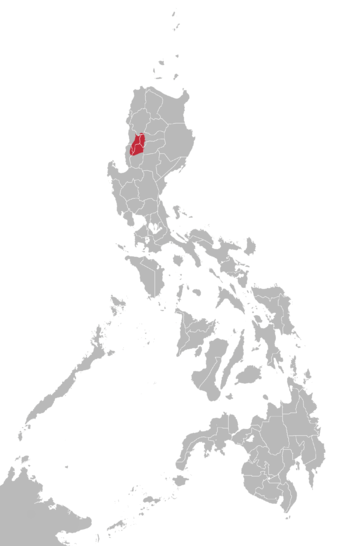 The Kankanaey people are an Indigenous peoples of the Northern Philippines. They are part of the collective group of indigenous people known as the Igorot people.

Recent DNA studies show that the Kankanaey along with the Atayal people of Taiwan, were most probably among the original ancestors of the Lapita people and modern Polynesians.[3][4][5] They might even reflect a better genetic match to the original Austronesian mariners than the aboriginal Taiwanese, as the latter were influenced by more recent migrations to Taiwan, whereas the Kankanaey are thought to have remained an isolated relict population.[6]

Like most Igorot ethnic groups, the Kankanaey built sloping terraces to maximize farm space in the rugged terrain of the Cordillera Administrative Region.

Two famous institutions of the Kankanaey of Mountain Province are the dap-ay, the men's dormitory and civic center, and the ebgan, the girls' dormitory.[7][8]

The Bontoc Igorot in Sagada and some nearby pueblos, as Takong and Agawa, the o′-lâg is said to be called Ĭf-gan′Template:Confusing-inline.

The hard-speaking Kankanaey women's dress is composed of mainly red and black with a little white styles, as for the skirt or tapis which is mostly called bakget and gatengTemplate:Confusing-inline. The men wore a G-string as it is called but it is known as wanes to the Kankanaeys of Besao and Sagada. The design of the wanes may vary according to social status or municipality.

The Kankanaey's major dances include tayaw, pattong and balangbang. The tayaw is a community dance that is usually performed at weddings; it may be also danced by the Ibaloi people but has a different style. Pattong is also a community dance from Mountain Province which every municipality has its own style. Balangbang is the modern word for Pattong. There are also some other dances that the Kankanaeys dance, such as the sakkuting, pinanyuan (wedding dance) and bogi-bogi (courtship dance). Kankanaey houses are built like the other Igorot houses, which reflect their social status.

The name Kankanaey came from the language which they speak. The only difference among the Kankanaey are the way they speak like intonation and the usage of some words.

In intonation, there is a hard-(Applai) and soft- speaking Kankanaeys. Speakers of hard Kankanaey are from Sagada, Besao and the surrounding parts or barrios of the said municipalities. They speak Kankanaey with hard intonation and they differ in some words from the soft-speaking Kankanaey.

The soft-speaking Kankanaeys come from Northern and some parts of Benguet and from the municipalities of Sabangan, Tadian and Bauko in Mountain Province.

In words, for example, an Applai might say otik or beteg (pig) and the soft-speaking Kankanaey may say busaang or beteg as well. The Kankanaeys may also differ in some words like egay or aga, maid or maga. They also differ in their way of living.