A kalis is a type of double-edged Filipino sword, often with a "wavy" section, similar to a keris. Just like the keris, the kalis's double-edged blade can be used for both cutting and thrusting; except that the kalis is much larger than most keris, making it a sword rather than a dagger.

This weapon was featured in the American bladesmithing competition, Forged in Fire (TV series)'s season 1 episode 8.[2]

It is believed that the predecessor of the kalis, the keris, first appeared in the 13th century, originally from the island of Java in Indonesia. From there the keris migrated to the Philippines where it evolved into the kalis.

All the Filipino types of kalis swords are both larger and heavier than those from Indonesia. Although it is considered to be a slashing weapon, the kalis can be effectively used for thrusts and stabs. The larger kalis was introduced back to Indonesia, especially in Kalimantan and Sulawesi, where it is known as sundang, sondang or keris Sulu (not to be confused with the súndang, another native Philippine sword from the Visayas).[3]

The kalis blade is defined as one that is wide on the base and double-edged. It is capable of delivering both chopping and slicing cuts. While many assume the traditional form of the kalis is the fully wavy blade, the half-waved half-straight, as well as the fully straight blades, are equally if not more common, as straight blades were more practical in combat. Moro kalis blades generally range in size from 18 to 26 inches (46 to 66 cm), though as with all Moro weapons there are exceptions. Generally however, the larger blades are found on later pieces, while the oldest Moro kalis tend to be of smaller stature. Damascene patterning is sometimes evident though often not as controlled as seen in the complex pattern welding of the smaller Malay keris.

The demarcation line indicating the separate gangya (guard) can be seen.

The gangya (guard) of a kalis blade is made in such a manner that their lines flow very elegantly into the blade, never interrupting in continuity from transition from gangya proper to blade. Antique kalis (kalis made before 1930) were made with a separate gangya (guard) like their Malay cousins, while more modern made kalis lack this feature and have gangya that are in fact integral to the blade. Some newer kalis do have an engraved line to simulate the appearance of a separate gangya, but when inspected closely it is evident that this is only a cosmetic engraved line, and not a true separate gangya. At some point near the early 19th century, gangya started to be made with a distinct 45-degree angle near the terminus. Opposite the hook-like fretwork on the gangya, exists a curved cavity. It has been suggested that this cavity is representative of the trunk of an elephant, others contend that it is the mouth of the naga (serpent) with the blade being the tail, and still others contend that it is in fact the open mouth of an eagle.

Two Filipino swords, a kampilan (longer) and a kalis (shorter), photographed side by side to demonstrate their size relative to each other.

Modern tourist kalis blades can be distinguished by a number of features that once identified are quite easy to spot. Perhaps the easiest to identify feature of a modern tourist/fake kalis blade are the shaping of the waves. Traditional kalis feature gracefully undulating waves that are forged deep into the blade to penetrate straight to the centerline of the blade. Tourist kalis, on the other hand, feature shallow angular waves, that appear to be cut out of the steel rather than forged into the blade.

This example of a non-ornate pommel and simple hilt, wrapped in lacquered fiber for improved grip, is a style of kalis typically used by Moro warriors.

The hilt is either straight or slightly curved (most common on cockatoo (kakatua) pommel hilts). Pommel variations are many, however the most common are the horse-hoof (the most distinctive variation coming from the Sulu Sultanate) and the cockatoo. Commonly the pommel is made of beautiful hardwood burl (such as banati) with the hilt being wrapped in a lacquered natural fiber (such as jute). However, on higher end kalis, belonging to the upper class, the pommel would be made of such exotic materials as ivory, silver plating, solid brass, etc. with hilts often lavishly bound with silver or swasaa (an alloyed mixture of gold similar to red-gold) bands frequently with braided silver wire interspersing the chased bands. 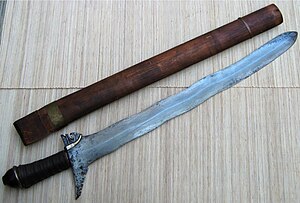 An example of a simple scabbard made of two loose pieces of wood, secured together by loops of brass.

The Moro kalis scabbard shares many common characteristics with their Malay cousins, but are unique in their own style and form. Scabbards tended to be made of wide grain native hardwoods (e.g. mahogany, teak, narra, etc.), and lashed together with rattan bindings. Sometimes the cross-piece is a separate piece, with the tail-piece socketed in, but quite often the cross-piece and tail are made of one board. Older scabbards feature wider rattan lashings, and normally only cover small sections (e.g. bottom 1/3, 4 inch bands, etc.) of the scabbard.

Kalis blades are wide at the base, double-edged, and can be waved, half-waved half-straight, or straight.

Other keris-derived weapons in the Philippines include the balasiong sword and the punyal (or gunong) daggers.