Kalamay (also spelled Calamay, literally "sugar"), is a sticky sweet delicacy that is popular in many regions of the Philippines. It is made of coconut milk, brown sugar, and ground glutinous rice. It can also be flavored with margarine, peanut butter, or vanilla. Kalamay can be eaten alone but is usually used as a sweetener for a number of Filipino desserts and beverages.

Kalamay is made by extracting coconut milk from grated coconuts twice. Glutinous rice is added to the first batch of coconut milk and the mixture is ground into a paste. Brown sugar is added to the second batch of coconut milk and boiled for several hours to make latík. The mixture of ground glutinous rice and coconut milk is then poured into the latík and stirred until the consistency becomes very thick. It can be served hot or at room temperature especially when eaten with other dishes. Viscous Kalamay are often served cooled to make it less runny and easier to eat.

Kalamay is a popular pasalubong (the Filipino tradition of a homecoming gift). They are often eaten alone, directly from the packaging.[1] Kalamay is also used in a variety of traditional Filipino dishes as a sweetener,[2] including the suman and the bukayo. It can also be added to beverages like coffee, milk, or hot chocolate.

Biko and sinukmani are similar dishes which use whole glutinous rice grains. The preparation is the same except that the glutinous rice is first cooked whole and not ground into a paste, and then is smothered with the latík. In some regions (particularly in the Northern Philippines), this dish is referred to as the kalamay, with the viscous kind differentiated as the kalamay-hati.

The latík from kalamay by itself can be used with other desserts, particularly with dishes made from cassava (which is then referred to as 'cassava kalamay'). Kalamay is also commonly confused with matamis sa bao, a similar viscous dish. However, the latter does not use rice. 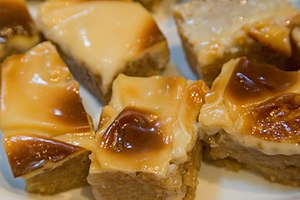 There are many variations and types of kalamay. Kalamay can be divided roughly into two types: the syrupy kind used in conjunction with other dishes (higher latik ratio), and the gummy chewy kind which is more expensive and usually eaten on its own.[1]

Similar to other traditional kakanin rice cakes, kalamay also has variants based on secondary ingredients, they include:[7]

Kalamay, in many Visayan languages (particularly Hiligaynon), is synonymous with 'sugar' (extracted from sugarcane).[13] The word is usually elided to kamay in modern Cebuano dialects. In the Waray language, kalamay refers to a hardened cake of molasses used as sweeteners for many cooked desserts. Its production has been known since the Spanish colonization of the Philippines.

A cousin of kalamay is dodol, found in Indonesia, Malaysia, Brunei, Singapore and in some parts of the Philippines. It uses similar basic ingredients and preparation. Dodol, however, is a solid candy, unlike the liquid kalamay. Kalamay is visually similar to the Chinese nian gao (also known as tikoy in the Philippines), but they are not related.