Kaamulan Festival is an ethnic cultural festival held annually in Malaybalay City, Bukidnon in the Philippines from the second half of February to March 10, the anniversary date of the foundation of Bukidnon as a province in 1917. It is held to celebrate the culture and tradition of the seven ethnic tribal groups—Bukidnon, Higaonon, Talaandig, Manobo, Matigsalug, Tigwahanon and Umayamnon—that originally inhabit the province.[1][2] It is the only authentic ethnic festival in the Philippines.[3]

Kaamulan comes from the Binukid word “amul” meaning to gather.[4] Kaamulan is gathering for a purpose—a datuship ritual, a wedding ceremony, a thanksgiving festival during harvest time, a peace pact, or all of these together.[5]

Kaamulan started as a festival on May 15, 1974,[4] during the fiesta celebration of the then municipality of Malaybalay. A town official thought of inviting some indigenous people to town and made them perform a few dance steps at Plaza Rizal to enliven the fiesta celebration.[6] The celebration however proved very popular and together with national coverage the Kaamulan festival has become the regional festival of Northern Mindanao, as declared by the Regional Development Council of Region 10 on September 16, 1977.[7] Kaamulan was formerly held in the first week of September but in 1996, it was transferred to the present date to synchronize it with the foundation celebration of the province until in 2014 it was moved to the month of August in light of the 100th Founding Anniversary of Bukidnon. The festival was cited for having a great potential to be included in the UNESCO Intangible Cultural Heritage Lists.[8] 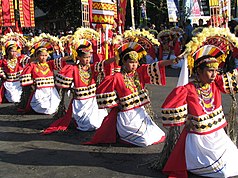 Street dancing, one of the main events during the Kaamulan Festival

The Seven Tribes Of Bukidnon

The typical Indigenous People of this Province are broadly identified into two ethnical origins namely: the Bukidnon and the Manobo. The Bukideño have distinct physical characteristics whom may be describe as with slight build bodies, slanting eyelets, relatively high noses with lips that ranges from medium and brown to light skin color. They speak binukid, which is distinctive with up and down tone unlike other dialects. While the Manobo is a Negrito mixture and resembles to have small bodies, dark skin, curly hair with broad to flat noses. Socially, the so-called Bukidnon live in the relative flatlands of the Bukidnon plateau and have already adopted Christian ways and utilized modern technology while the Manobos live in the mountains and do not want to mingle with the Christians and other people. It is believed that Bukidnon have a more advanced stage of development and who have developed their own culture and traditions.Template:Citation needed

The Bukidnon tribes were classified as lowlands and socially acculturated Christians adopting modern technology through educational enhancement. These are the following: