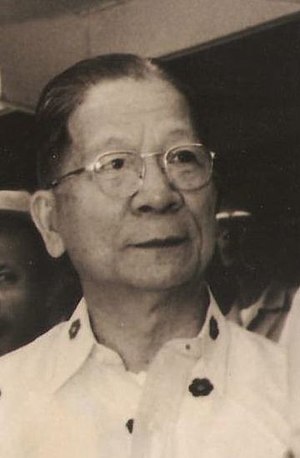 Juan Sumulong y Marquez (27 December 1874 – 9 January 1942) was a Filipino revolutionary, journalist, lawyer, educator. and politician from Rizal province. He was dubbed as the “Brains of the Opposition.”

Sumulong was born in Antipolo, Rizal (then known as Morong under the regime of the Spanish Empire). After finishing primary education in his hometown, he went to Colegio San Juan de Letran in Manila and graduated with a Bachelor of Arts degree.

During his college years, he had to walk each day from his residence at Tondo to his school in Intramuros. As he was not able to afford paying his room rent, he helped his landlady prepare food for breakfast while peddling her homemade cigars after school. He also did his own laundry; and during rainy days, he wore wooden clogs and only upon reaching school he would wear his leather shoes which he carried wrapper in paper.

Later on, Sumulong took up law at the University of Santo Tomas.

During the revolution era against Spain, Sumulong joined the revolutionists headquartered in Morong. And after the restoration of peace following the Filipino-American War, he served as a private secretary to the Filipino civil governor of the province.

Sumulong later became a journalist after joining La Patria as a reporter and a city editor after three months. He also became the editor for the Federal Party's official publication La Democracia.

In 1901, Sumulong passed the bar examinations. He practiced law and at the same time taught Constitutional Law at the Escuela de Derecho; wherein he handled various cases such as a boundary dispute between Cainta and Antipolo, libel suit by the American Constabulary officials against El Renacimiento, and others.

Sumulong was made Judge of the First Court Instance in 1906, and of the Land Registration in 1908. He was also a member of the Philippine Commission from 1909 to 1913. He was once offered for a position in Supreme Court by then-US President William Howard Taft, but he declined.

On 2 January 1907, the Partido Nacional Progresista was established, and named Sumulong its vice president. He ran for the Philippine Assembly elections in June 30, but he lost. In the 1916 general elections, he ran again for the senator of the fourth district.

In 1919, two years after the merging of the minor groups, the Progresista and Democracia Nacional parties, Sumulong became the president of the newly-formed Democrata Party.

In 1925, Sumulong was elected as the senator of fourth district, composed of Manila, Rizal, Laguna, and Bataan.

On 2 June 1931, Sumulong resigned from the presidency of the Democrata Party; citing his poor health as the reason.

Three years later, in the 1934 general elections, Sumulong won after running for Senator of the fourth senatorial district, as a candidate of the Antis.

Seven years later, he ran against Quezon for presidency in spite of failing health.

On 9 January 1942, after weeks of being bed-ridden due to failing health, Sumulong passed away. He was 66 years old. He was survived by his wife Maria Salome Sumulong. The couple had 11 children, four of whom died.

In his honor, in 1960, a highway connecting the cities of Marikina, Antipolo, and municipalities of Teresa and Morong, were constructed.

Also, a set of secondary schools, was named after him.