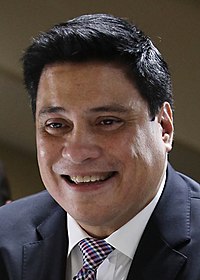 He is married to Audrey Zubiri. They have three children: Maria Adriana, Juan Miguel Jr., and Santiago Gabriel.

He was born on 13 April 1969 in Makati City to a Negrense father of Spanish Basque heritage, Jose Maria Rubin Zubiri Jr, and to a Bicolana mother, Maria Victoria Ocampo Fernandez-Zubiri. His father is the provincial Governor of Bukidnon.

Zubiri, who maintains a residence in Bukidnon, speaks Cebuano, Tagalog, and English.

He finished his primary and secondary education at Colegio de San Agustin-Makati. He graduated with a degree in Bachelor of Science in Agribusiness Management from the University of the Philippines Los Baños (UPLB). He also earned a Master of Environment and Natural Resources Management degree from the UP Open University. He was conferred with an Honorary Fellowship by the Royal Institution of Singapore in 2018.

He served as Chief of Staff of his father, then Representative (now Bukidnon Governor) Jose Maria Zubiri Jr. from 1995 to 1998.

He was elected as Representative of the 3rd District of Bukidnon in 1998. On his first term, he was one of the members of what the media dubbed as the “Spice Boys,” a group of neophyte and two-term congressmen who were openly critical of then President Joseph Estrada’s administration. He was reelected to the [[House of Representatives in 2001 and 2004.

In the final tally for the 2007 midterm elections, Zubiri narrowly defeated Koko Pimentel for the 12th and last slot in the Senate. Zubiri had 11,001,730 votes against Pimentel’s 10,983,358 votes. The margin of the votes was strongly contested, particularly the votes from Maguindanao, where Pimentel had lost to Zubiri by a landslide. As Pimentel claimed that the votes in Maguindanao were tainted, he petitioned the Supreme Court (SC) to invalidate the votes there. The SC allowed the Commission on Elections (COMELEC) to count the votes in Zubiri’s favor. Pimentel returned to SC again and petitioned the justices to issue a restraining order against Zubiri’s proclamation. On 14 July 2017, Zubiri was proclaimed elected to the Senate. Pimentel then brought his poll protests to the Senate Electoral Tribunal. In March 2018, SC dismissed Pimentel’s petition to stop the COMELEC from canvassing the votes from Maguindanao.

As a Senator, Zubiri advocated for a more in-depth study of biofuels in order to prevent food shortages and allowed the current production of alternative clean energy and biofuels to lessen dependence on imported oil and allow the Philippine economy a new avenue of economic success. He became Senate Majority Leader in the 14th Congress.

During his privilege speech on the floor in the Senate in August 2011, Zubiri announced his resignation as he and his family were hurt by the “unfounded” accusations against him on the alleged electoral fraud.

He was reelected as Senator in 2016 and in 2018. Among the laws Zubiri has sponsored, authored, or co-authored across his time in both houses of Congress are:

Zubiri filed his certificate of candidacy (COC) for Senator in the 2022 elections on 6 October 2021. He is running as an independent bet, but has been adopted by the slate of Tito Sotto III and Panfilo Lacson. He is also supported by the PDP-Laban faction led by Manny Pacquiao.