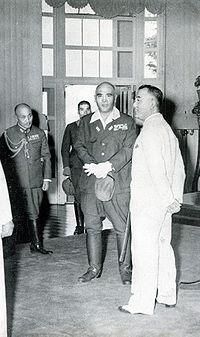 Meeting of Jorge B. Vargas, a secretary of President Manuel Luis Quezon y Molina and Homma Masaharu, a general Lieutenant of Imperial Japanese Army on February 20, 1943

Jorge B. Vargas (August 24, 1890 – February 22, 1980) was a lawyer and youth advocate born in Bago City, Negros Occidental. He graduated valedictorian from Bacolod High School in 1909 and obtained a Bachelor of Arts degree in 1911 and a Bachelor of Law degree with honors in 1914, both from the University of the Philippines. He was a founding member of the Philippine Amateur Athletic Federation in 1911 and served in its Executive Committee in 1918. [1]

After being admitted to the Philippine Bar association|Bar in 1914, he was appointed as law clerk in the Philippine Commission. He quickly rose through the ranks and was promoted to the position of Chief Clerk of the Department of the Interior in 1917. [3] In 1918 he served as the legislative secretary to House speaker|Speaker Sergio Osmeña of the House of Representatives and in 1919 was appointed by President Manuel Quezon as his Executive Secretary, becoming the first in the country to serve in such a position. [4]

Vargas was designated by Philippine Commonwealth President Manuel Quezon as mayor of the Greater Manila area in 1941, administer the "open city" upon the arrival of occupational Japanese imperial forces.

In 1960, the Republic of the Philippines conferred on him the Legion of Honor with the rank of Commander. [1]

Upon the death of Manuel Camus in 1949 he was unanimously chosen by the National Executive Board to serve as the BSP’s President and Chief Scout. He served the position of National President until 1961. He became a member of the World Scout Committee of the World Organization of the Scout Movement from 1951 to 1957.

Vargas was awarded the World Organization of the Scout Movement#Bronze Wolf|Bronze Wolf in 1959 and received other awards including the Silver Tamaraw (Philippines), Silver Fox (Canada), Silver Ibex (Austria), Silver Wolf (UK), and the White Eagle (Japan). He also became the first recipient of the Tanglaw ng Kabataan (Light of the Youth) Award of the BSP in 1961. [1]