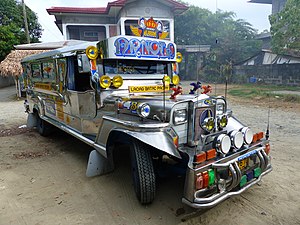 The jeepney is one of the most common modes of public transportation in the Philippines. Originally built from surplus US military jeeps used during the World War II, jeepneys have become a symbol of Filipino culture with their colorful outer design and efficient seating system.

The term "jeepney" came from the combination of the words "jeep" and "knee", which pertains to the vehicle's seating arrangement. Passengers are often seated face to face with their knees almost touching one another's.

Filipino locals got hold of surplus jeeps when the Americans began leaving the country at the end of World War II. To increase the jeep's seating capacity, the new local owners stripped down their purchased vehicles. They also added metal roofs to shade their passengers and installed colorful ornaments on the external casing of the jeeps.

Local jeepney manufacturers started making jeepneys that have bigger bodies and that run on diesel engines. This improved Philippine jeepneys by increasing their passenger capacity and lowering the drivers' fuel expenses. Soon enough, the army jeeps originally used as public vehicles were completely replaced by their locally-produced counterparts.

From Metro Manila, where using jeepneys as a public vehicle started, this newly-improved jeepney system started spreading to the provinces. Up to the present time, jeepneys are known to be among the commonest and cheapest modes of public transportation in the Philippines.

Modern-day Philippine jeepneys are now produced by local workshops and factories in the country. In the past, jeepney manufacturers were concentrated in Las Pinas City and Cavite. However, due to a noticeable decrease in sales, smaller manufacturers have gone bankrupt.

There are basically two types of jeepney manufacturers in the country: the backyard builders and the large volume manufacturers. Backyard builders, which are notably small businesses, are able to produce around five vehicles per month. Larger manufacturers, usually owned by bigger international corporations, have a bigger monthly production output.

A recent study compared the fuel consumption of a regular 16-passenger jeepney and a 54-passenger bus. The study found out that both use almost the same amount of fuel. Due to this, different restrictions have been imposed to limit jeepney production and route. The increase in the prices of raw materials used to produce these vehicles also contribute to the lower number of jeepneys being produced every month.

With the colorful decorations installed on the exterior of the vehicles, jeepneys have turned into one of the most common expressions of Philippine folk art. Lights, mirror and reflectors, paintings and different installations render almost no two jeepneys the same.

In addition to the external decor, the interior of the vehicle is also decked with curtains and paintings. A wooden money box which holds the day's earnings, and a miniature statue of a saint are often found on the vehicle's dashboard.

Upon riding a jeepney, the passengers instantly enter a communal relationship, which is very apparent in the culture of passing the fare from passengers to the driver.

With the advancement of technology, traditional jeepneys are slowly being replaced by sleeker and more eco-friendly counterparts, especially in Metro Manila. In the provinces, however, the jeepneys with their paintings and decorations continue to showcase Filipino artistry.