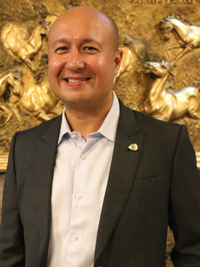 Jean Henri Diago Lhuillier (born on March 24, 1969) is an Filipino businessman, diplomat and sportsperson. He is the son of the Philippine Ambassador to Portugal Philippe Jones Lhuillier and Edna Diago Lhuillier. Jean Henri is the President and CEO of PJ Lhuillier Group of Companies, which operates and manages Cebuana Lhuillier Pawnshop, a large pawnshop chain in the Philippines, as well as related businesses.

Jean Henri graduated from Saint Mary’s College, Moraga, California|Moraga, California, USA with a degree in Economics and Business Administration in 1992. In 2009, he completed the Owner/President Management Program at the Harvard University. He also obtained a Doctor of Humanities Honoris Causa degree from the Polytechnic University of the Philippines in 2013.

The family’s business traces its roots to Cebu when in 1935, Jean’s grandfather, French Consul to the Philippines Henry Lhillier, established the first of a chain of Agencia in the province. The company was renamed P.J. Lhuillier, Incorporated (PJLI) in 1989 when Jean’s father, former Abassador to Rome Philippie J. Lhuillier, took over the company. The company put up Oceanic Gifts and Jewelry Stores and expanded into other lines of businesses directly or remotely related to the pawnshop business.

At an early age, Jean already knew what it takes to be a gemologist. When he was just 12 years old, his father sent him to Israel and India to learn more about the jewelry appraisal and diamond trade. There, he was trained by different rulers and teachers in appraisal. Later on, he was educated on the pawnshop industry by the general managers of the stores.

Jean recalls the summer he spent in the Philippines. His father would let him stay in the family’s pawnshops and sit beside the appraiser in Pasay, Baclaran and Caloocan. In the process, he learned not only the hands-on lessons of the trade and seeing the people pledging jewelries and valuables also taught him the value of money at an early age and that it should not be mishandled nor squandered.

He is the current Director and Chairman of the Board of Global Restaurant Concepts, the Philippine franchise holder of California Pizza Kitchen, P.F. Chang's, Ihop Restaurant, Morelli's Gelato, Gyu-Kaku, and Mad for Garlic.

Jean Henri is the current Vice President for External Affairs of the Chamber of Pawnbrokers of the Philippines, Inc. since 1999.

He is also a commander of the 101st Auxiliary Squadron of the Philippine Coast Guard since 2005.

He has recently become a member of the ASHOKA Innovators For The Public, the Paul Harris Society (Rotary Foundation of Rotary Int'l) and, a co-sponsor of the Lhuillier-Hess Scholarship, Wharton School of the University of Pennsylvania.

As a sports enthusiast, he supports programs that aim to develop the youth through sports particularly basketball, tennis, and softball.

In recent years, he has expanded Cebuana Lhuillier sports by engaging into international sports events such as the International Premier Tennis League (IPTL), the International Tennis Federation (ITF) Futures and the ATP Challenger Tour. He is co-owner of the Philippine Mavericks in the IPTL which brought the world's best players such as Serena Williams and Rafael Nadal among others, to the Philippines last December 2015. He also sponsored the the ATP Challenger Tour last January 2016 which featured the likes of former world number 8, Mikhail Youzhny.

On June 2014, Jean Henri Lhuillier was conferred the rank of Official Knight of the Equestrian Order of Saint Agatha by Minister Pasquale Valentini of the Department of Foreign Affairs in San Marino on July 29, 2014 at the Palazzo Begni, Contrada Omerelli, San Marino due to his seven years of active and consistent efforts to strengthen the bilateral relationship between San Marino and the Philippines.

He was also given the Sales Individual of the Year award from the 2014 Customer Service and Sales World Awards of the Silicon Valley Communications.

He is the recipient of the 2013 Juran Medal Award of the Philippine Society for Quality, Inc.

He was also hailed the Pawnbroker of the Year in 2011 by the Chamber of Pawnbrokers of the Philippines, Inc.