Jacinto R. Zamora (14 August 1835 – 17 February 1872) was a Filipino Catholic priest. He was part of the Gomburza, the three Filipino priests who were falsely accused of mutiny by the Spanish officers in the 19th century.

Zamora was born in Pandacan, Manila on 14 August 1835 to Venancio Zamora and Hilaria del Rosario. He studied Bachiller en Artes at the Colegio de San Juan de Letran. He finished Theology then Canon Law from the University of Santo Tomas. He proceeded to the Seminary of Manila afterward and pursued a doctorate in Canon Law. While still studying, he headed a small student protest that resulted in his confinement in his quarters for two months.

After the seminary, he was ordained to the priesthood and was assigned to serve in the parishes of Marikina, Pasig, and Lipa, Batangas. He was later appointed to the Manila Cathedral, serving as an examiner of new priests. 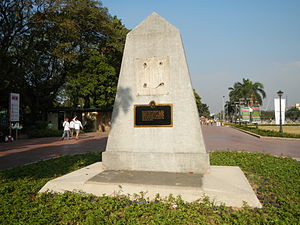 Execution site and marker of Gomburza

Zamora became a member of the Committee on Reforms, together with Father Mariano Gomez and Father Jose Burgos. They pushed for the secularization of the Filipino clergy, which angered the Spanish friars.

In 1872, Filipino workers at the Cavite arsenal revolted against the Spaniards after receiving reduced salaries. They complained that they should not pay tributes. Their cause was supported by Filipino soldiers in the Fort of San Felipe, Cavite. However, the Spanish authorities successfully put an end to the rebellion.

The Spanish friars connected the revolt to Zamora. He often played cards with other priests after mass and used the words "powder and munitions" to refer to money. The Spanish friars used this as evidence for his involvement in the Cavite mutiny.

Zamora, Gomez, and Burgos were tried at Fort Santiago and were found guilty. They were sentenced to death by garrote. They were then executed on 17 February 1872 at Bagumbayan. According to witnesses, Zamora was disoriented during his last days and, at the day of the execution, had already lost his mind. As a result, the young priest did not give any last words before the garrote took his life.

File:ParishoftheHolySacrificejf9407 03.JPG
Gomburza sculpture at Parish of the Holy Sacrifice