The Ivatans are a Filipino ethnolinguistic group predominant in the islands of Batanes of the Philippines. Their ethnogenesis is unclear; their origins remain untraced among scholars, but they are believed to be an Austronesian group, related to neighboring Ilocanos on a purely linguistic basis.

The culture of the Ivatans is partly influenced by the environmental condition of Batanes. Unlike the old-type nipa huts common in the Philippines, Ivatans have adopted their now-famous stone houses made of coral and limestone, designed to protect against the hostile climate.

Documents do not show much about the history of the Ivatans and at present, scholars who study their origins are still unsure as to their exact origin. They question whether the pre-historic Ivatans came from the northern part of Luzon or southern portions of China and Taiwan. There is evidence that they might be a surviving Christianized remnant of a people that once resided on all the islands between Luzon and Taiwan.[1] However, the close physical resemblance of the Ivatans to the Malays and the structure of their language could mean they came from other parts of the Philippines. By tracing their roots through Batanes' folklores, Omoto, a Japanese anthropologist of the Yami of Orchid Island (Lanyu), has demonstrated a closer genetic affinity of the Yami to the Tagalog and Visayan and a linguistic connection to the Batanic (Bashiic) sub-branch of the Malayo-Polynesian branch.[2] 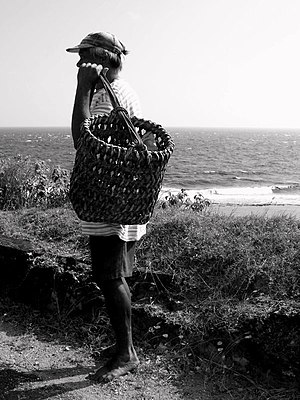 An Ivatan man fresh from work. 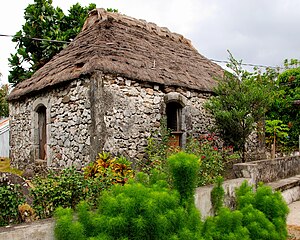 A Sinadumparan Ivatan house, one of the oldest structures in the Batanes islands. The house is made of limestone and coral and its roofing of cogon grass.

Ivatans were living in Batanes before the Spaniards arrived in the Philippines in the 16th century, protected by fortresses known as idjang, and living autonomously long thereafter. On June 26, 1783, Batanes was incorporated into the Spanish East Indies.[1] In 1686, Ivatans were forced to resettle in the lowlands of Batanes.[3] The Ivatans lived under Spanish rule for 115 years and gained their independence on September 18, 1898. However, June 6 is celebrated in Batanes as its founding day.[1]

One of the earliest accounts of the Ivatan is that of the British buccaneer William Dampier in 1687. Dampier described them as "short, squat people; hazel eyes, small yet bigger than Chinese; low foreheads; thick eyebrows; short low noses; white teeth; black thick hair; and very dark, copper-colored skin."[2] They also have a strong mixture of the short type of the Mongols, and some individuals seem to have some physical characteristics peculiar to the Ainus of Japan.[1]

An Ivatan woman wearing a vakul, a headgear for sunlight and rain protection made from vuyavuy palm fiber.[5]

The mother tongue of the Ivatans is the Chirin nu Ibatan but is commonly known as Ivatan. A distinct Austronesian language, the Ivatan has two dialects including Basco, the Itbayáten,[6] and possibly Yami.[1] The Ivatans widely speak and understand the Ilocano, Tagalog, and English languages.[2]

Today, most Ivatans are Catholics, like the rest of the country, although some have not converted and practice ancestral worship to their anitos.[1] However, there are growing Protestant denominations especially in Basco, the capital town of Batanes.[2]

The Ivatan's culture has been largely influenced by the climate of Batanes. Due to severe climatic disruptions to their agriculture, Ivatans have developed numerous successful strategies to protect their food supply and way of life.

Traditionally, because of frequent typhoons and drought, they plant root crops able to cope with the environment. These crops include yam, sweet potato, taro, garlic, ginger, and onion, as they ensure higher chances of survival during awry climate conditions.[7] The Ivatan study the behavior of animals, sky color, wind, and clouds to predict the weather. Ivatans usually gather their animals and stay in their houses when they see that the cows take shelter from the Template:Transl (communal pasture) and birds taking refuge in houses or in the ground. A pink sky with an orange hue also heralds a storm.[8]

The sea is vital to the Ivatan's way of life.[3] They depend on the flying fish (dibang) and dolphinfish (arayu) present on the shores of Batanes in the months of March through May.[2] They have a native delicacy called uvod (the pith of the banana stalk) which is served with the wine palek, on festive occasions such as weddings.[1]

Before Spaniards arrived in the Philippines, Ivatans built their houses from cogon grass. These homes were small, well-situated, and designed to protect against strong winds.[2][3] The Spaniards introduced large-scale production of lime to the Ivatan for the construction of their now-famous stone houses. Meter-thick limestone walls,[3] are designed to protect against the harsh Batanes environment,[9] which is known as a terminal passage of typhoons in the Philippines. The basic cogon grass is still preserved as roofs of their houses, thickly constructed to withstand strong winds.[2] These houses are comparable to the white houses in New Zealand, Ireland, and the Scottish Highlands.[10]

One of the endemic clothing of the Ivatans is the vakul. A vakul is a headgear designed to protect the wearer from sun and rain. It is made from vuyavuy palm fiber.[3][5]

The Ivatans have three folk song styles: the laji, the kanta, and the kalusan.[2] The laji are ancient lyrical songs that are supposed to be sung when they are merry or just finished work.[11] The kalusan is sung during work.[2]

The Ivatan have legends that are called kabbata.[12] They have the Template:Transl, chants that chronicle the adventures of the Ivatan's forefathers as they escape a disaster.[13]