Islamic mythology is the body of myths associated with Islam and the Quran. Islam is a religion that is more concerned with social order and law than with religious ritual or myths.[1] The Oxford Companion to World Mythology identifies a number of traditional narratives as "Islamic myths".[1] These include a creation myth and a vision of afterlife, which Islam shares with the other Abrahamic religions, as well as the distinctively Islamic story of the Kaaba.[1]

The traditional biography of the Islamic prophet Muhammad, which plays a central role in Islamic teachings, is generally recognized as being largely historical in nature, and Islam depends less on mythology than Judaism and Christianity.[1] However, the canonical narrative includes two key supernatural events: the divine revelation of the Quran and the Isra and Mi'raj — the night journey to Jerusalem followed by the ascension to the Seventh Heaven.[1] In addition, Islamic scriptures contain a number of legendary narratives about biblical characters, which diverge from Jewish and Christian traditions in some details.[1]

The discussion of religion in terms of mythology is a controversial topic.[2] The word "myth" is commonly used with connotations of falsehood,[3] reflecting a legacy of the derogatory early Christian usage of the Greek word muthos in the sense of "fable, fiction, lie" to refer to classical mythology.[4] However, the word is also used with other meanings in academic discourse. It may refer to "a story that serves to define the fundamental worldview of a culture"[3] or to stories which a given culture regards as true (as opposed to fables, which it recognizes as fictitious).[5]

Biblical stories in the Quran

The Quran includes many biblical narratives. Central figures, such as Moses (Musa),[6] Abraham (Ibrahim),[7] Joseph (Yūsuf), Mary (Maryam)[8] and Jesus (Isa), reappear throughout the Quran. However, in contrast to the Biblical narratives, the Quran only provides a summary of a certain story, and gets into the religio-moral point, rather scattered through the Quran, instead offering such narrations in a chronological order. More extensive details about stories incorporated by the Quran were taken from extra-Islamic sources (Isra'iliyyat). Alluding that such stories were of Jewish origin, in fact, Isra'iliyyats may also derive from other religions, such as Christianity or Zoroastrianism.[9] Many of them were stored in Qisas Al-Anbiya (Tales of Prophets), but also integrated in Quranic exegesis (Tafsir). Although important in early Tafsir, later scholars discouraged the usage of Isra'iliyyats.[10] Besides narrations from the canonical Bible, Islam further adapted Apocryphal and Midrashic writings.[11]

Creation of the world

In the Quran, the heavens and the earth were joined together as one "unit of creation", after which they were "cloven asunder".[12][13] After the parting of both, they simultaneously came into their present shape after going through a phase when they were smoke-like.[14][13] The Quran states that the process of creation took 6 youm(يوم),[15][13] In the Quran, the word youm (often translated to "era") and means day.

According to the mufassirs, Islam acknowledges three different types of creation:

According to Quranic creation narrative, God informed the angels, that He was going to create a khalifa (vicegerent) on earth. The meaning of Khalifa hold different interpretations within Islamic exegesis:

Adam is according to Islam, both the first human and the first prophet.[24] The Quran says that he and his wife dwelled in Garden of Eden. The Quranic counterpart of the fall of man differs in some regards from the Book of Genesis. The Quran does not blame women for seducing men, since both Adam and his in the Quran unnamed wife, eat from the forbidden tree. Further, the forbidden tree is not identified as Tree of the knowledge of good and evil but as Tree of Eternity. The Quran does not mention the serpent as a symbol for the devil, but only Satan himself. While the Old Testament curses the earth for Adams transgression, according to the Quran, God declares the earth as a dwelling place for humans, but not curses it nor is Adam destined to die for his sin,[25] thus lacking the doctrine of original sin, prevailing in Christian theology. Islamic theology gives a more optimistic attitude towards humanity's fall. Only due to free will, humans are able to produce good. Thus, although Adam's disobedience created evil, only this made it possible to create good[26] The disobediences of Adam and his wife were already forgiven by God during their life.[27][28]

Islamic traditions are more extensive, adding further details into the Quranic creation narrative. According to a common narrative, God ordered the Archangels to collect a handful of soil from earth. But every time an archangel approached earth, the earth sought refuge in God, that it might not be distorted. All the archangels returned empty-handed, except Azrael, who succeeded because he sought refuge in God before, for that he will not returned unsuccessful.[29] Another common traditions, portrayed the body of Adam lying on the ground for forty years, whereupon Iblis became curious of the new creation. After investigating the lifeless body, he promised that, if he will gain authority over it, he will destroy it.[30] In another tradition, it is not Azrael, but Iblis, included among the archangels, who succeeded in collecting soil from the earth, thus he later declined to prostrate himself before whose formation he just assisted.[31]

Islamic traditions often use figures similar to the Biblical narrative. Adam's wife is commonly named Hawa, and the serpent reappears together with a peacock as two animals, which supported Iblis to slip into Adam's abode.[32] Many denied, that the Garden in which Adam dwelled with his wife, was identical with the Paradise in afterlife. They rather lived in paradisical conditions before their fall, while after their fall, they need to work to survive. Unlike Christian mythology, in Islamic thought, they did not simply walk out of paradise, but fell out of it. Hawa was punished with childbirth, menstruation and stupidity, while Adam became bald[25] and the serpent lost its legs.

Regarding the creation of Muhammad, Islam developed the belief in the pre-existence of Muhammad. This posits that God created the spiritual nature of Muhammad before God created the universe or Adam.[33] Following this belief, Muhammad was the first prophet created, but the last one sent to mankind.[34] When Adam walked in heaven, he once read the Shahada inscripted in the Throne of God, a belief attested by Al-Bayhaqi, who attributes it to Umar.[35] In a Shia version, the inscription also mentions Ali.[36] 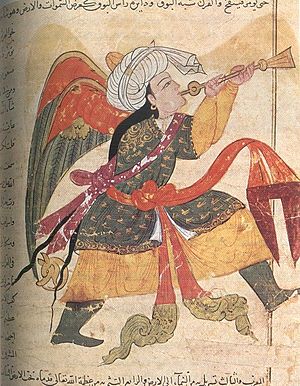 Islamic drawing of an angel blowing a horn, probably Israfil

Depiction of Iblis with turban, refusing to prostrate

Other prominent creatures within Islamic mythological traditions are Buraq, Houris and Yajuj and Majuj (Gog and Magog). Later, spiritual entities from other cultures were identified with whose of the Quran and assimilated to Islamic lore, such as Peri of Persian-[42] Ghoul of Arabian- and İye[43] of Turkic origin.

Map of the world according to Zakariya al-Qazwini. The world carried by a fish, a bull and an angel.

According to popular ideas derived from cultural beliefs during the Classical Islam period, the earth is flat, surrounded by water, which is veiled in darkness, with Mount Qaf at the edge of the visible world. The world is carried by different creatures: an angel, a bull and a fish. Zakariya al-Qazwini identified the bull and the fish with the biblical monsters, Behemoth and Leviathan.[44] Both heaven and hell coexist with the temporary world. The seven layers of hell are identified with the seven earths. Sijjin is one of the lowest layers of hell, while Illiyin the highest layer of heaven.[45] Hell is portrayed with the imageries of seas of fire, dungeons, thorny shrubs, the tree of Zaqqum, but also immense cold at bottom, inhabited by scorpions, serpents, zabaniyya and shayatin.[46] The imageries heavens are described with different colors, seas of light, the tree of heaven, inhabited by angels and houris,[47] as a Garden with sprawling meadows and flowing rivers. The inhabitants can rest on couches bedecked with silk and visit the other deads if they wish.[48]

Islamic scholars knew the world was not flat. Islamic astronomy was developed on the basis of a spherical earth inherited from Hellenistic astronomy.[49] The Islamic theoretical framework largely relied on the fundamental contributions of Aristotle (De caelo) and Ptolemy (Almagest), both of whom worked from the premise that the Earth was spherical and at the centre of the universe (geocentric model).[49]\

The 11th-century scholar Ibn Hazm stated: "Evidence shows that the Earth is a sphere but public people say the opposite." He added: "None of those who deserve being Imams for Muslims has denied that Earth is round. And we have not received anything indicates a denial, not even a single word."[50]

According to Islamic mythology, God instructed Adam to construct a building (called the Kaaba) to be the earthly counterpart of the House of Heaven and that Ibrahim (Abraham) and Ismail (Ishmael) later rebuilt it on its original foundations after was destroyed in the flood of Nuh (Noah).[51][52] According to other opinions, Ibrahim and Ismail were the first to build it.[52] As Ismail was searching for a stone to mark a corner with, he met with the angel Jibrail (Gabriel). Jibrail gave him the Black Stone. According to the hadith,[53] the Black Stone is reported to have been milky white after being descended from Heaven but was rendered black due to the sins of the people, who had touched it.[54][55] Muslims do not worship the Black Stone.[56]

The Kaaba was originally intended as a symbolic house for the one monotheistic God. However, after Ibrahim's death, people started to fill the Kaaba with pagan idols. When Muhammad conquered Mecca after his exile, he removed the idols from the Kaaba.[57][58] The inside of the Kaaba is now empty.[59] It now stands as an important pilgrimage site, which all Muslims are supposed to visit at least once if they are able (Hajj).[60][59] Muslims are supposed to pray five times a day while facing in the Kaaba's direction (qibla).[59][61]

With the advent of Salafi reformism, starting during the Age of Enlightenment onwards, Muslim thinkers and scholars sought out for a more practical model to restore Muslim community accompanied by the threat of western colonization, downplaying the mystic, cosmic and mythological aspects attributed to Muhammad, while simultaneously emphasizing him and his sunnah's social and political role.[62]

Many adherents of the Muslim Brotherhood reject most of traditional Islamic mythological narratives. Sayyid Qutb broke the connection between Khidr and the Quran, by eliminating his identification with God's servant mentioned in Surah 18 in his tafsir. Accordingly, whose who follow him, would not longer perceive Khidr as figure related to Islamic faith.[63] The teachings of Sulaiman Ashqar disapprove many records about the traditional material regarding angels, including Classical scholars, who used them, what leads to a marginalization of Islamic thought of angels, including names and stories regarding their origin.[64]