The Invasion of Lingayen Gulf (Filipino: Paglusob sa Golpo ng Lingayen), 6–9 January 1945, was an Allied amphibious operation in the Philippines during World War II. In the early morning of 6 January 1945, a large Allied force commanded by Admiral Jesse B. Oldendorf began approaching the shores of Lingayen. U.S. Navy and Royal Australian Navy warships began bombarding suspected Japanese positions along the coast of Lingayen from their position in Lingayen Gulf for three days. On 9 January, the U.S. 6th Army landed on a 20 mi (32 km) beachhead between the towns of Lingayen and San Fabian.

During World War II, the Lingayen Gulf proved a strategically important theater of war between American and Japanese forces. On 22 December 1941, the Japanese 14th Army—under Lieutenant General Masaharu Homma—landed on the Eastern part of the gulf at Agoo, Caba, Santiago and Bauang, where they engaged in a number of relatively minor skirmishes[1] with the defenders, which consisted of a poorly equipped contingent of predominantly American and Filipino troops, and managed to successfully invade and occupy the gulf. Following the defeat, the next day General Douglas MacArthur issued the order to retreat from Luzon and withdraw to Bataan. For the next three years, the gulf remained under Japanese occupation prior to the Lingayen Gulf Landings. 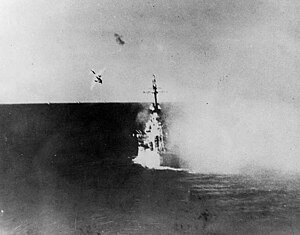 USS Columbia is attacked by a kamikaze off Lingayen Gulf, 6 January 1945.

The kamikaze aircraft hits Columbia at 17:29.

Beginning on 6 January 1945, a heavy naval and air bombardment of suspected Japanese defenses on Lingayen began. Underwater demolitions began, but found no beach obstacles, and encountered sparse opposing forces. Aircraft and naval artillery bombardment of the landing areas also occurred, with kamikazes attacking on the 7th. On the 8th, it was observed that in the town of Lingayen, as a response to the pre-landing bombardment, Filipinos had begun to form a parade, complete with United States and Philippine flags; fire was shifted away from that area.[2]

At 09:30 on 9 January 1945, about 68,000 GIs under General Walter Krueger of the U.S. 6th Army—following a devastating naval bombardment—landed at the coast of Lingayen Gulf meeting no opposition. A total of 203,608 soldiers were eventually landed over the next few days, establishing a 20 mi (32 km) beachhead, stretching from Sual, Lingayen and Dagupan (XIV Corps) to the west, and San Fabian (I Corps) to the east. The total number of troops under the command of MacArthur was reported to have even exceeded the number that Dwight D. Eisenhower controlled in Europe.[3] Within a few days, the assault forces had quickly captured the coastal towns and secured the 20-mile-long (32 km) beachhead, as well as penetrating up to five miles (8 km) inland.

Despite their success in driving out the Japanese forces stationed there, they suffered relatively heavy losses; particularly to their convoys, due to kamikaze attacks. From December 13, 1944 - January 13, 1945, a total of 24 ships were sunk and another 67 were damaged by kamikazes, though this number includes landings on Luzon, outside of Lingayen Gulf, and the Philippine island of Mindoro. Ships damaged included the battleships USS Mississippi, New Mexico, and Colorado (the latter was accidentally hit by friendly fire), the heavy cruiser HMAS Australia, the light cruiser USS Columbia, and the destroyers USS Long, and USS Hovey.[3] Following the landings, the Lingayen Gulf was turned into a vast supply depot for the rest of the war to support the Battle of Luzon.

The Omanney Bay, a large escort carrier, was severely damaged by a Yokosuka P1Y kamikaze carrying two bombs, and later had to be scuttled by a torpedo. Although a large variety of ship classes were hit, Destroyer/Minesweepers made up three of the four ships sunk, and may have been targeted because they were smaller, isolated while performing their sweeping duties, and by necessity in the front of the convoy, as they had to sweep for mines before the larger ships of the allied force could advance into the Gulf. The naval historian Samuel Eliot Morison noted that at least on January 6, minesweepers bore the brunt of the attack because they were isolated from other ships, and had fewer and less sophisticated anti-aircraft weapons than larger ships. By January 12, most of the ships hit were larger cargo ships supplying troops that had already landed.[4]

On 9 January 2008, Gov. Amado Espino, Jr. and Vice Gov. Marlyn Primicias-Agabas of Pangasinan institutionalized the commemoration to honor the war veterans. The resolution named 9 January as Pangasinan Veterans' Day. In the 63rd anniversary commemoration of the Lingayen Gulf Landing, President Fidel Ramos appealed to U.S. President George W. Bush for 24,000 surviving war veterans, to pass two legislative bills pending since 1968 at the US House of Representatives — the Filipino Veterans' Equity Act of 2006 and the Filipino Veterans' Equity of 2005 sponsored by former Senator Daniel Inouye.[5]