Insular Government of the Philippine Islands

The term "insular" refers to the fact that the government operated under the authority of the U.S. Bureau of Insular Affairs. Puerto Rico and Guam also had insular governments at this time. From 1901 to 1922, the U.S. Supreme Court wrestled with the constitutional status of these governments in the Insular Cases.[4] In Dorr v. United States (1904), the court ruled that Filipinos did not have a constitutional right to trial by jury.[4] In the Philippines itself, the term "insular" had limited usage. On banknotes, postage stamps, and the coat of arms, the government referred to itself simply as the "Philippine Islands".

The Insular Government evolved from the Taft Commission, or Second Philippine Commission, appointed on March 16, 1900. This group was headed by William Howard Taft, and was granted legislative powers by President William McKinley in September 1900. The commission created a judicial system, an educational system, a civil service, and a legal code. The legality of these actions was contested until the passage of the Spooner Amendment in 1901, which granted the U.S. president authority to govern the Philippines.[5]

The Insular Government saw its mission as one of tutelage, preparing the Philippines for eventual independence.[6] On July 4, 1901, Taft was appointed "civil governor", who also named his cabinet at his inaugural address.[7] Military Governor Adna Chaffee retained authority in disturbed areas. On July 4, 1902, the office of military governor was abolished, and Taft became the first U.S. governor-general of the Philippine Islands.[8]

The Philippine Organic Act disestablished the Catholic Church as the state religion. In 1904, Taft negotiated the purchase of 390,000 acres of church property for $7.5 million.[9] Despite this, the Insular Government failed to investigate the land titles of the friars' and restore them to the patrimony of the Filipinos. The Insular Government then established a land titling system for these lands, but due to a small surveyor staff, a lot of parcels of land remained untitled.[10]

Philippine nationalists led by Manuel L. Quezon and Sergio Osmeña enthusiastically endorsed the draft Jones Bill of 1912, which provided for Philippine independence after eight years, but later changed their views, opting for a bill which focused less on time than on the conditions of independence. The nationalists demanded complete and absolute independence to be guaranteed by the United States, since they feared that too-rapid independence from American rule without such guarantees might cause the Philippines to fall into Japanese hands. The Jones Bill was rewritten and passed Congress in 1916 with a later date of independence.[12] 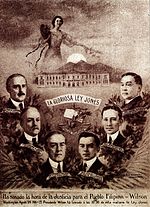 This poster advertises the passage of the Jones Law

The Jones Law, or Philippine Autonomy Act, replaced the Organic Act. Its preamble stated that the eventual independence of the Philippines would be American policy, subject to the establishment of a stable government. The law maintained an appointed governor-general, but established a bicameral Philippine Legislature to replace the elected Philippine Assembly (lower house); it replaced the appointive Philippine Commission (upper house) with an elected senate.[13]

Filipinos suspended the independence campaign during the First World War and supported the United States and the Entente Powers against the German Empire. After the war they resumed their independence drive with great vigour.[14] On March 17, 1919, the Philippine Legislature passed a "Declaration of Purposes", which stated the inflexible desire of the Filipino people to be free and sovereign. A Commission of Independence was created to study ways and means of attaining liberation ideal. This commission recommended the sending of an independence mission to the United States.[15] The "Declaration of Purposes" referred to the Jones Law as a veritable pact, or covenant, between the American and Filipino peoples whereby the United States promised to recognize the independence of the Philippines as soon as a stable government should be established. American Governor-General of the Philippines Francis Burton Harrison had concurred in the report of the Philippine Legislature as to a stable government.

The Philippine Legislature funded an independence mission to the United States in 1919. The mission departed Manila on February 28 and met in America with and presented their case to Secretary of War Newton D. Baker.[16] U.S. President Woodrow Wilson, in his 1921 farewell message to Congress, certified that the Filipino people had performed the condition imposed on them as a prerequisite to independence, declaring that, this having been done, the duty of the U.S. is to grant Philippine independence.[17] The Republican Party then controlled Congress and the recommendation of the outgoing Democratic president was not heeded.[16] 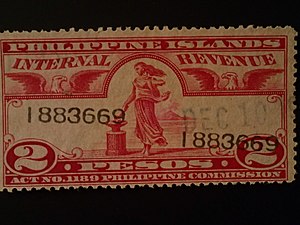 This revenue stamp for the Philippine Islands was issued in 1930.

The Tydings–McDuffie Act provided for the drafting and guidelines of a constitution for a ten-year "transitional period" as the Commonwealth of the Philippines before the granting of Philippine independence. On May 5, 1934, the Philippines Legislature passed an act setting the election of convention delegates. Governor-General Frank Murphy designated July 10 as the election date, and the Convention held its inaugural session on July 30. The completed draft Constitution was approved by the Convention on February 8, 1935, approved by U.S. President Franklin Roosevelt on March 23, and ratified by popular vote on May 14. The first election under the new 1935 constitution was held on September 17, and on November 15, 1935 the Commonwealth was established.[19] 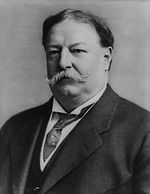 On July 4, 1901, executive authority over the islands was transferred to the president of the Philippine Commission, who had the title of "civil governor"–a position appointed by the President of the United States and approved by the United States Senate. For the first year a military governor, Adna Chaffee, ruled parts of the country still resisting American rule, concurrent with civil governor William Howard Taft.[20] Disagreements between the two were not uncommon.[21] The following year, on July 4, 1902, the civil governor became the sole executive authority of the islands.[22] Chaffee remained as Commander of the Philippine Division until September 30, 1902.[23]

Template:Main From the passage of the Organic Act until independence, the Philippine Islands were represented in the United States House of Representatives by two, and then one, resident commissioners of the Philippines. Similar to delegates and the Resident Commissioner of Puerto Rico, they were nonvoting members of Congress.