From Wikipilipinas
Jump to navigation Jump to search
For the Philippine TV series, see Ilustrado (TV series). For the followers of Ilustración, see Enlightenment in Spain. 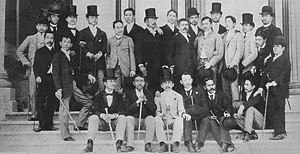 The Ilustrados, or the "enlightened ones," constituted the Filipino educated class during the Spanish colonial period in the late 19th century.[1][2] Elsewhere in New Spain (of which the Philippines were part), the term gente de razón carried a similar meaning.

They were the middle class who were educated in Spain and exposed to Spanish liberal and European nationalist ideals. The Ilustrado class was composed of native-born intellectuals and cut across ethnolinguistic and racial lines—Indios, Insulares and Mestizos, among others—and sought reform through "a more equitable arrangement of both political and economic power" under Spanish tutelage.

Stanley Karnow, in his In Our Image: America's Empire in the Philippines, referred to the Ilustrados as the "rich Intelligentsia" because many were the children of wealthy landowners. They were key figures in the development of Filipino nationalism.[3][4][5][6][7][8] 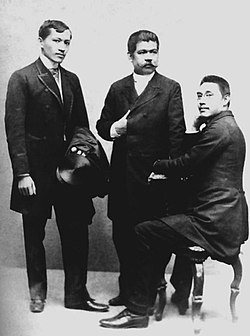 The most prominent Ilustrados were Graciano López Jaena, Marcelo H. del Pilar, Mariano Ponce, Antonio Luna and José Rizal, the Philippine national hero. Rizal's novels Noli Me Tangere ("Touch Me Not") and El Filibusterismo ("The Subversive") "exposed to the world the injustices imposed on Filipinos under the Spanish colonial regime".[7][9]

In the beginning, Rizal and his fellow Ilustrados preferred not to win independence from Spain, instead they yearned legal equality for both Peninsulares and natives—Indios, Insulares, and mestizos, among others—in the economic reforms demanded by the Ilustrados were that "the Philippines be represented in the Cortes and be considered as a province of Spain" and "the secularization of the parishes."[8][9]

However, in 1872, nationalist sentiment grew strongest, when three Filipino priests, José Burgos, Mariano Gomez and friar Jacinto Zamora, who had been charged with leading a military mutiny at an arsenal in Cavite, near Manila, were executed by the Spanish authorities. The event and "other repressive acts outraitings and activities, Rizal was executed on December 30, 1896. His execution propelled the Ilustrados . This also prompted unity among the Ilustrados and Andrés Bonifacio's radical Katipunan.[8] Philippine policies by the United States reinforced the dominant position of the Ilustrados within Filipino society. Friar estates were sold to the Ilustrados and most government positions were offered to them.[8]