Ilocos Norte is noted for being the birthplace of the former President Ferdinand E. Marcos.

Long before the arrival of the Spaniards, there already existed an extensive region (consisting of the present provinces of Ilocos Norte, Ilocos Sur, Abra and La Union) renowned for its gold mines. Merchants from Japan and China would often visit the area to trade gold with beads, ceramics and silk. The Austronesian inhabitants of the region called their place samtoy, from sao mi toy, which literally meant "our language here"

In 1571, when the Spanish conquistadors had Manila more or less under their control, they began looking for new sites to conquer. Miguel Lopez de Legazpi's grandson, Juan de Salcedo, volunteered to lead one of these expeditions. Together with 8 armed boats and 45 men, the 22-year-old voyager headed north. On June 13, 1572, Salcedo and his men landed in present-day Vigan and then proceeded towards Laoag, Currimao and Badoc. As they sailed along the coast, they were surprised to see numerous sheltered coves (looc) where the locals lived in harmony. As a result, they named the region Ylocos and its people Ylocanos.

As the Christianization of the region grew, so did the landscape of the area. Vast tracts of land were utilized for churches and bell towers in line with the Spanish mission of bajo las campanas. In the town plaza, it was not uncommon to see garrisons under the church bells. The colonization process was slowly being carried out.

The Spanish colonization of the region, however, was never completely successful. Owing to the abusive practices of many Augustinian friars, a number of Ilocanos revolted. Noteworthy of these were the Dingras uprising (1589) and Pedro Almasan revolt (San Nicolas, 1660). In 1762, Diego Silang led a series of battles aimed at freeing the Ilocano. When he died from his compatriot's bullet, his widow Gabriela continued his cause. However, she too was captured and hanged.

In 1807, the sugar cane (basi) brewers of Piddig rose up in arms to protest the government's monopoly of the wine industry. In 1898, the church excommunicated Gregorio Aglipay for refusing to cut off ties with the revolutionary forces of Gen. Emilio Aguinaldo. Unperturbed, he established the Iglesia Filipina Independiente. Aglipay’s movement.

In an effort to gain more political control and because of the increasing population of the region, a Royal Decree was signed on February 2, 1818 splitting Ilocos into two provinces: Ilocos Norte and Ilocos Sur. Soon thereafter, La Union and Abra likewise became independent provinces. 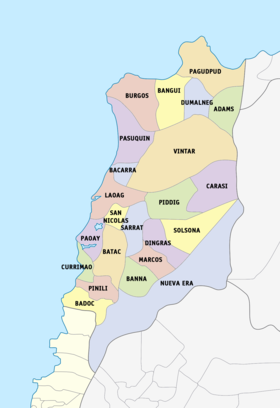 Ilocos Norte covers a total area of 3,467.89 square kilometres (1,338.96 sq mi) occupying the northern tip of the Ilocos Region in Luzon. The province is bordered by Cagayan to the extreme northeast, Apayao to the east, and Abra to the southeast, Ilocos Sur to the southwest, the South China Sea to the west, and the Luzon Strait to the north.

Ilocos Norte comprises 21 municipalities and 2 component cities, further subdivided into 557 barangays. There are two legislative districts in the province.

Ilocos Norte has 557 barangays comprising its 21 municipalities and 2 cities.

Roman Catholicism and the Aglipayan Church are the two major religions in the province.Template:Citation needed

Among the major Roman Catholic churches in Ilocos Norte include:

Aside from the national language and English, there are three indigenous languages in Ilocos Norte. There are the dominant Ilokano language, the Isnag language of the east, and the Faire Atta language in Currimao.

The province specializes in the following products and industries:

Ilocos Norte is also known as a northern tourist destination, being the location of Fort Ilocandia, hotel, resort and casino. Built between 1981 and 1983 by the Philippine Tourism Authority, the Spanish-Moroccan Villa was designed by Architect Jeorge Ramos. The golf course on Paoay Lake was built by Marcos in 1977, and designed by Gary Player.[3] Also of note are the La Paz Sand Dunes, Malacañang of the North, Cape Bojeador Lighthouse, Bangui Wind Farm, Saud Beach in Pagudpud, and the Early Pliocene calcarenite Kapurpurawan Burgos Formation, which has been sculpted by wind and waves.[4]