Ilocano (also Ilokano; /iːloʊˈkɑːnoʊ/;[1] Ilocano: Pagsasao nga Ilokano) is an Austronesian language spoken in the Philippines. It is the third most-spoken native language in the country.

The Ilokano people had their own distinct indigenous writing system and script known as kur-itan. There have been proposals to revive the kur-itan script by teaching it in Ilokano-majority public and private schools in Ilocos Norte and Ilocos Sur.[3]

Ilocano, like all Philippine languages, is an Austronesian language, a very expansive language family believed to originate in Taiwan.[4][5] Ilocano comprises its own branch within the Philippine Cordilleran language subfamily. It is spoken as first language by seven million people.[6]

A lingua franca of the northern region of the Philippines, it is spoken as a secondary language by more than two million people who are native speakers of Ibanag, Ivatan, and other languages in Northern Luzon.[7]

The language is spoken in northwest Luzon, the Babuyan Islands, Cordillera Administrative Region, Cagayan Valley, northern parts of Central Luzon, Mindoro and scattered areas in Mindanao (the Soccsksargen region in particular).[8] The language is also spoken in the United States, with Hawaii and California having the largest number of speakers.[9] It is the third most spoken non-English language in Hawaii after Tagalog and Japanese, with 17% of those speaking languages other than English at home (25.4% of the population) speaking the language.[10]

In September 2012, the province of La Union passed an ordinance recognizing Ilocano (Iloko) as an official provincial language, alongside Filipino and English, as national and official languages of the Philippines, respectively.[11] It is the first province in the Philippines to pass an ordinance protecting and revitalizing a native language, although there are also other languages spoken in the province of La Union, including Pangasinan and Kankanaey.[11] 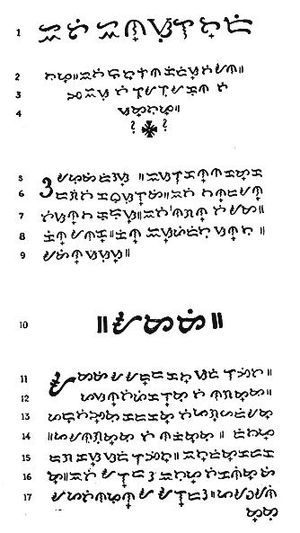 Precolonial Ilocano people of all classes wrote in a syllabic system known as Baybayin prior to European arrival. They used a system that is termed as an abugida, or an alphasyllabary. It was similar to the Tagalog and Pangasinan scripts, where each character represented a consonant-vowel, or CV, sequence. The Ilocano version, however, was the first to designate coda consonants with a diacritic mark – a cross or virama – shown in the Doctrina Cristiana of 1621, one of the earliest surviving Ilokano publications. Before the addition of the virama, writers had no way to designate coda consonants. The reader, on the other hand, had to guess whether the vowel was read or not, due to this vowels "e" and "i" are interchangeable and letters "o" and "u", for instance "tendera" and "tindira" (shop-assistant).

In recent times, there have been two systems in use: The "Spanish" system and the "Tagalog" system. In the Spanish system words of Spanish origin kept their spellings. Native words, on the other hand, conformed to the Spanish rules of spelling. Most older generation of Ilocanos use the Spanish system.

In the system based on that of Tagalog there is more of a phoneme-to-letter correspondence, and better reflects the actual pronunciation of the word.Template:Efn The letters ng constitute a digraph and counts as a single letter, following n in alphabetization. As a result, numo humility appears before ngalngal to chew in newer dictionaries. Words of foreign origin, most notably those from Spanish, need to be changed in spelling to better reflect Ilocano phonology. Words of English origin may or may not conform to this orthography. A prime example using this system is the weekly magazine Bannawag.

Samples of the two systems

The following are two versions of the Lord's Prayer. The one on the left is written using the Spanish-based orthography, while the one on the right uses the Tagalog-based system.

With the implementation by the Spanish of the Bilingual Education System of 1897, Ilocano, together with the other seven major languages (those that have at least a million speakers), was allowed to be used as a medium of instruction until the second grade. It is recognized by the Commission on the Filipino Language as one of the major languages of the Philippines.[13] Constitutionally, Ilocano is an auxiliary official language in the regions where it is spoken and serves as auxiliary media of instruction therein.[14]

In 2009, the Philippine Department of Education instituted department order 74, s. 2009 stipulating that "mother tongue-based multilingual education" would be implemented. In 2012, department order 16, s. 2012 stipulated that the mother tongue-based multilingual system was to be implemented for kindergarten to grade 3 effective school year 2012-2013.[15] Ilocano is used in public schools mostly in the Ilocos region and the Cordilleras. It is the primary medium of instruction from kindergarten to grade 3 (except for the Filipino and English subjects) and is also a separate subject from grade 1 to grade 3. Thereafter, English and Filipino are introduced as mediums of instructions.

The ten commandments in Ilocano.

Ilocano animistic past offers a rich background in folklore, mythology and superstition (see Religion in the Philippines). There are many stories of good and malevolent spirits and beings. Its creation mythology centers on the giants Aran and her husband Angalo, and Namarsua (the Creator).

The epic story Biag ni Lam-ang (The Life of Lam-ang) is undoubtedly one of the few indigenous stories from the Philippines that survived colonialism, although much of it is now acculturated and shows many foreign elements in the retelling. It reflects values important to traditional Ilokano society; it is a hero's journey steeped in courage, loyalty, pragmatism, honor, and ancestral and familial bonds.

Ilocano culture revolves around life rituals, festivities and oral history. These were celebrated in songs (kankanta), dances (salsala), poems (dandaniw), riddles (burburtia), proverbs (pagsasao), literary verbal jousts called bucanegan (named after the writer Pedro Bucaneg, and is the equivalent of the Balagtasan of the Tagalogs) and epic stories.

Modern Ilocano has two dialects, which are differentiated only by the way the letter e is pronounced. In the Amianan (Northern) dialect, there exist only five vowels while the Abagatan (Southern) dialect employs six.

Reduplicate vowels are not slurred together, but voiced separately with an intervening glottal stop:

The letter in bold is the graphic (written) representation of the vowel.

For a better rendition of vowel distribution, please refer to the IPA Vowel Chart.

Although the modern (Tagalog) writing system is largely phonetic, there are some notable conventions.

In native morphemes, the close back rounded vowel /u/ is written differently depending on the syllable. If the vowel occurs in the ultima of the morpheme, it is written o; elsewhere, u.

Instances such as masapulmonto, You will manage to find it, to need it, are still consistent. Note that masapulmonto is, in fact, three morphemes: masapul (verb base), -mo (pronoun) and -(n)to (future particle). An exception to this rule, however, is laud /la.ʔud/ (west). Also, u in final stressed syllables can be pronounced [o], like [dɐ.ˈnom] for danum (water).

The two vowels are not highly differentiated in native words due to fact that /o/ was an allophone of /u/ in the history of the language. In words of foreign origin, notably Spanish, they are phonemic.

Unlike u and o, i and e are not allophones, but i in final stressed syllables in words ending in consonants can be [ɛ], like ubíng [ʊ.ˈbɛŋ] (child).

In addition, dental/alveolar consonants become palatalized before /i/. (See Consonants below).

Diphthongs are combination of a vowel and /i/ or /u/. In the orthography, the secondary vowels (underlying /i/ or /u/) are written with their corresponding glide, y or w, respectively. Of all the possible combinations, only /aj/ or /ej/, /iw/, /aw/ and /uj/ occur. In the orthography, vowels in sequence such as uo and ai, do not coalesce into a diphthong, rather, they are pronounced with an intervening glottal stop, for example, buok hair /bʊ.ʔuk/ and dait sew /da.ʔit/.

The diphthong /ei/ is a variant of /ai/ in native words. Other occurrences are in words of Spanish and English origin. Examples are reyna /ˈɾei.na/ (from Spanish reina, queen) and treyner /ˈtɾei.nɛɾ/ (trainer). The diphthongs /oi/ and /ui/ may be interchanged since /o/ is an allophone of /u/ in final syllables. Thus, apúy (fire) may be pronounced /ɐ.ˈpui/ and baboy (pig) may be pronounced /ˈba.bui/.

All consonantal phonemes except /h, ʔ/ may be a syllable onset or coda. The phoneme /h/ is a borrowed sound and rarely occurs in coda position. Although, the Spanish word, reloj, clock, would have been heard as [re.loh], the final /h/ is dropped resulting in /re.lo/. However, this word also may have entered the Ilokano lexicon at early enough a time that the word was still pronounced /re.loʒ/, with the j pronounced as in French, resulting in /re.los/ in Ilokano. As a result, both /re.lo/ and /re.los/ occur.

Stops are pronounced without aspiration. When they occur as coda, they are not released, for example, sungbat [sʊŋ.bat̚] answer, response.

Ilokano is one of the Philippine languages which is excluded from [ɾ]-[d] allophony, as /r/ in many cases is derived from a Proto-Austonesian *R, compare bago (Tagalog) and baró (Ilokano) new.

The language marginally has a trill [r] which was spelled as "rr", for example, serrek [sɛ.ˈrɛk] to enter. Trill [r] is sometimes an allophone of [ɾ] in word-initial position and word-final positions, spelled as single <r>. But it is different in proper names of foreign origin, mostly Spanish, like Serrano, which is correctly pronounced [sɛ.ˈrano]. Some speakers, however, pronounce Serrano as [sɛ.ˈɾano].

The placement of primary stress is lexical in Ilocano. This results in minimal pairs such as /ˈkaː.yo/ (wood) and /ka.ˈyo/ (you (plural or polite)) or /ˈkiː.ta/ (class, type, kind) and /ki.ˈta/ (see). In written Ilokano the reader must rely on context, thus ⟨kayo⟩ and ⟨kita⟩. Primary stress can fall only on either the penult or the ultima of the root, as seen in the previous examples.

While stress is unpredictable in Ilokano, there are notable patterns that can determine where stress will fall depending on the structures of the penult, the ultima and the origin of the word.[7]

Vowel length coincides with stressed syllables (primary or secondary) and only on open syllables except for ultimas, for example, /'ka:.yo/ tree versus /ka.'yo/ (second person plural ergative pronoun).

As primary stress can fall only on the penult or the ultima, suffixation causes a shift in stress one syllable to the right. The vowel of open penults that result lengthen as a consequence.

Ilokano is typified by a predicate-initial structure. Verbs and adjectives occur in the first position of the sentence, then the rest of the sentence follows.

Foreign accretion comes largely from Spanish, followed by English and smatterings of much older accretion from Hokkien (Min Nan), Arabic and Sanskrit.[17][18][19]

Ilocano uses two number systems, one native and the other derived from Spanish.

Mano ti tawenmo?
How old are you (in years)? (Lit. How many years do you have?)
Beintiuno.
Twenty one.

Mano a kilo ti bagas ti kayatmo?
How many kilos of rice do you want?
Sangapulo laeng.
Ten only.

Adda dua nga ikanna.
He has two fish. (lit. There are two fish with him.)

Days of the week

Days of the week are directly borrowed from Spanish.

Like the days of the week, the names of the months are taken from Spanish.

The names of the units of time are either native or are derived from Spanish. The first entries in the following table are native; the second entries are Spanish derived.

To mention time, Ilokanos use a mixture of Spanish and Ilokano:

Also of note is the yo-yo, named after an ilocano word.